With the camera market so rich with selection, it’s difficult for a regular consumer to know what to choose. Even Nikons own inventory can be overwhelming. In the past few months, they have released 6+ new Coolpix models to replace older releases, including the L1 that I took a look at last year. What these current releases primarily bring to the table is upgraded CCD’s capable of more megapixels. I find the megapixel race for point-and-shoot cameras to be a waste of time. A Smart car could have 500BHP, but it’s not going to be that beneficial.

That aside, the L5 is quite similar to the L1, except of the 7.2 Megapixel CCD capable of spitting out 3072*2304 images which hog about ~1.5MB of your storage space. Also identical to the L1 is the Zoom-Nikkor lens, capable of a 6.3-31.4mm focal range. Modest, but not uncommon for “budget” cameras. Aperture is f/2.9-5.0 and optical zoom is rated for 5.0x. Not a bad lens at all really given the price range.

I am not sure who prices these new cameras when they are first launched, but the L5 had an initial SRP of ~$329.99USD. That to me, is rather high given the capabilities. I am a Nikon fan, as is probably evident by now, but $300 for a camera like this is unjustified. Luckily enough, most reputable camera e-tailers are selling it for $240 which is far easier to stomach. Some stores offer bundles for a few dollars more that may be worth paying attention to also.

All of that doesn’t matter if the camera is less than great though.

Before we move on, I should make clear how Nikon classifies their cameras. We are taking a look at an L5, which is part of the Lifestyle series. These cameras are designed for everyday shooters who want a simple camera for the sole purpose of taking snapshots. There is extra functionality and control here, but not as much as on other higher-end models. It’s a series perfectly suited for people who don’t want to learn how to properly utilize a camera… they just want to turn it on and click the shutter release. The next step “up” is the S, or Style. These cameras are more compact generally than anything from the other series, coupled with far better styling. They are designed to be sexy, which is why they have Kate Moss rubbing her S9 in the TV commercials. 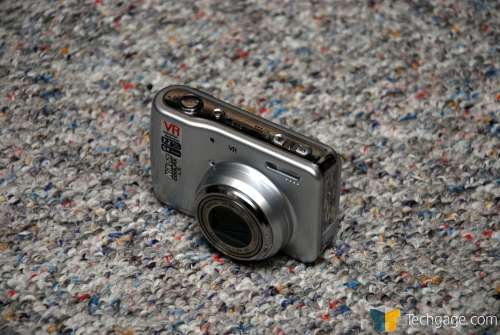 Lastly we have the P series, which is for Professionals. Of course professionals are likely to use SLR’s, but these cameras are designed for photographers who know what they are doing, and don’t want to lug a huge camera along with them. The P series is the most expensive of anything else in the Coolpix lineup, not surprisingly.

Now that you understand how the cameras are classified, you can likely understand what to expect from the L5 before reading any further. It’s an entry level camera, that offers decent image quality, but is overall easy as pie to use. 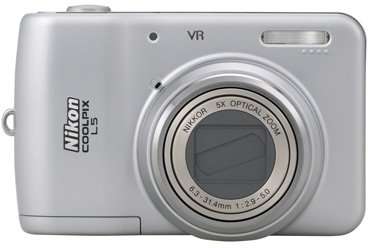 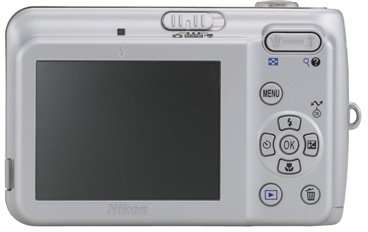 As mentioned earlier, the lens used here is a 6.3-31.4mm f/2.9-5.0 which actually isn’t too bad for a budget model, but nothing that will blow socks off either. The effective zoom is 5.0x which could prove fun to utilize in various situations. You can push the camera beyond it’s normal 5.0x zoom by moving into digital zoom territory, which will give you around 126mm at max range. As you can imagine though, the overall image quality is horrible at this zoom. There’s less noise at a Metallica concert.

The LCD screen is identical to other L series, including the L1. It’s large, at 2.5″, but only offers a 115,000-dot resolution. 115K may be suitable for a 1.5″ LCD, but at 2.5″ you cannot very well wager how good an image looks. Effectively, the screen is good only to make sure that you have the right proportion. Since the camera lacks a viewfinder like so many other Nikon models, this is your only option.

What makes this camera shine is the VR, or vibration reduction feature. I am unsure whether this is built into the actual lens or the body itself, but the fact is that the feature works well, so it doesn’t really matter. If you are unaware, VR essentially reduces the need for a tripod. Canon has Image Stabilization which is essentially the same thing. Though it’s a great feature to add, it does add more to the cost of the camera overall, but many will argue that it’s well worth it. Personally, I love VR… well worth the extra cash if you want to go and walk around without a tripod. 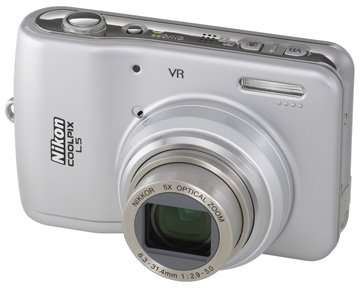 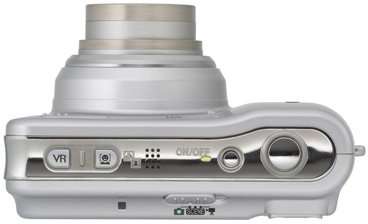 The flash equipped is good up to the 18ft range, and the camera has built-in modes such as red-eye reduction and slow sync. There’s also a slew of included color and shooting modes. The Vivid color mode will increase the intensity of the colors to give you overall vibrant images. Sepia and Cyan is also here, in addition to black and white. Portrait, Sports, Night Shooting, Landscape, Panoramic and Closeup are a few of the 11 scene modes. Panorama Assist is one feature I have come to enjoy with the Coolpix series. Essentially, with the camera attached to your tripod, you snap a photo, and the camera will show a 30% overlay on the screen. You then turn your camera to match up with the scene again, and snap another photo. It’s a rather “simple” feature, but one that can prove useful for small panos.

Being the “Lifestyle” camera that it is, the performance is seriously lacking. In continuous shooting mode, the camera can keep up to 0.7 frames per second. The Multi-Shot 16 mode, which takes 16 simultaneous photos and places them in a single picture, is around 5FPS overall which is aided by the lack of a flash.

As it is, the specs match what you’d expect for a “Lifestyle” camera but are not horrible by any means. The addition of the VR as I mentioned, is a large benefit. Though it seems like such a small feature, it’s actually very useful and one I’ve come to rely on quite often.