The process of purchasing a digital camera can be a gruelling one. If the vast selection doesn’t tire you, then all of the feature comparisons between the different models can be. The fact is, for those who don’t know what to look for or what they want, picking out a camera is difficult. It could even be compared to purchasing a car. Though obviously not of the same price bracket, D-SLRs are still expensive enough to be considered an investment, and one that you want to make sure you don’t regret.

Choosing a camera can be difficult, but diving into the D-SLR realm in general is easier than ever, and more affordable than ever. For the most part, any Canon or Nikon should cater to all of your shooting needs, but others are quickly catching up, such as Sony with their alpha series, Pentax and even Samsung. But at the end of the day, Canon and Nikon have the best overall support (and a huge lens assortment), so for the novice or professional alike, you cannot go wrong with either.

But the process of picking out a new D-SLR or a new car involves similar steps. You want a model that offers sufficient performance, great mileage, is well-built, looks great and of course, is one you can afford. Nikon’s latest consumer D-SLR, the D60, hits all of those right on the mark.

When Nikon launched the D50 in 2005, it came at a perfect time. D-SLR’s were starting to explode in the marketplace, and novice photographers began to realize that higher-end cameras weren’t just for the pros anymore. Prices began to come down, and for a modest investment, you could hook yourself up with an impressive piece of kit. Fast-forward just three years to today, and we get even more for our money. 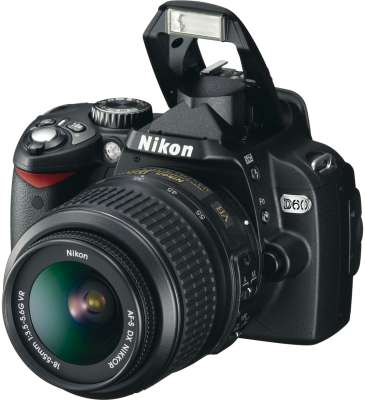 The D60 is a follow-up of sorts to the D40/D40x and the base kit ships with an SRP of $750, and that’s what all e-tailers and retailers seem to be selling it at right now. That price of course includes a kit lens, which in this case is a brand-new 18-55mm f/3.5-5.6… now with more VR (Vibration Reduction)! It can be argued that VR on a lens with such a short focal range is pointless, but it’s nice to have regardless, especially for night time shooting.

I am going to assume those most readers of this review are looking at the D60 to be their first D-SLR, so I will start fresh. First, who is it for?

The D60 is for those who’ve come to the conclusion that their point-and-shoot camera is not spitting out acceptable images, and want to see better. It’s for those who want a lightweight (2lbs) camera, but are not willing to forfeit sharpness and clarity.

It’s for soccer moms, soccer dads, aspiring photographers, professional photographers… pretty much anyone. Granted, the professional is not going to use this camera as a primary, but it’s a good backup choice thanks to its overall quality and lightweight build.

Lastly, it’s for those who have $1,000 to spend on a great camera setup and are looking to stretch every last penny as far as it can go. On the next page, we’ll delve into this more and also tackle the camera specs and feature set.