Though not always necessary, I usually recommend to anyone looking to purchase a D-SLR to be open to a reasonable budget, instead of penny-pinching, because most often, you are going to wind up with a kit configuration or camera you are unhappy with. Most people get suckered into the D-SLR realm thinking that all they need to purchase is a camera, and sometimes that’s the case, but for those looking to get the most out of their new toy, there are other accessories to consider.

The most notable accessory is an external flash. Nikon’s own models are called Speedlights and their benefits are simple… it’s a higher-powered flash with the ability to rotate. I won’t get too deep into the benefits, but simply put, when used properly you will be able to deliver far better-looking images. With the straight flash, the natural look will be lack. This won’t apply to shots where there is sufficient natural light. Speedflashes are only used to provide ample light so that a quick and clear picture can be taken.

Other potential accessories could include a camera bag and a better strap. I am not the definitive source on bags and straps, but I have always enjoyed Lowepro’s offerings for bags, and since they are found in almost any camera shop, they are easy to locate. For straps, I like the Pro series from OP/TECH USA. They are comfortable and add sufficient elasticity, which is easier on the neck than the stock strap. Aside from a camera bag and neck strap, anything else is for personal preference and is unnecessary for a starting kit.

Once said and done, picking up the D60, a camera bag, neck strap and Speedlight, you will be right under the $1,000 mark. For those who don’t believe they’ll need an external flash, then you could fore go that right off the bat. I’m confident you’ll realize how important one is soon enough though. If you plan on only shooting outdoors (with a lot of sunlight), then an external flash is not necessary. 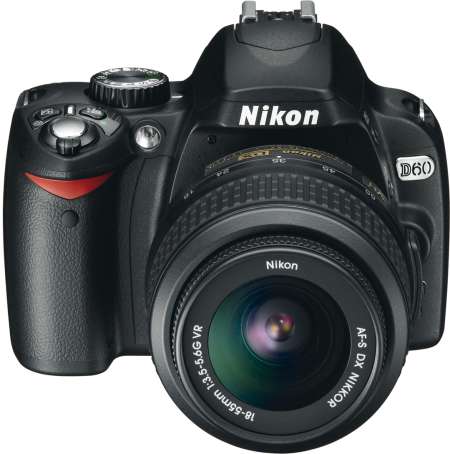 That all aside, the D60 is a great-looking camera, regardless of its cost. Utilizing a 23.6×15.8mm CCD, we are able to shoot 10.2 megapixel images with a full resolution of 3872×2592. To someone coming from a point-and-shoot, that might seem excessive, but it’s not. Unlike a point-and-shoot, a D-SLR’s 10.2 megapixel image has far better clarity, so it could actually be used for large printouts and will also allow better cropping capabilities.

As mentioned earlier, the D60 launched aside a brand-new lens, the 18-55mm f/3.5-5.6G VR. While it features the same focal range and aperture as the previous D40/D40x/D50 kit lens, this is the first to feature vibration reduction, helpful for when lighting conditions are less than ideal, or when there is excessive movement. On a bright sunny day, though, the VR will have little use unless you are using a sky-high aperture. 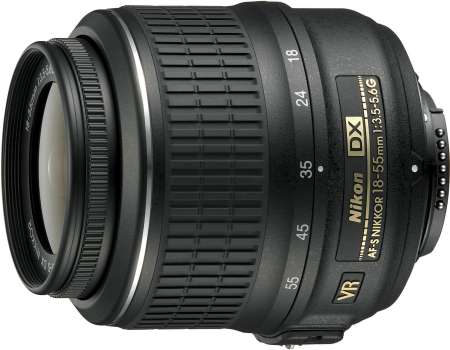 This lens is made great by the fact that it’s very light, but for those who are looking for a longer range, an upgrade might be a good idea. For the beginner, there are a couple of options. You could purchase the D60 body only, and choose your own lens, or pick up a secondary lens that has the sole focus (no pun) of delivering long-range shots.

The second option as I mentioned would be to purchase second lens, in which case I’d recommend the 55-200mm f/4.5-5.6 ED VR, which retails for around $220. The downside is that you would need to swap lenses whenever you need a longer range, but you cannot get that kind of range with a single lens unless you are willing to pay $700 for the 18-200mm f/3.5-5.6 VR II.

Aside from all of that, the 18-55 VR is a great lens. We’ll get into quality specifics later, but novice or pro, you are going to enjoy the fast speed that the auto-focus provides.

On the next page, we’ll take a quick look at the back of the camera, and also the on-screen display.