A huge computer chassis deserves a huge CPU cooler, and when you need one of those, Noctua delivers. With its NH-D14, the company seems to have had the goal of delivering the largest cooler possible that could still fit on most ATX motherboards, but with that size comes extremely good performance even low noise levels.

giÂ·ganÂ·tic Â (jahy-gan-tik)
adj.
1. Relating to or suggestive of a giant.
2.
a. Exceedingly large of its kind: a gigantic toadstool.
b. Very large or extensive: a gigantic corporation. See Synonyms at enormous.
[From Latin gigs, gigant-, giant; see giant, or from Greek gigantikos (from gigs, gigant-, giant).]
giÂ·gantiÂ·calÂ·ly adv.

I have had the pleasure of testing most modern heat sinks in my time as a PC enthusiast. In the beginning, I was doing it on a personal level as an end user before I joined the team at Techgage. Things were much simpler back then as I only needed to satisfy my own needs. Currently as a reviewer, I am required to test them at far greater lengths with emphasis on the little details that would not cross the minds of most people as they install their newest cooling device.

Noctua is one of the originators of the tower heat sink. The NH-12U was first released upon the world back in 2005 when overclocking was coming into the mainstream enthusiast’s domain. At that time, we were pushing our AMD64 and Pentium 4 CPU’s to unheard of levels of speed, and with that effort came a plethora of heat. Dual-core CPU’s quickly followed and the race was on to cool our ever-hotter processors while trying to maintain our hearing.

At the same time, noise also became a major factor in the choice of many a user. Here again, Noctua took a key role and supplied us with some of the best performing and quietest parts available. Based in Austria and with the help of Taiwanese cooling specialist Kolink International Corporation, it started on a path to deliver the most powerful AND silent cooling solutions available. No one can deny its cooler’s quality and performance as well as its role in the development of heat pipe cooling.

Today we are looking at their latest incarnation, the NH-D14. There is no doubt in my mind that I have unboxed the largest heat sink to ever cross my path. While I am the first to agree that size DOES matter when it comes to air cooling, there does come a point in time where something could be just too large for its own good. Let us take a closer look at this beast and see if there is anything good or bad to be said about size vs. performance.

Once out of the well-packaged box, we get our first look at the NH-D14. Right away you can spot the trademark Noctua fan colors which is truly a love it or hate it scheme (which I personally do LOVE it). In addition to this is its trademark logo proudly embossed onto the top fins should you have any doubt to which manufacturer produced it. Despite the look, there are no sharp edges waiting to draw blood at the first slip. I would still use a reasonable level of caution here, but you will not be punished for that split second of not paying enough attention. 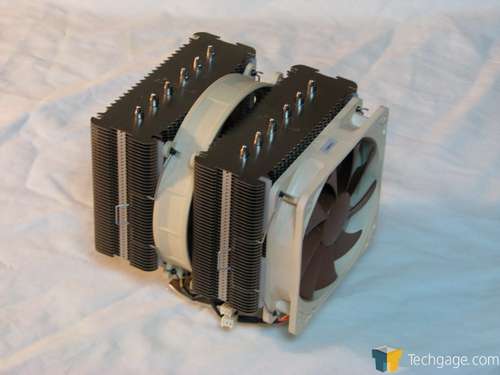 Turning it around gives you a better look at the fin area. The serrations are a specific design to break up the air in order to aid in keeping the fan noise to a minimum. The designers were also kind enough to put slots in all sides for the fan insulators should you decide to change their orientation. 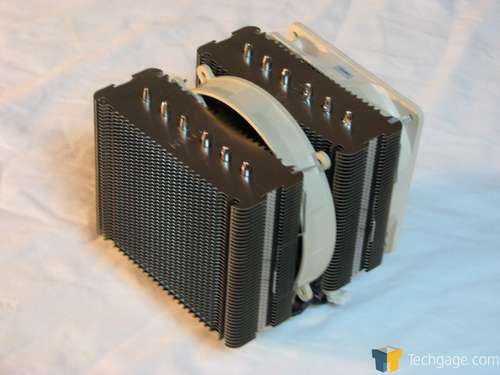 Underneath the massive fins lies the heart of the cooler. Six large heat pipes wind their way through the base and up the rows of fins. You can also see just how deeply the middle 140mm fan nestles in towards the base. 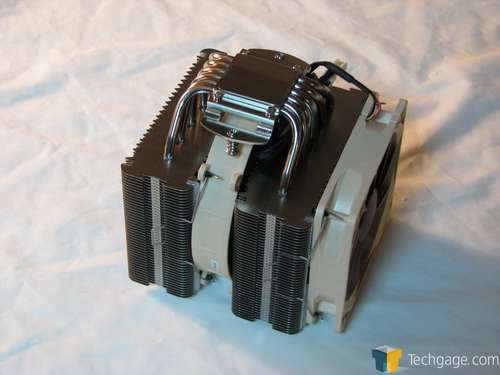 Both fans are held in place with quick-release clips that are as simple to use as they appear. This is an excellent design and I wish more companies put this type of thought into fan retention mechanisms. I cannot state strongly enough how much I despise those rubber pull through retainers that easily break, as well as the difficult wire clips that can make a priest swear when trying to install the fan inside the case itself. 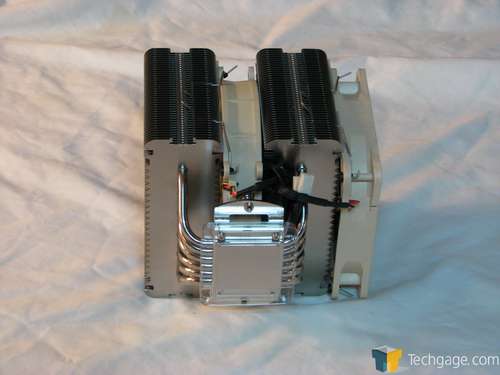 The mounting base of my particular review sample was ever so slightly convex shaped that was nearly impossible to see with the naked eye. Using a straight edge was the only means to truly see this. The finish was free of any nicks or scratches. The retention mechanisms are held in place with easy-to-remove screws should you need to ready it for the AMD platform. It does come with the Intel retainers pre-installed. 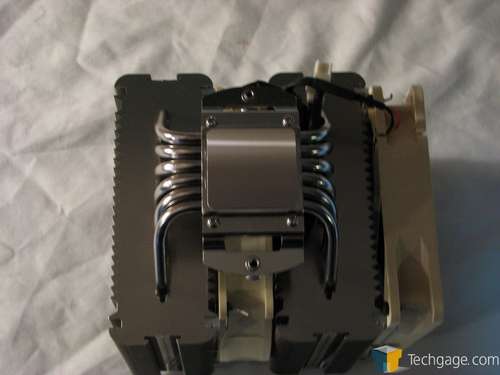 The included accessories and hardware come neatly packaged according to which platform you plan to run. I also LOVE the included screw driver. No other company does this and there is nothing worse than having to search for one when trying to do your install. There are also printed quick install directions included. As for the Intel hardware, I found the base plate to be simple to install on our LGA1156 platform and the design is well thought out. A good sized portion of thermal grease is included as well as adapters to under volt the fans for even quieter functionality. 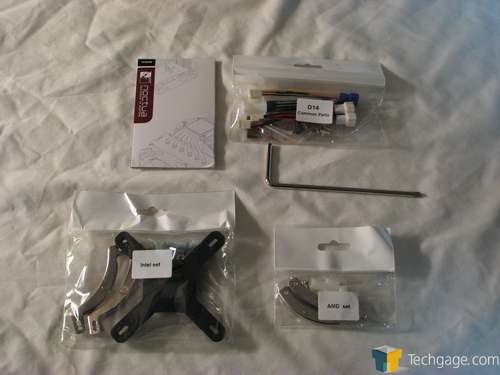 Now comes the part that honestly has given me a level of anxiety that I have not had for this type of product for some time; the installation. The sheer size of it is somewhat overwhelming, although I do have to say that at just over 1200g it is not as heavy as I expected. While you certainly need a good back plate as the one included, there is no need to worry about any damage to your motherboard.