by Jamie Fletcher on December 30, 2016 in Editorials & Interviews, Software

GPUs have come a long way over the years, and NVIDIA is pushing boundaries for what to expect from our investment. GPUs are for more than just rendering games; they’re also for offering full immersion and sharing our experiences with others. We’re taking a look at GeForce Experience, a comprehensive tool that lets you utilize your GPU to capture, share, optimize, and sometimes, even win!

Sometimes, all you want to do is shoot people in the face for an hour from the comfort of your sofa, but you don’t want to distract your loved one’s season finale on TV. You have a beefy PC in the other room at the ready, and a tablet, what do you do?

If you have a GeForce GTX 600-Series or later GPU, and an NVIDIA SHIELD device, you can stream your desktop games to it. Your PC does the legwork with all the rendering, while the SHIELD shows you the results.

This low latency wireless setup and gaming experience is streamed through the GeForce Experience app. While there is a small performance hit to frame rates, any streamed games will run pretty much as if they were native. What’s really nice about this feature is that if a game or store client (eg: Steam, Origin) requires an update, it won’t become a roadblock thanks to the fact that you’ll be able to use Windows as soon as you connect, allowing you to take over the mouse with your SHIELD device to click what needs to be clicked. Afterwards, the game will launch right up.

As an aside, you can read our review of NVIDIA’s SHIELD Android TV right here.

Your graphics card can not only render games, but with the help of GFE, it can save your playthroughs or stream them across different services, such as Twitch or YouTube. Sharing your gaming sessions has become a big part of the modern Internet with ‘Let’s Play’ videos popping up all over the place. Not only does it allow others to see what you are doing, but also interact with you in real-time, while you are playing.

However, no one will want to watch your stream if your game is running at 15 frames per second because you can’t encode the video fast enough. All modern NVIDIA GPUs now come with a dedicated video encoder on-chip. This means that your CPU isn’t taking the brunt of the encoding task, slowing your game down in the process.

The built-in encoder does have a small impact on performance, but this is no more than 3%, so we’re talking less than 1 FPS loss in most cases. The recorder is quite configurable too. It does not save raw, uncompressed video, so it won’t burn through your disk space like a few other utilities. You can set different locations to store the temp video and the final saved video too.

The compression rate is also configurable, ranging from 10 to 130 Mbps for locally stored gameplay, so if you plan on recording 4K at 60 FPS, you can do so with almost no perceptible loss in image quality. You can also limit frame rates while recording to 60 or 30 FPS (which is mainly to prevent audio sync issues with variable frame rates).

For streaming, you have a greater deal of flexibility. If your Internet connection is decidedly lacking, recording your game play first and then uploading later might be best, but if you have a moderate to great connection, then live streaming becomes an option.

GFE’s streaming options are quite impressive, as it will not only stream directly to Twitch or YouTube, but it will let you set the resolution independently of the game (downscaling while encoding). This means you can play at 1080p but stream at 720p, without affecting your own performance. You also have even tighter control over image quality, by restricting it from 1 to 18 Mbps, with resolutions including 360p, 480p, 720p and 1080p, in either 30 or 60 FPS. If that’s all a bit complicated for you, there are some presets you can use instead, but that fine control is just a click away.

Another cool feature is the Instant Replay. Playing a real tense match then miraculously pull off six 360 no-scope headshots in a row within 5 seconds? Bummed out because you weren’t recording? GeForce Experience lets you record constantly in the background on a loop with its Instant Replay feature, so that when that fateful moment arrives, you can instantly save the last few minutes of gameplay. You can set the loop time from 30 seconds to 20 minutes, with the same quality control as the live recorder. It won’t automatically upload that replay to a streaming service, but it lets you do it later.

If video isn’t your thing, screenshots are possible too, all from the same GFE menu or customized hotkeys. You have the option to upload to either Imgur or Google Photos (with hopefully more services offered down the road), or deal with them after the fact – they are saved as PNG and are located in the same folder as your outputted videos, which can be configured inside of the overlay.

GFE is a helpful tool for new users and seasoned veterans. Simplifying game settings and setup, checking system capabilities, updating drivers effortlessly, and streaming your triumphs and amusing failures to the world. You can even record your desktop if you want to do guides/presentations or show browser games off (although there is a privacy safeguard in the options to prevent this if you wish).

There are a number of system checks it can perform too, such as showing you if your system meets the requirements for Virtual Reality. Do you have enough RAM, CPU powerful enough, perhaps a better GPU is required? While NVIDIA can’t help with the costs of Head Mounted Displays such as Oculus Rift or HTC Vive, you can check if your system is up for the challenge. 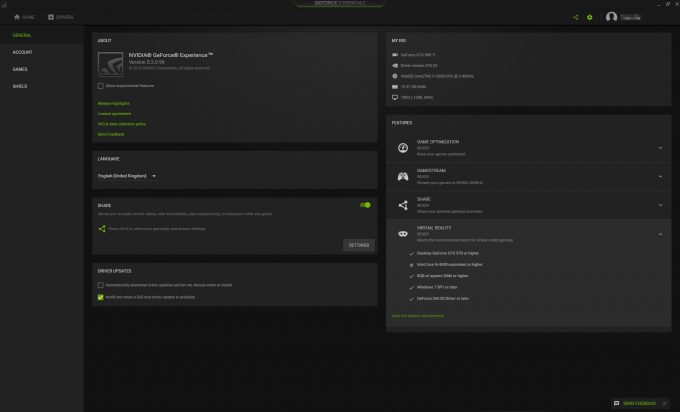 If there were a couple of things I’d like to see changed in GFE, it would be a small improvement to the screenshots section, since not being able to browse them first seems odd, and the location of where they are stored is not shown or intuitive. Originally, I had thought the pictures disappeared after a reboot, but they were later found in the rather odd default ‘Video’ directory.

The other thing I would suggest changing, would be the default shortcut key to bring up the main overlay for streaming and recording, which is Alt+Z. While innocent enough, this shortcut is picked up by most Adobe products when using Ctrl+Alt+Z, which is used for repeated undo. Fortunately, NVIDIA lets you change all the shortcuts under the GFE options – it’s just confusing the first time it happens.

GeForce Experience regularly lists special offers for new hardware, as well as giving away free games and running contests every now and then. When prompted about a new driver, you might just spot a chance to score a brand new system or GPU upgrade in the process.

Going beyond a simple driver package, GFE is a helpful tool that extends the use of your graphics card. You don’t need a high-end GPU either to take advantage of it, even notebooks and laptops with NVIDIA GPUs can take advantage of the streaming and recording. Check it out and you might find it more useful than you realize!