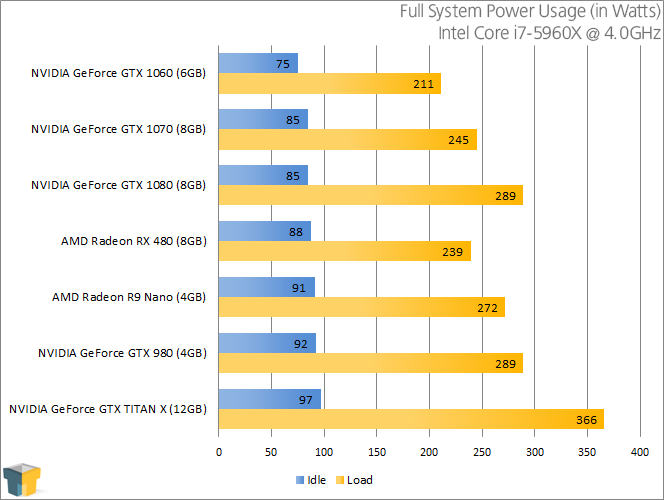 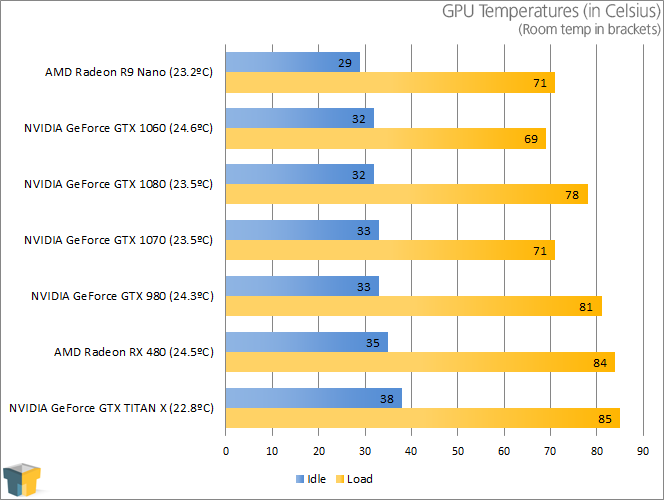 In the launch article for AMD’s Radeon RX 480, I noted that the card’s power draw was much greater than its competition, but in between then and now, I realized there was a major fault which led to the result being inaccurate. Long story short, at some point after benchmarking NVIDIA’s GTX 1070 and before testing the RX 480, Windows 10 decided to exercise its search indexer quite hard after boot, and sometimes even after 10 minutes of the PC sitting idle at the desktop.

It seems bizarre that the search indexer could cause such increased power draw, but I ended up experiencing the same issue with the GTX 1070 reinstalled, and the issue went away after I finally disabled the service. That all said, the power draw for the RX 480 seen above is (finally) accurate.

As the lowest-end NVIDIA card in this particular lineup, it’s no surprise to see the GTX 1060’s power draw reflect that. It managed to shave 10W off of the GTX 1070, and place 28W lower than the RX 480. As for temperatures, the GTX 1060 also becomes the coolest-running card in this lineup, not even managing to hit 70°C. It’s not often we see that kind of result from an NVIDIA-designed cooler.

I am going to keep this conclusion short and sweet, because chances are good you already knew of what the GTX 1060 was made of before even clicking on the review.

As expected, the GTX 1060 is faster than AMD’s RX 480, and in some cases, the gain is notable. A safe bet would be “10% faster”, and sometimes, it might actually hit 20%. That’s a far greater gain than I would have ever expected, but NVIDIA’s reviewer’s guide for the card highlights the same kind of gains in select titles. For example, NVIDIA achieved a 22% gain in Metro Last Light Redux, whereas I hit 18%. Again, it should be noted that I was unable to retest using a post-launch driver for the RX 480. Those improvements still wouldn’t tighten the gap a considerable degree, however.

At 1080p, the smallest gain I saw with the GTX 1060 was 8%, which was with The Witcher 3: Wild Hunt. NVIDIA itself shows even smaller gains in select games, such as The Division, where the difference was 1 or 2%.

Overall, it’s safe to say that the GTX 1060 is about 10% faster than the RX 480, and even in the worst case it should still prove faster. Exceptions we saw were with Hitman‘s DirectX 12 test, and also DOOM‘s Vulkan test – the latter of which gives a serious nod to AMD.

Need a tl;dr? The GTX 1060 is faster than the RX 480, uses less power, runs cooler (based on each company’s own designs), doesn’t support SLI, has an ample 6GB framebuffer, is very overclockable (based on fairly quick tests), and costs $10 more than AMD’s RX 480 8GB reference edition.

While it would have been nice to have seen AMD last longer in first place in this respective price point, NVIDIA has successfully bumped it out with its GTX 1060 – ignoring DX12 performance, where each company flip-flopped their strengths, and Vulkan, based on DOOM performance.

This conclusion was not hard to reach; what’s far more complicated is trying to get any of these cards for the price they should be sold at. Based on what we’ve seen from the GTX 1080, GTX 1070, and RX 480, I am not super confident that we’re going to immediately see $249 GTX 1060s. I hope I’m surprised.

Addendum: Some of this conclusion was rewritten to complement our Vulkan performance results, which were added to the previous page after this article went live.