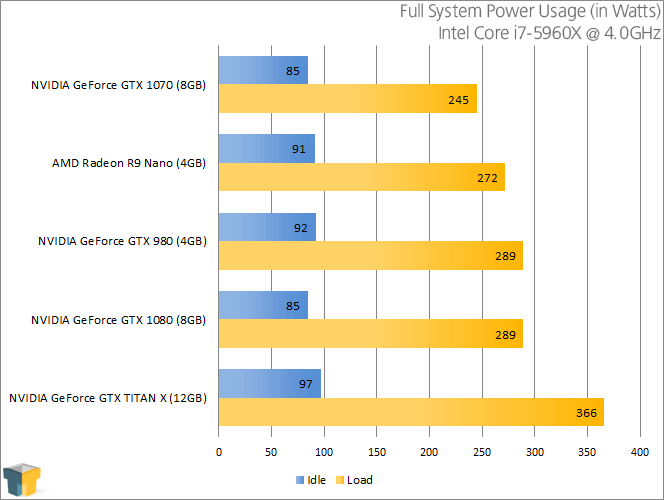 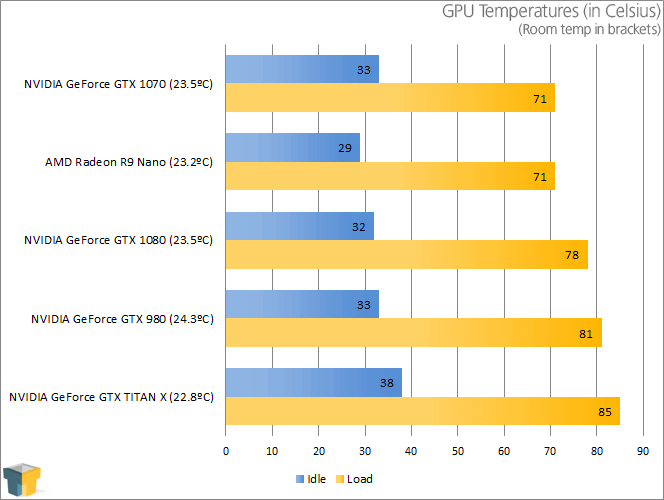 I appreciate awesome performance, but I also appreciate awesome power efficiency – and the GTX 1070 certainly has that. Despite being an essential successor to the TITAN X, outperforming it in almost all cases, it draws a staggering 121W less at load.

That efficiency even carries itself through to the temperature test, where it matches AMD’s modest-sized Nano almost to a T (no other card could touch Nano’s idle temperature).

Not only does the GTX 1070 shave 121W off of the full system load against the TITAN X, it likewise shaves 14°C off of the load temperature as well. This level of performance at 245W makes me really excited. With each new GPU generation, there’s a reduced chance that I’ll blow fuses while testing. Love it!

Considering the fact that the GTX 1070 performs better than last year’s $999 TITAN X, it probably won’t surprise you to learn that there’s no ideal competition for it right now. That’s not even going to change with AMD’s Polaris, at least not based on what we know about it. The RX 480 is due to be the highest-end Polaris released, and at $200, we can’t expect it to deliver performance on par with the GTX 1070, which costs twice as much.

We could be surprised, though. It could be that AMD has another Polaris card in store that’s higher-end than the RX 480, but at this point I am not too sure about it. AMD has rattled off the same message for a while: high-end will come in the form of Vega, due much later than Polaris. 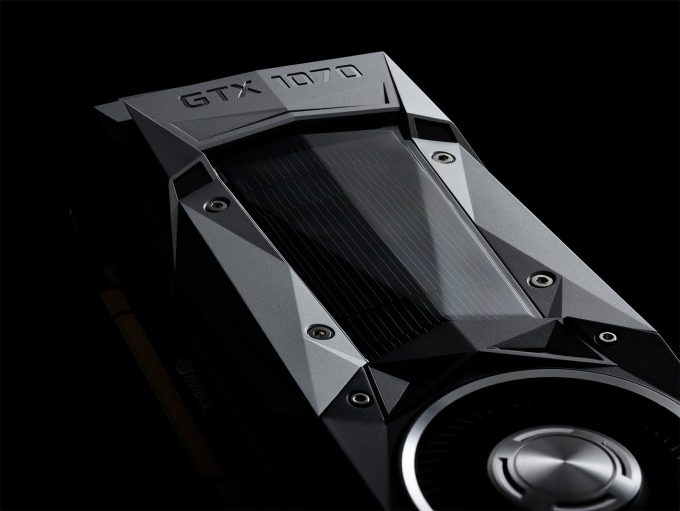 This is actually a bit of an odd situation we’re in. It’s not often that two GPU vendors decide to launch new series within a month of each other and target entirely different price-points. Right now, NVIDIA handles $379 and $649, while AMD’s upcoming RX 480 settles in at $200 (for the 4GB version; 8GB will likely be $249). The other Polaris cards, RX 470 and RX 460, will be lower than $200 (as common sense would imply).

What this ultimately means is that to match a card like the GTX 1070 with AMD’s upcoming Polaris generation, dual GPUs would be needed to beat out the GTX 1070. While I feel safe in these assumptions, they’re still assumptions until RX 480 reviews go live on Wednesday.

But enough about comparisons that don’t even match up to begin with. What about the GTX 1070? As has been reiterated time and time again, the GTX 1070 is a $379 card that performs like last year’s $999 TITAN X. With its 6.5 TFLOPs of compute power, it’s not even that far behind the GTX 1080, which costs about 70% more for 35% more oomph (and an upgrade to the faster GDDR5X).

That leads me to another important matter: GTX 1070 pricing. At the moment, it’s not easy to find a GTX 1070 that’s being sold at SRP. Both the Founders Editions and third-party models are all selling for at least $449. It’d surprise me if someone could be surprised – we’ve all been through this before. There’s no telling when these inflated prices will drop down, but the fact that the cards are selling like hotcakes doesn’t help. At the time of writing, only one of the sixteen GTX 1070s Newegg lists is available – and it’s $480. That’s unfortunate.

Based on the SRP, the GTX 1070 would be a no-brainer choice for someone planning to game at 1440p or 3440×1440. I’d even consider the slight premium to still make the card worth it (and I am sure etailers agree, which is why the gouging is happening). While the card can handle 4K gaming, it’s going to require a fair bit of tweaking in most titles (I’d imagine MOBA gamers would be safest).

I believe that the GTX 1070 is one of the best cards to have come out in recent years. For its price-point, its capabilities are enormous, and when compared to the previous generation cards, it offers a number of efficiency perks, to boot. As discovered above, the GTX 1070 beats out TITAN X while shaving over 120W off of the load wattage. That’s downright incredible for a single generational transition.