by Jamie Fletcher on May 7, 2016 in Graphics & Displays, Trade Shows

It’s all coming together. NVIDIA’s Pascal comes to consumer cards with the launch of the GeForce GTX 1080 and 1070 GPUs. They’re both faster than a TITAN X, they’re priced lower than a TITAN X, and there’s a whole lot of software unveiled, too. Ansel introduces free-camera screenshots, multi-viewport rendering increases VR processing by 40% – It’s a lot to take in, so here we go.

You wanted a show-stopper, here it is. NVIDIA announced its brand new Pascal GPU, the GeForce GTX 1080, and what a card – a ‘New King’ in graphics. We saw it render, we saw the numbers, it’s the real deal. The performance is greater than two GTX 980s in SLI, it’s twice as fast as a TITAN X in VR… Oh, and it’s $599.

Available on May 27th, the GTX 1080 is one hell of a GPU, and it’s blown many expectations out of the water. The chip has 7.2 billion transistors, 2560 cores capable of running at over 2GHz, an 8GB frame buffer using G5X (GDDR5X) running at 10GHz total clock speed. During a full render scene, we saw it running at 2114MHz (overclocked), running at a cool 67°C. It has a total compute of 9 TFLOPS within a power envelope of just 180 watts.

There are slightly fewer details on the GTX 1070 right now, but it’s still one hell of a card, especially once you see the price. For a start, it’s got a total compute of 6.5 TFLOPS which puts it just ahead of a TITAN X… It has 8GB of plain old GDDR5, rather than the new G5X, and it’ll be made available on June 10th. The price is a rather surprising $379, which is the same territory that AMD was aiming for with its Polaris chips. 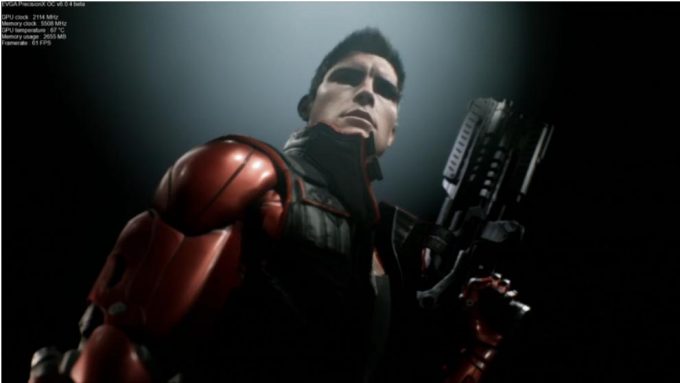 Both cards also come as Founder’s Editions, which are overclocked right out the gate, complete with a number of (undisclosed) goodies. The Founder’s cards will be overclocked, and come with higher price tags: $699 and $449 for the 1080 and 1070, respectively. 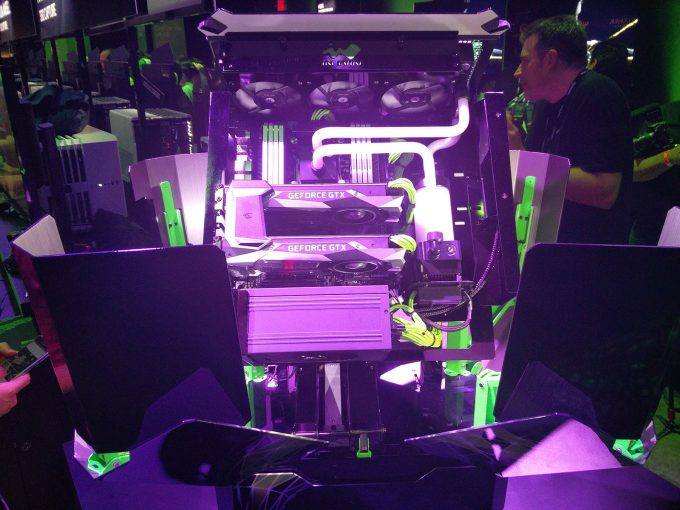 Performance wise, there were two numbers thrown around – in VR (with various additions we’ll cover in a second), the GTX 1080 boasts performance that’s 2x that of a TITAN X with 3x the power efficiency. Outside of VR, the numbers are a little harder to grasp, but we’d confidently estimate it around 30% faster than a TITAN X. So why is one double the performance, and the other a third? It comes down to a couple of new technologies that have been thrown into the mix. Today was more than just the new Pascal GPUs, there was a lot of cool new software features, too.

Today’s announcement may have been all about the new GTX 1080, but there were a number of other announcements, too, and one real oddball was something called Ansel: an in-game camera utility that takes screenshots to a whole new level.

Instead of just taking a single static image, Ansel takes things well beyond your standard resolution – 32x times in fact – to a super-ultra-mega-high resolution of 61,440 x 34,560. That not cool enough? How about a complete spherical image for you to look around in as well? Still not enough? Put that into stereo VR. That still not enough?? How about freeze-framing and moving the camera to any perspective beyond what the game allows… and then taking a screenshot? Ansel even lets you take EXR screenshots for high dynamic range editing in Photoshop. 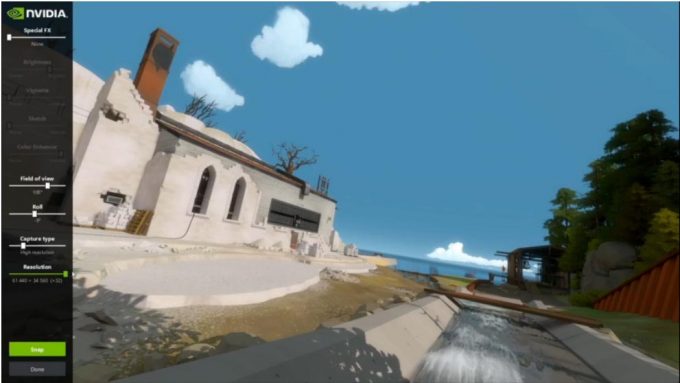 This new atmospheric Ansel engine provided some rather interesting possibilities that go well beyond what a normal screenshot is capable of. What made the concept even more stunning was the ability to transfer it over to a phone/tablet and then view that snapshot with something like Google Cardboard or GearVR. I think we’ll be seeing Ansel a lot more in the future.

This is going to be a little tricky to explain, but bear with us. The way that NVIDIA renders scenes currently is through a single viewport. Multi-monitor setups requires multiple GPUs, each rendering a different viewport (at least for its Surround monitor setup). This proves problematic when it comes to perspective, as the Field of View (FoV) becomes distorted. To make matters worse, these additional monitors are often rotated towards the user, further distorting the FoV. The new multi-projection system allows a single GPU to render up to 16 viewports in a single pass, and this can be used in some rather interesting ways. 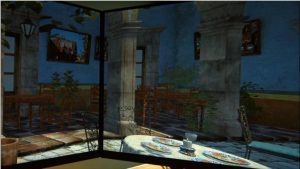 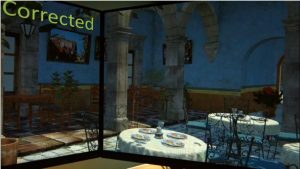 With the Surround Monitor concept, each viewport can be rendered independently, with its own view and own FoV. When put together, it can generate a completely distortion-free render of a scene. This extends the FoV well beyond what you can normally see, and beyond the limits of a single viewport.

This FoV correction extends beyond that of just static monitors, but can also be applied to VR as well. Currently, with the way that VR is implemented in Head Mounted Displays (HMDs), there are a set of optics that give the illusion of pushing the screen away, so as to make it look like you are several feet away from the scene. In order to correct for this, the GPU needs to distort the scene first before displaying it through the HMD.

This has a bit of an issue in that more of the scene needs to be rendered, just so that when it becomes distorted, there are enough pixels to fill the scene. Any excess pixels are effectively wasted after the distortion is applied. With Simultaneous Multi-Projection, each eye is split into 4 different viewports, each with its own perspective and angle. When these 4 viewports are combined and viewed through another viewport, it gives the effect of being distorted, ready for the optics in the HMD. It sounds complicated, but the net result is that less of the scene needs to be rendered to fit each eye. The result – a 40-60% increase in VR rendering performance. 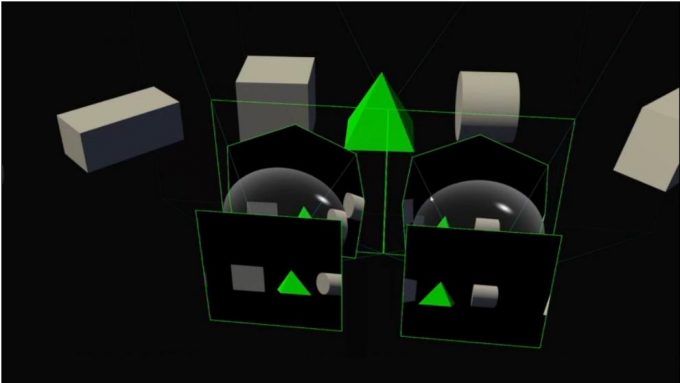 Another trick as well: because of the multi-viewport rendering on a single pass, both eyes in VR can be rendered at the same time in something called ‘Single Pass Stereo’, further reducing overhead. It’s this extra viewport system that lets a single GTX 1080 beat two TITAN Xs in VR.

While it might not get your blood pumping as much as a super-fast and cheap GPU, audio is an important aspect in VR setups as well. Particularly something called spatial audio. While AMD brought us TrueAudio, NVIDIA is going further by combining its audio processing with PhysX. This allows it to process audio in a physically based environment, providing real reflections and reverb, based on not just the spatial detailing of rocks and walls, but also through materials.

This also extends beyond audio, with additional PhysX tweaks for VR as well, such as collision detection and haptic feedback in the controllers for greater immersion. 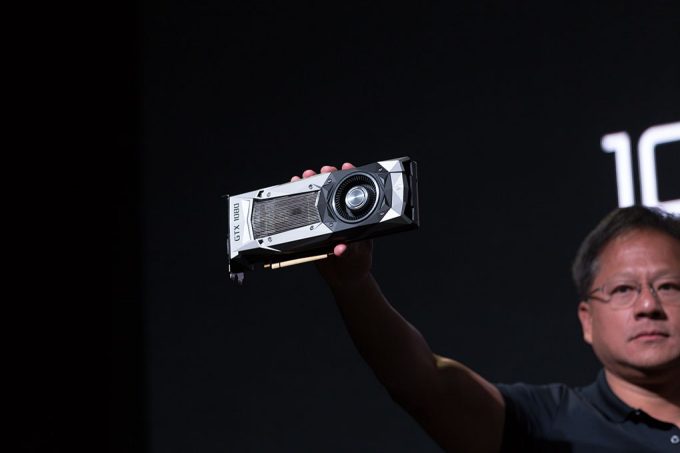 We’ll be getting our hands-on performance benchmarks when the units are in our hands, but just going by the raw performance on show, these cards and the new software tacked on, are one of the biggest leaps in graphics technology in a long time. We’re not ashamed to say it, but this is a very exciting time and long overdue. It now remains to be seen what AMD plans to do for its upcoming Polaris release. We can’t wait.