If you want to dial your gaming to 11, the ideal GPU has just landed: GeForce GTX 1080 Ti. This card might sport an odd-sized 11GB framebuffer, and memory bandwidth of 11Gbps, but what ultimately matters is that it becomes the most suitable 4K gaming card to date (and not to mention, an amazing ultrawide card.)

We’re not quite sure when AMD’s next-generation Vega GPUs are going to drop, except that it’ll be “soon”, but it seems NVIDIA didn’t want to have us grow bored in the meantime. So, it’s just launched a new GPU that becomes the GTX 1080 replacement. It’s called the GTX 1080 Ti (that’s “tie”), and it doesn’t just handily beat out the GTX 1080, it also manages to best the second-gen TITAN X. As a GPU that “goes to 11” should, I suppose.

When NVIDIA unveiled its GTX 1080 Ti last week, I found it humorous that so few people grasped the fact that we were looking at a GPU with an 11GB framebuffer. The 11Gbps memory bandwidth was well understood, but 11GB? It’s such an odd number, but it gets the job done.

If I had to guess, NVIDIA didn’t want to give the Ti 12GB and take away one of the last remaining perks of the TITAN X, which admittedly is more focused at compute than gaming (hence its lack of a GeForce moniker). Nonetheless, what results is a GPU more powerful than the TITAN X for a lot less dough: $699 USD.

Behold: a GPU unlike any you’ve ever seen before: 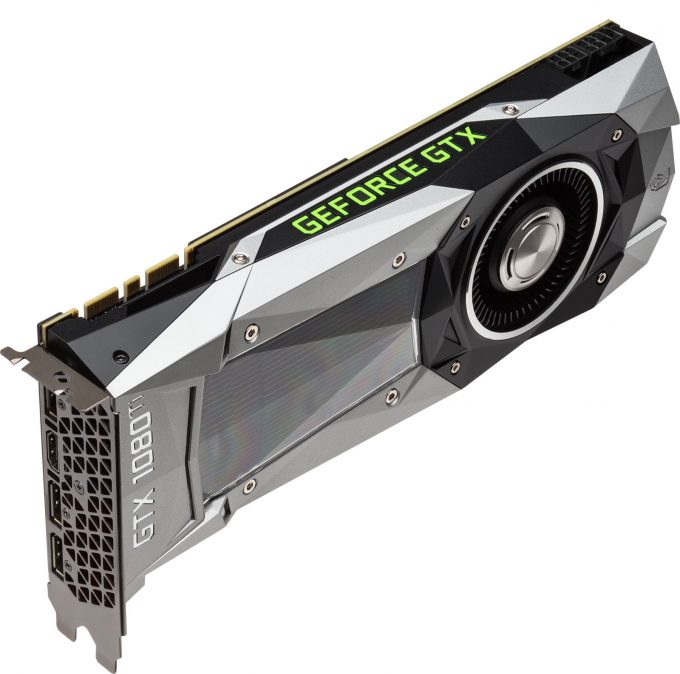 OK, that’s a bit of a stretch, considering NVIDIA has been using this style cooler for a couple of years now. It looks great, cools decent, and supports SLI with the help of a removable backplate. There is one notable change, though, and it’s found at the back:

The GTX 1080 and 1070 Founders Edition had DVI ports that clogged up the back panel; that’s now gone, improving the airflow. Clock-for-clock, this means that this style cooler will drop temperatures by up to 5°C, but because of the improved performance of the Ti, the top-end temperatures are going to be the same as the GTX 1080. In effect, the card delivers higher performance but at the same temperature.

In the slider above, the bare card with its 11 GDDR5X (or G5X, as NVIDIA calls it) chips exposed can be seen. Another shot shows the customized backplate for SLI use; in effect, half of the plate is removed to improve airflow ever-so-slightly between two cards. Ideally, you’d space the cards apart further if you can, but that’s not always possible. If one card hits 84°C in our tests, two sandwiched together will need some good airflow.

Like the GTX 1080, the Ti still features a 250W TDP, although it will draw a bit more from the wall, as its beefier specs would suggest. Also worth noting: while the GTX 1080 has a single 8-pin power connector, NVIDIA’s added an extra 6-pin connector, which should aide in overclocking.

It might seem odd that a GTX 1080 Ti could beat out the TITAN X second-gen, and that’s because it kind of is. But the TITAN X, in typical TITAN fashion, is hard to find in stock, making it an almost impossible option for most people anyway (even Jen-Hsun mentioned its scarcity at his Ti keynote last week). In that way, it’s almost a special edition card to begin with, whereas the GTX 1080 Ti will be easily found for purchase.

It’s interesting to note that despite having a smaller memory bus (32-bit x 11 = 352-bit) compared to the TITAN X, its bandwidth is 10% better thanks to the 11Gbps G5X. Even so, the TITAN X does have two perks: the 12GB framebuffer, and 8 more ROPs. Minor differences in the grand scheme. 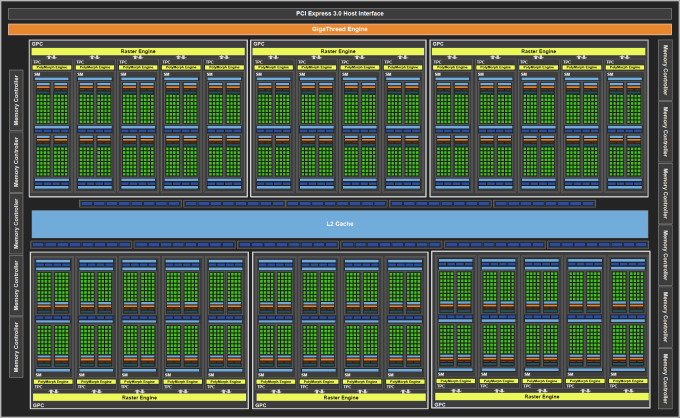 In the diagram above, we can get a feel for the chip’s layout. The difference over the GTX 1080 is that the Ti includes two additional GPC clusters with four SMs inside each (versus five in others). NVIDIA’s Quadro P6000, which we took a look at last month, features six identical GPCs with 5 SMs in each, giving it 3840 CUDA cores. Despite those additional cores, the clock speeds are kept a bit more modest, which means the Ti could still come out ahead in overall performance. Not that the two cards are comparable, of course, but it is worthy of note that NVIDIA does have room for even more cores under that silvery shroud.

Speaking of such comparisons, but not including the aforementioned P6000, here’s another specs look at the Ti in comparison to the other top-end GPUs in NVIDIA’s Pascal gaming lineup:

It goes without saying that the GTX 1080 Ti is the better value against the TITAN X, but that’ll come as a surprise to no one. Heck, it’s not just the prospective TITAN X buyers who stand to gain by waiting for the GTX 1080 Ti – those who’ve held off on the GTX 1080 can now enjoy it for $150 less.

Before diving into performance, here’s a quick overview of what to expect from any one of NVIDIA’s current GPUs:

Six months ago, I had put the GTX 1080 as an “Excellent” ultrawide card, but with some of the recent releases really proving quite demanding, I dropped it to “Great” to be safe. The GTX 1080 Ti replaces that card with Excellent performance at 3440×1440, and Great at 4K.

When we need to build a test PC for performance testing, “no bottleneck” is the name of the game. While we admit that few of our readers are going to be equipped with an Intel 8-core processor clocked to 4GHz, we opt for it to make sure our GPU testing is as apples-to-apples as possible, with as little variation as possible. Ultimately, the only thing that matters here is the performance from the GPUs, so the more we can rule out a bottleneck, the better.

Framerate information for all tests – with the exception of certain time demos and DirectX 12 tests – are recorded with the help of Fraps. For tests where Fraps use is not ideal, I use the game’s built-in test (the only option for DX12 titles right now). In the past, I’ve tweaked the Windows OS as much as possible to rule out test variations, but over time, such optimizations have proven pointless. As a result, the Windows 10 installation I use is about as stock as possible, with minor modifications to suit personal preferences.

In all, I use 9 different games for regular game testing, and 3 for DirectX 12 testing. That’s in addition to the use of three synthetic benchmarks. Because some games are sponsored, the list below helps oust potential bias in our testing.

If you’re interested in benchmarking your own configuration to compare to our results, you can download this file (10MB) and make sure you’re using the exact same graphics settings. I’ll lightly explain how I benchmark each test before I get into each game’s performance results.