NVIDIA has just launched its 8th Ampere-based gaming GPU, coming to us in the form of the $249 GeForce RTX 3050. At its price point, the RTX 3050 is the least-expensive GeForce to include RTX features, like DLSS and RT cores. Let’s see how the latest X050 GeForce card fares across 11 game titles and many synthetic tests.

NVIDIA has just released its newest Ampere-based GeForce: RTX 3050. This card comes to us a mere week after AMD kicked-off 2022’s desktop GPU launches with its Radeon RX 6500 XT. Both that ($199) and the RTX 3050 ($249) are priced in a similar category, with NVIDIA’s $50 premium being tied to the card being a bit faster in the end, and also including a larger 8GB frame buffer.

The GeForce RTX 3050 is a bit of a special release, as it’s the lowest-end card NVIDIA’s put out that still features RTX features (eg: RT and Tensor cores, DLSS, VRS, et cetera). With the previous-gen Turing series, NVIDIA’s lowest-end parts retained the GTX naming, as those RTX features of the bigger Turing cards were not included. It’s great to now see those RTX features at a $249 price-point. 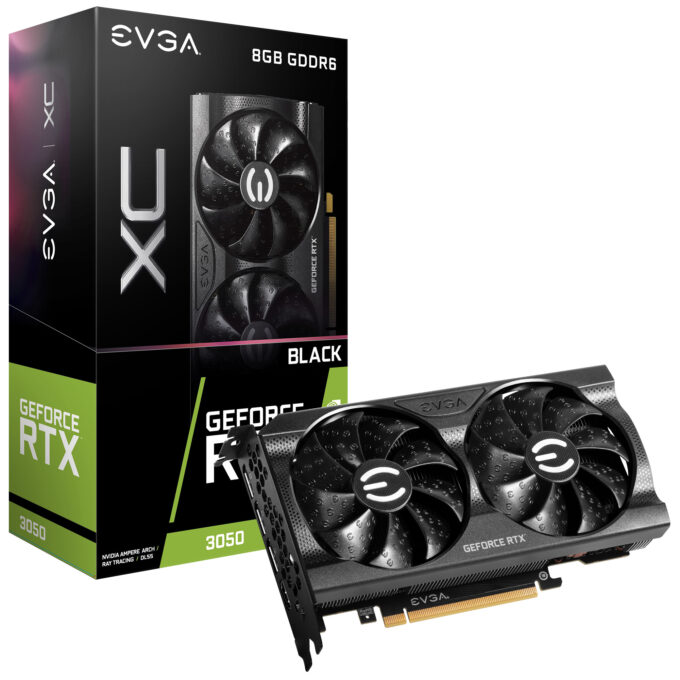 Whenever a CPU or GPU company releases a new product, it’s standard fare to put it up against a previous-generation option, to highlight how far we’ve come. With the RTX 3050, NVIDIA’s foremost comparison is against the GTX 1650, which is a bit of a testament to the times we’re in, since that GTX 1650 retailed for $100 less than the RTX 3050 will. From a pricing perspective, the best comparison should be against the GTX 1660 SUPER, which was priced at $229 (the GTX 1660 Ti went even higher, at $279).

With AMD’s launch of the Radeon RX 6500 XT last week, the same thing was done. AMD compared the new card to a two-generation old RX 570, despite the last-gen RX 5500 XT costing the exact same $199 (which included a frame buffer twice the size). It’s easy to understand why these companies choose the comparison models they do, but for this article, we’re going to stick to the $$$ comparisons, and include both the RX 5500 XT and GTX 1660 SUPER in our test results.

Before we move on, here’s an updated look at NVIDIA’s Ampere-based GeForce lineup:

If you’ve been paying attention to NVIDIA’s Ampere GeForces since their launch, you could likely sum up its overall potential simply looking at the specs. Fortunately, whereas AMD cut down on the frame buffer size of its RX 6500 XT, and not to mention culled the accelerated video encoders, NVIDIA didn’t take the same route with the RTX 3050. While it performs under the rest of the Ampere cards, it still retains the same feature set.

Note: After we had finished testing, EVGA, the supplier of our RTX 3050 sample, alerted us to an issue with the BIOS. The card supplied was an EVGA RTX 3050 XC Black edition, but had the BIOS of a higher clocked XC SKU which bumped the clock speed from 1777 MHz to 1854 MHz. This higher clock model also has a backplate to help dissipate heat. We did not have time to retest with the correct BIOS, so as a result, our performance numbers will be approximately 2-3% higher than they should be.

With that, let’s head into our testing – but first, a brief look at our test system and benchmarking methodologies:

All of our testing is completed using the latest version of Windows 10 (21H2), recent graphics drivers, and up-to-date games. For this performance look, we carried over the five GPUs we tested for the RX 6500 XT review, and augmented the lineup with the last-gen RX 5500 XT and GTX 1660 SUPER. We would have liked to have included additional GPUs in our testing, but couldn’t get more tested in time for embargo.

For our real gaming tests, we’re using nine regular titles, and two focused on esports. As usual, we have a plethora of synthetic benchmark results on the following page. Those results are presented without commentary, but are worth a look if you want to compare any of your own numbers to ours.

As the RTX 3050 primarily targets 1080p resolution, that’s the one we’ve stuck with here. As with the RX 6500 XT review, we’ve added a few new games to our suite: Forza Horizon 5, God of War, and Monster Hunter Rise.

Note: You can download all of the tested setting images at once here (ZIP, 12MB). 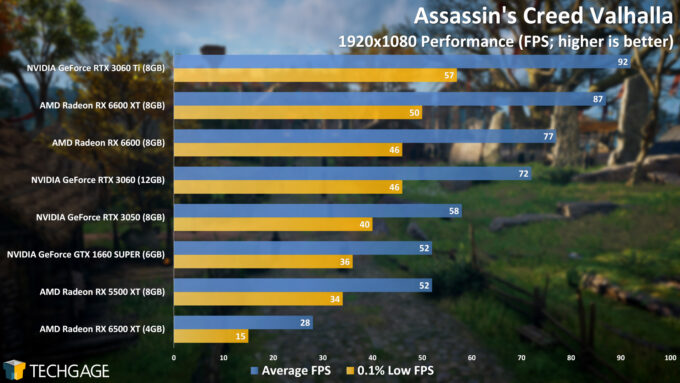 Out of the gate, we see a little bit of a performance uptake with the RTX 3050 over the 1660 SUPER, so it seems like that GPU has turned out to be quite appropriate to test with. It’s easy to understand why NVIDIA has compared this new GPU to the GTX 1650, because if the RTX 3050 just inches ahead of the 1660 SUPER, it would have obliterated the GTX 1650.

Overall, at high-detail, the RTX 3050 handles this game fine at 1080p, although if you are a stickler (like I am) for high frame rates, you may want to reduce detail a bit in order to hit 60 FPS minimum. 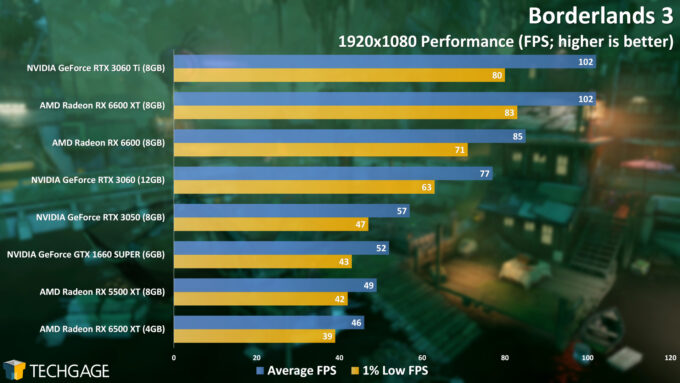 In Borderlands 3, NVIDIA’s RTX 3050 delivers almost the same performance as it did in AC: Valhalla, albeit with a higher minimum FPS. Since this test revolved around the Ultra graphics preset, there’s a lot of room to be made if you want to eke a little more performance out. 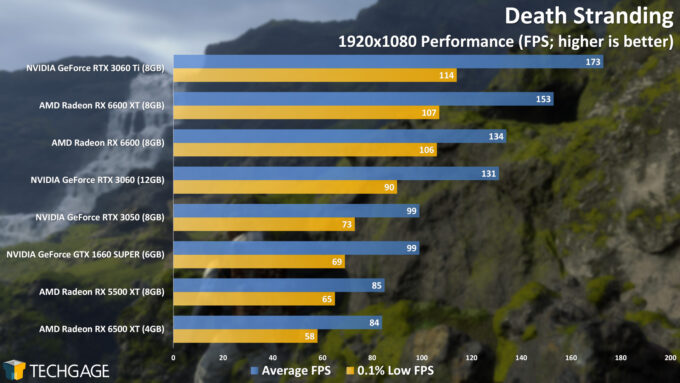 Death Stranding is one of the rarer games that manages to look amazing while not requiring a powerhouse gaming rig to deliver solid frame rates. In the case of the RTX 3050, the minimum FPS keeps well above 60 FPS. 1440p in this game will be no problem with this GPU. In a quick test, we hit about 68 FPS average at that resolution, bumped to 92 FPS when DLSS Quality was enabled. 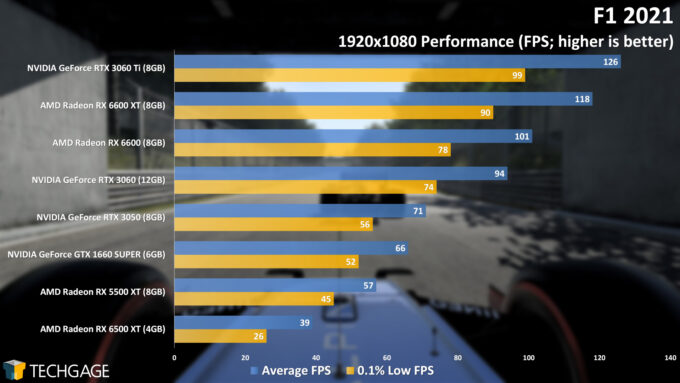 At what’s effectively maxed detail levels, F1 2020 runs ideally on the RTX 3050 out-of-the-gate at 1080p. Performance could be further improved if 1440p is desired, simply by enabling DLSS. That said, we’ve not tested DLSS in-depth in this title since it was released last summer, so we’re not sure if the occasional ghosting issue still exists or not. If you do play this game with DLSS, you should snag the latest DLSS .DLL file and plop it into the game install folder for the best result. 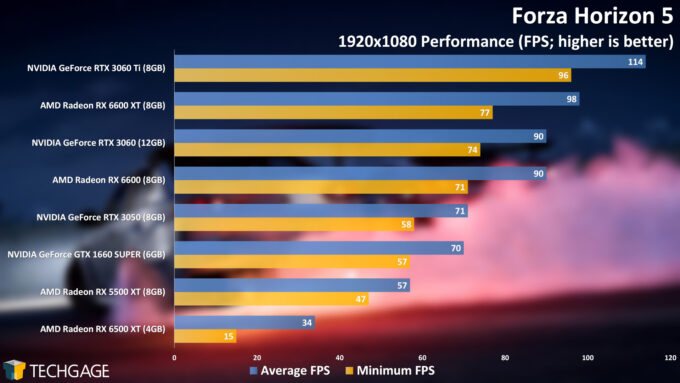 If you were expecting the RTX 3050 to storm past the likes of the GTX 1660 SUPER, you’re going to be disappointed with a result like this. But, there’s little reason to be, as the RTX 3050 hits 70 FPS average at 1080p with high detail, and keeps close to 60 FPS on the minimum. This game unfortunately doesn’t support upscaling features like DLSS or FSR, so you’ll be dropping detail levels if 1440p is in your sights. 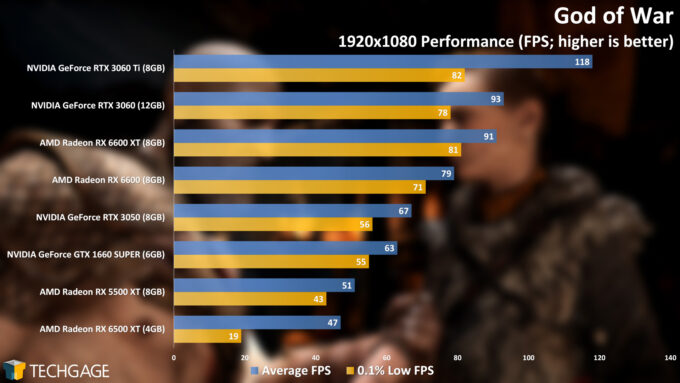 God of War might be a “console port”, but it’s one of the best ones we’ve come across. The game looks good, and the graphics options are simple enough to not be overwhelmed by. Here, we once again see the RTX 3050 not pulling too far ahead of the 1660 SUPER, so if you’re still rocking one of those GPUs, you should be pretty satisfied with its 2022 performance. 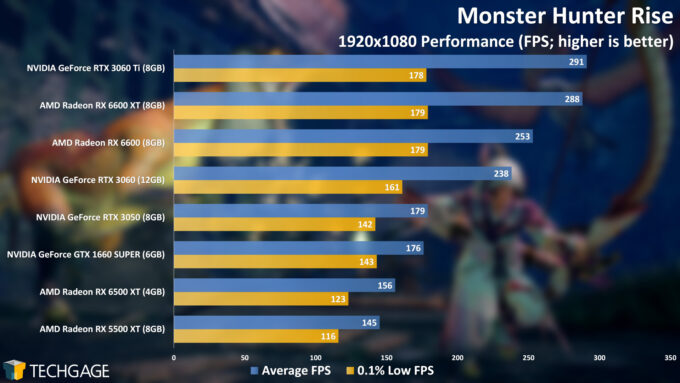 As we covered in our look at AMD’s Radeon RX 6500 XT, Monster Hunter Rise is one of the newest entrants to our gaming GPU test suite, although it may not stick around for long, as it’s simply not that great of a challenge for any one of the current GPUs at 1080p. This is despite the fact that the default image resolution value for the “High” profile is 150%. That said, this game still looks really good, so to experience this level of performance on even lower-end GPUs is pretty amazing. 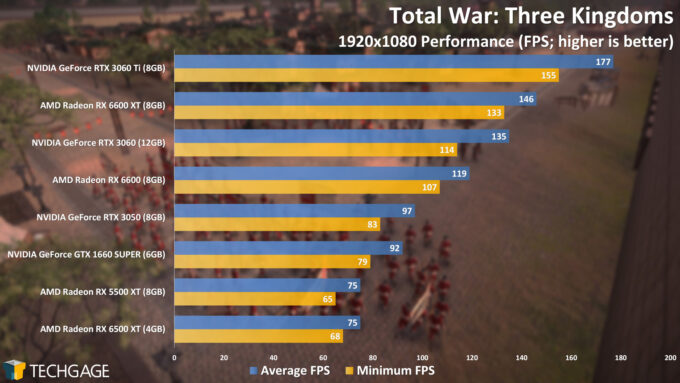 Three Kingdoms, like many Total War titles, has an obscene number of graphics settings to tweak. What’s reflected via results here is not with the game running at nearly its max settings, so regardless of the GPU you own, there will be many tweaks that can be made. With our fairly high graphics setting configuration, the RTX 3050 proves no problem for this game, implying 1440p will be an option for those who yearn for a higher res. 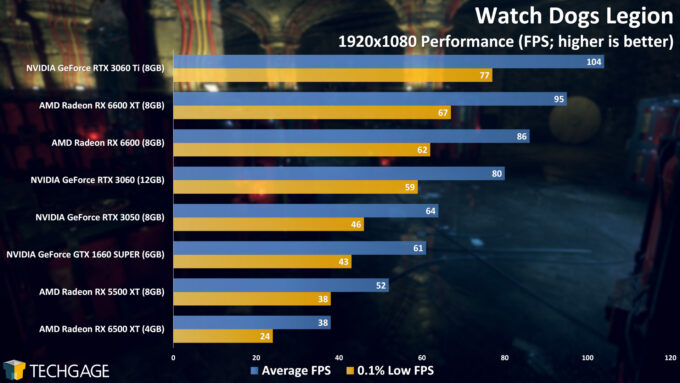 To wrap up our normal game testing, we have Watch Dogs Legion, a game that is still receiving game updates, despite having released nearly a year-and-a-half ago (it’s also one we’re overdue on actually playing). Nonetheless, with 1080p as the target, the RTX 3050 has no problem surpassing 60 FPS average, although the percentile lows might leave a bit to be desired. Like most of the games tested here, there are enough graphics options to tweak to help you achieve the performance / image quality level you desire. 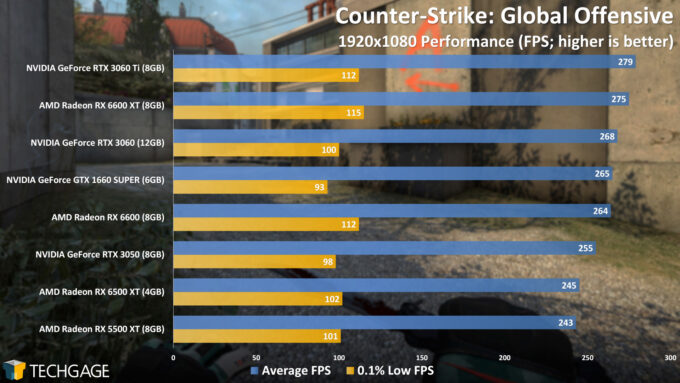 Counter-Strike: Global Offensive runs well on any modern gaming rig, even if you want to achieve a high-refresh (assuming your CPU can keep up). Unlike Siege, which we’ll see next, the minimums leave a bit to be desired, but the overall frame rate is sky-high. 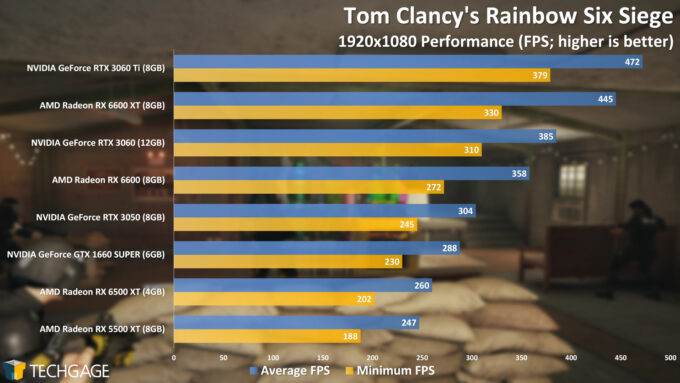 Siege is something else when it comes to optimization. Esports titles are typically bound somewhat by the CPU performance, but even so… we’re seeing performance of close to 500 FPS average a mid-range RTX 3060 Ti. Unlike CS: GO, the minimum frame rate is a lot more reasonable, with even the last-gen RX 5500 XT hitting well over 144 FPS on the minimum.

We’ve splattered the following page with synthetic tests, sans commentary, but encourage you to look there if you want to see how current-gen GPUs scale in various feature tests.