To take a look at the RTX 3060 Ti from a power perspective, we’re using UL’s 3DMark Fire Strike 4K stress test, and the PC plugged into a Kill-A-Watt to monitor for power draw. The PC is left to sit idle for five minutes before that respective value is counted, while the load value is recorded after at least ten minutes of stress. 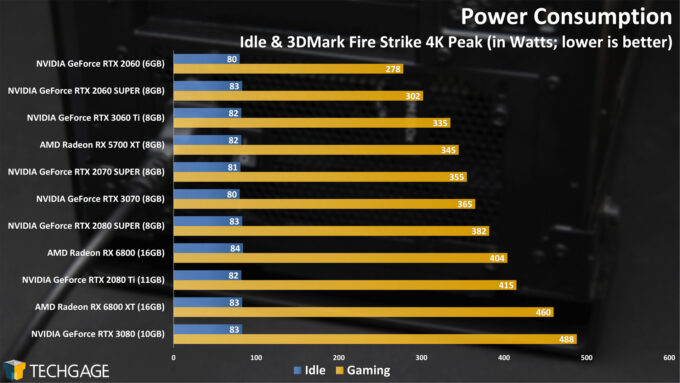 NVIDIA said that the RTX 3060 Ti has a TDP of 25W higher (200W) than the 2060 SUPER, and our real testing with a Fire Strike stress-test shows our delta to be 33W. It’d be great to see the power draw remain the same, but NVIDIA’s at least giving a huge performance boost over the previous generation contender. If you’re a creator who renders a lot, that value is usually further enhanced.

NVIDIA’s GeForce RTX 3060 Ti didn’t bring any real surprises to our testing, but it still managed to prove impressive enough to be easily recommended for purchase. While we haven’t shown our creator results yet, the 3060 Ti on the whole performs great in gaming and rendering over the previous generation, and we think there is a ton of value here for $399.

The unfortunate thing is obvious: we can’t guarantee you’ll be able to score a new 3060 Ti for that price, and to say that the availability issues are frustrating would be an understatement. Word on the street is that supply of the 3060 Ti is better than the three previous Ampere cards, but we’re a week overdue on getting this article up, and there’s still no availability at Newegg or Amazon. 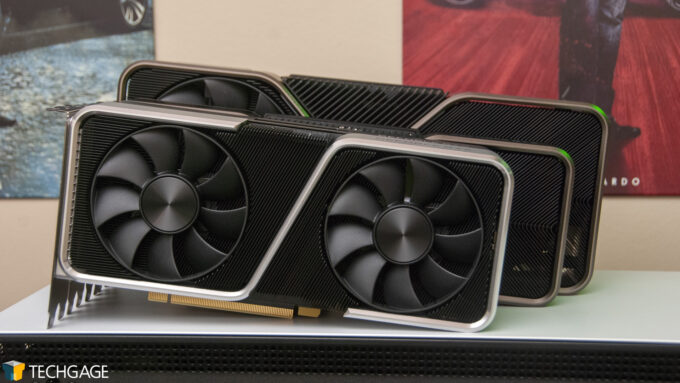 The results in this article should speak for themselves. Even if you owned a 2060 SUPER, you could almost justify splurging on the latest card, because you will see a great performance uplift. It’s not often that the same price point one generation after another offers a notable boost like we’ve seen here. In many cases, the RTX 3060 Ti doesn’t exactly sit far behind the RTX 3070, either, only further bolstering its value.

What’s interesting is that AMD doesn’t seem to have an immediate answer to the 3060 Ti. Overall, the RTX 3060 Ti easily leaps past AMD’s last-gen RX 5700 XT, and so far, all of the RDNA2-based GPUs have focused on the top-end of the stack. Given the time of year, it seems unlikely that AMD will try to squeeze another lower-end card in, but we wouldn’t be surprised to see a launch of some sort in January.