Don’t miss our creator look at the GeForce RTX 3080/3090, including benchmarks for Octane, Blender, V-Ray, Arnold, KeyShot, and Redshift.

We kicked off our GeForce RTX 3080 launch coverage with a look at ProViz performance (linked above), as the gains seen there wowed us to the point that we just had to start there. If you care at all about the creator angle, we encourage you to check out that article, but you’ve found the right place if you want to see what this new Ampere-based GPU is capable of on the gaming side.

To recap: NVIDIA’s new RTX 3080 is the first GeForce built around its Ampere architecture, and it’s the first of three models announced so far. This 10GB 3080 is priced at $699, while an RTX 3090 due soon will come equipped with even more performance, along with a 24GB frame buffer, for $1,499.

In mid-October, NVIDIA will release the GeForce RTX 3070, an 8GB option priced at $499 that is said to easily exceed the performance of the last-gen 2080 Ti – even though price-wise, it should be compared to the 2070 SUPER. 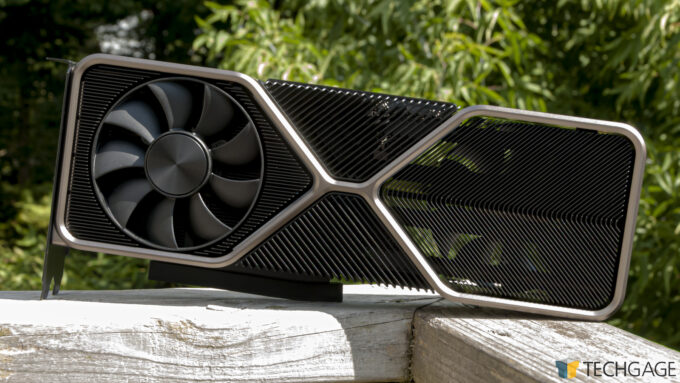 The Founders Edition of the RTX 3080 can be seen above. The PCB under the cooler is modest in size, especially compared to previous generations, so the bulk of the card’s design aides in efficient cooling – which is why you can see directly through the right fan area. With this many fins, NVIDIA wants to make sure noise levels are kept modest even if the going gets tough. We can say from experience that you won’t want to touch the card immediately after finishing a gaming session, however.

The FE version of this card includes a new 12-pin power connector, which can be made use of with the help of a dual 8-pin to single 12-pin adapter provided in the box. It’s expected that power supply vendors are going to begin including these adapters in their boxes, if not native cabling. That said – for it to become standard like that, we’d really hope to see industry support for it grow. Most of the launch RTX 3080s from vendors do not include these new connectors.

Since the RTX 3080 is pretty well-known about now, we’ll expedite this intro a bit, and get right into testing. If you want to learn more first about GeForce Ampere, you can check out our announcement article. Otherwise, you can look through our testing methodology preamble, and then jump right into the results.

All of the GPUs have been tested with current (as of the time the round of testing began) drivers, and with an up-to-date Windows 10 (2004). Our operating system is kept clean and optimized to reduce benchmark interference, ensuring accurate results. V-Sync, G-SYNC, and FreeSync are disabled at the monitor and driver level. Both Intel’s chipset driver and Management Engine (ME) are updated to the latest versions.

This article includes six regular game titles for testing, along with four more specific to ray tracing, two more specific to high-performance eSports, and also a bunch of synthetics with the help of 3DMark and Superposition. Since our last NVIDIA gaming GPU review, we’ve improved our 3DMark testing to include testing for ray tracing, DLSS, and VRS. 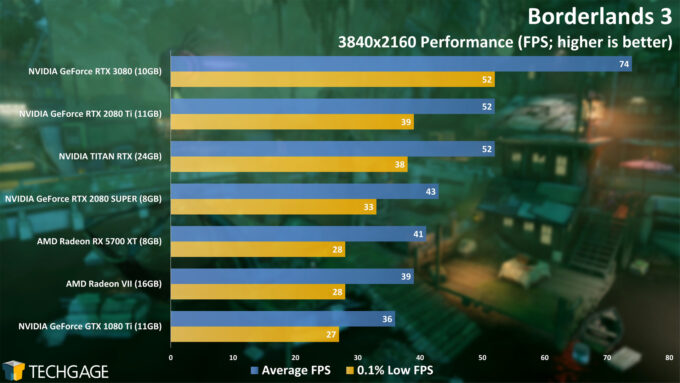 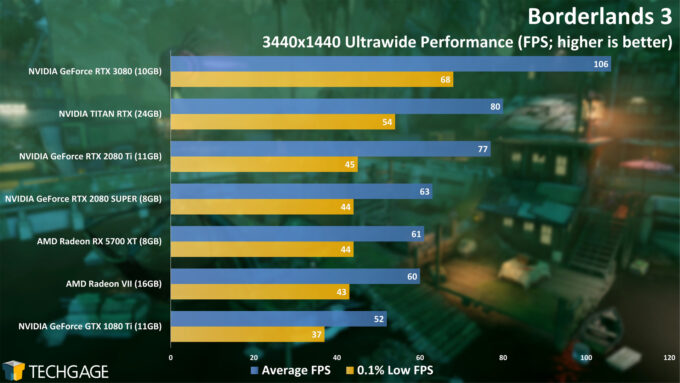 We’re off to an impressive start, at least with regards to how well the RTX 3080 performs against the competition. It’s been a while since we benchmarked Borderlands 3, so we were rather surprised to see that it takes the RTX 3080 to breach 60 FPS at 4K, using the High graphics preset. There are two more presets above that one, so this game might be pushing GPU hardware for a while yet. 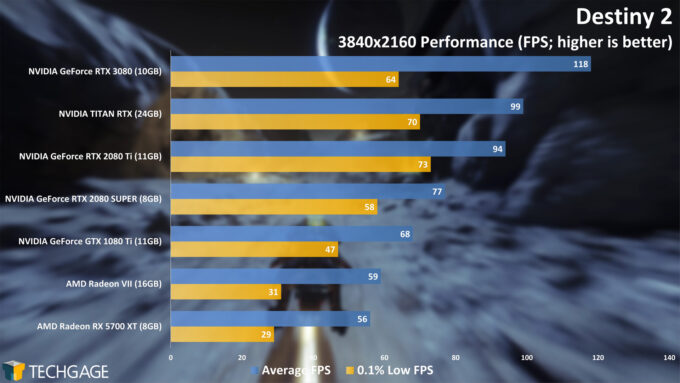 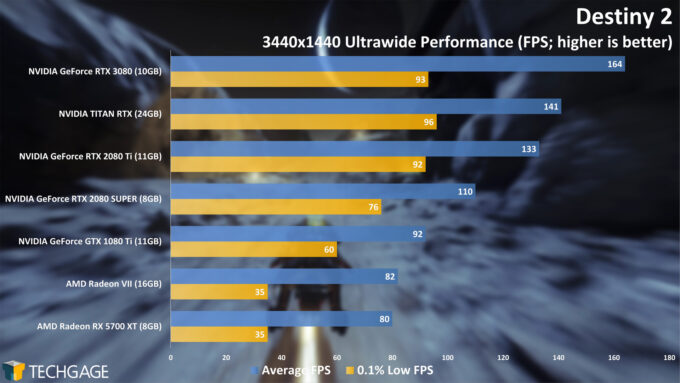 Destiny 2 gives us much better frame rates than Borderlands 3 did, despite us using the top graphics profile. At 4K, 100 FPS is broken through pretty easily, although the gain over the TITAN RTX isn’t quite as impressive as it was with Borderlands. For ultrawide, the RTX 3080 could power this game past 144Hz.

It’s easy to compare the RTX 3080 against the TITAN RTX when that’s the GPU glued to second place, but the better comparison is the 2080 SUPER, since it’s been priced at the same $699 USD up until this launch. At 4K, the 3080 made a 53% improvement to the frame rate over the 2080S. Those are the kinds of generational gains we like to see. 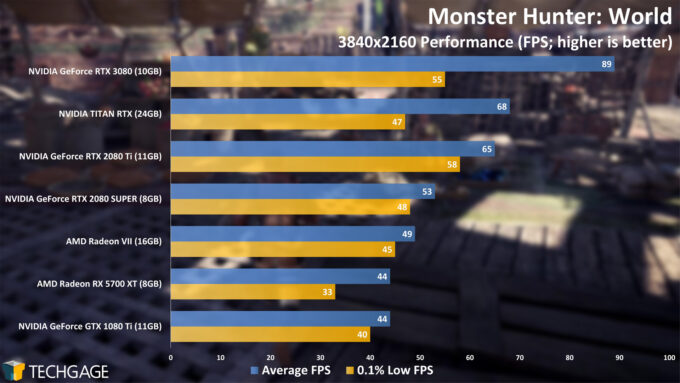 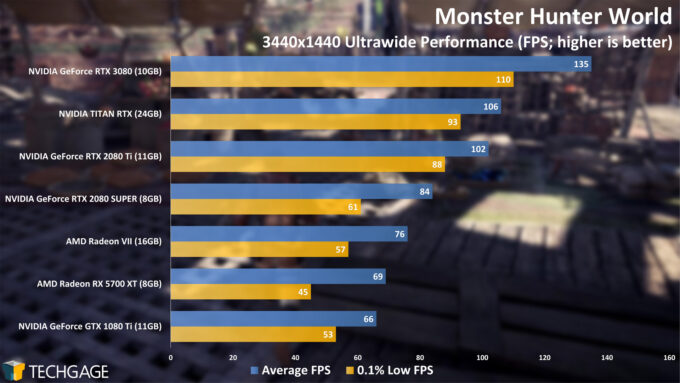 The TITAN RTX continues to get smacked around in Monster Hunter: World by the RTX 3080, with a healthy 31% gain for the new card. Again, the TITAN RTX is a bit of an unfair target, so against the equally-priced 2080 SUPER, the RTX 3080 delivers 68% more FPS. It’s really hard to get over gains like that, and we can say while GeForce Turing was respectable in its own right, it didn’t excite us like this RTX 3080 is proving to. 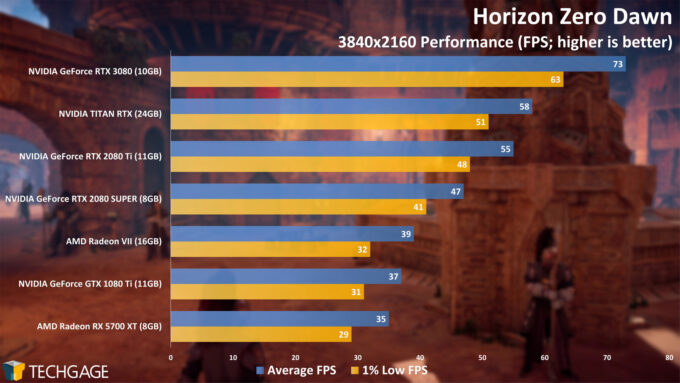 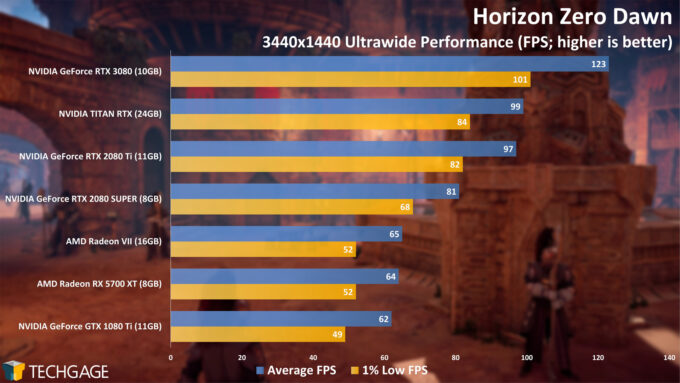 Horizon is the first new game in our test suite, and it also happens to be one on our “must play” list, because the game looks really captivating. It also proves to be a great performance test. At 4K, the RTX 3080 peaks at 73 FPS, although it’s important to note that we’re running the game at top detail levels, and there’s plenty of options to tweak if you’re looking to breach 100 FPS.

Or, if you’re an ultrawide user, you can enjoy 100+ FPS out-of-the-box with the RTX 3080, simply using that top graphics profile. 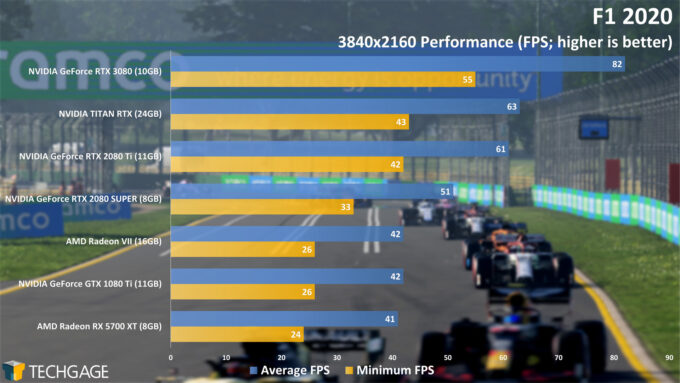 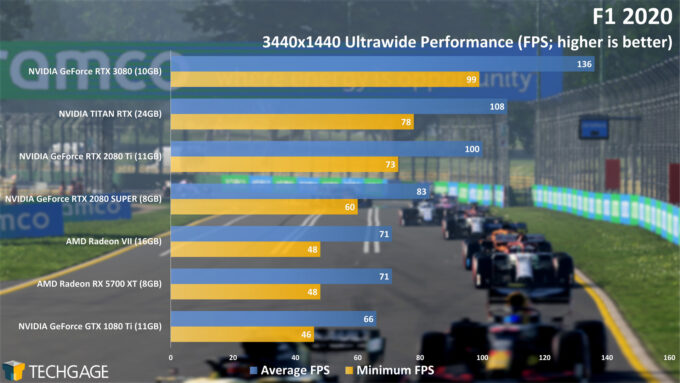 Just as it’s obvious that Lewis Hamilton is going to win the next Formula 1 race, it’s also obvious that the other GPUs in this lineup had no chance against the RTX 3080. We’re yet again seeing a 30% improvement at 4K, compared against the TITAN RTX, which is bumped to 61% when we compare against the 2080 SUPER.

Games like these are meant to be enjoyed with fast frame rates, and with fewer pixels to render than 4K, the ultrawide resolution easily surpasses 100 FPS here, even hitting that on the minimum (okay… 99 FPS). 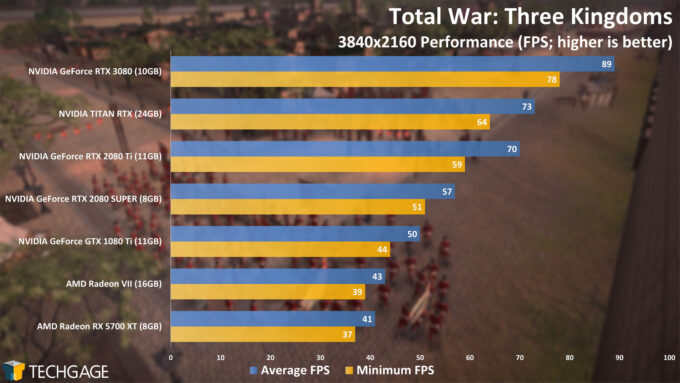 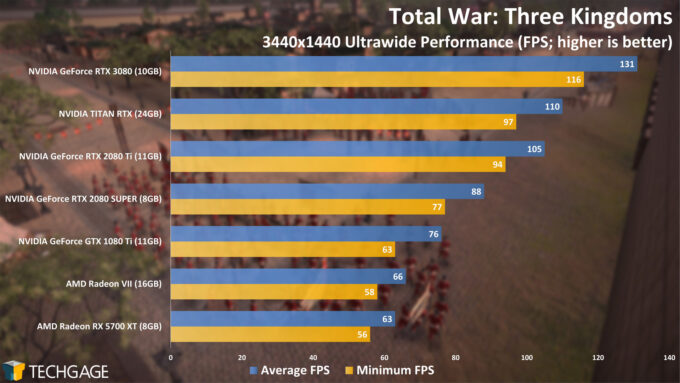 The Total War series doesn’t seem to release a title that doesn’t have the capacity of making any GPU cry. The great thing is that the game has a ton of graphics options to tweak until you can reach your desired frame rate. We had to move anti-aliasing to FXAA, shadow detail to Medium, and disable screen-space shadows in order to deliver realistic playable frame rates on the bottom cards in this lineup.

With the tweaks made to the graphics settings, the RTX 3080 hits 80 FPS at 4K, and hovers around 55 FPS at minimum. Compared to the RTX 2080 SUPER, the new 3080 improves 4K performance by 61%, while ultrawide users could expect to see these high detail levels at over 100 FPS. 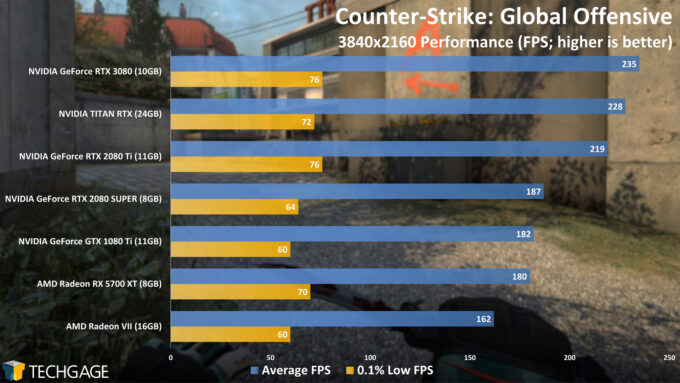 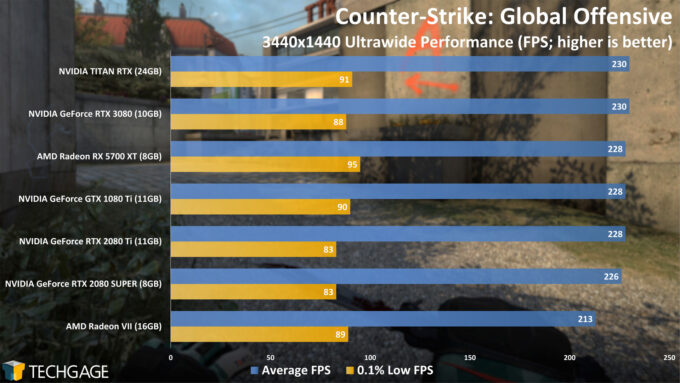 CS: GO is a bit of an odd duck to benchmark for a review like this, but the fact of the matter is, it remains one of the de facto most popular eSports titles going. It also requires a fast CPU to see good scaling on a GPU, which leads us to believe the Source engine could be further optimized to increase the frame rates. After all, Siege, as we’ll see next, has no problems breaching 300 FPS, and will still scale at 1080p.

Nonetheless, at ultrawide, the CPU bottleneck (we used an Intel Core i9-10900K) seems to glue our frame rate to around 230 FPS, while 4K actually does give us some scaling, albeit the least impressive scaling we’ve seen thus far. 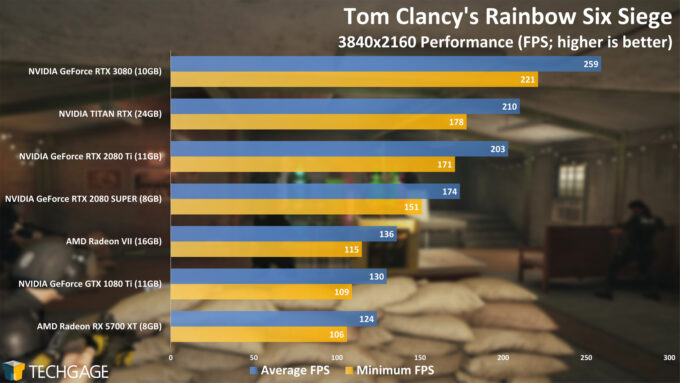 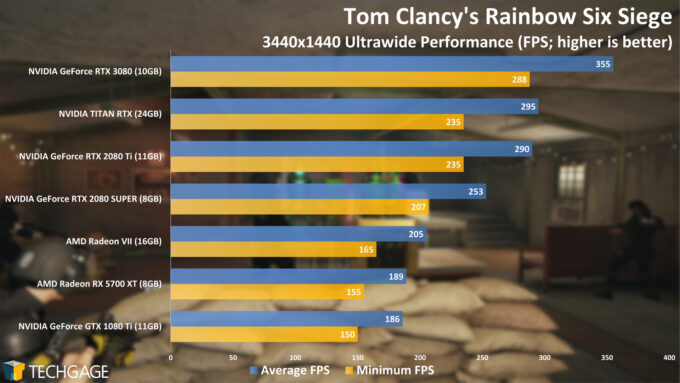 Siege doesn’t suffer a CPU bottleneck like CS: GO does, so it’s been able to deliver some really nice scaling results here, even at ultrawide. At 4K, the 3080 delivered 49% more FPS than 2080 SUPER, while ultrawide proved 40% better. These frame rates explain why NVIDIA is using this title in its marketing push for 360Hz displays.

With those eight titles covered, we’re going to move into a look at RTX-specific titles on the next page.