After spending a lot of time in beta, NVIDIA has just released the first public version of its Quadro Experience desktop software. As with GeForce Experience, users will have access to robust recording and streaming features, automated per-application optimizations, and access to NVIDIA’s gaming features, like Ansel and Freestyle.

We first wrote about NVIDIA’s Quadro Experience last July, so to say that the final release has taken some time to get here would be a bit of an understatement. From the time of its first announcement, it became clear to us that NVIDIA wanted to make supremely sure that this was ready for prime time business use. Now that it’s arrived, we can safely assume NVIDIA is happy with where it is.

We’ve actually been using Quadro Experience since that original news post, and having had so much experience with GeForce Experience before it, it’s felt little different. As with GFE, Quadro Experience will allow users to automatically optimize their installed applications and games, enjoy gaming features like Ansel and Freestyle, and take advantage of one of the best features: ShadowPlay, for desktop/game recording. 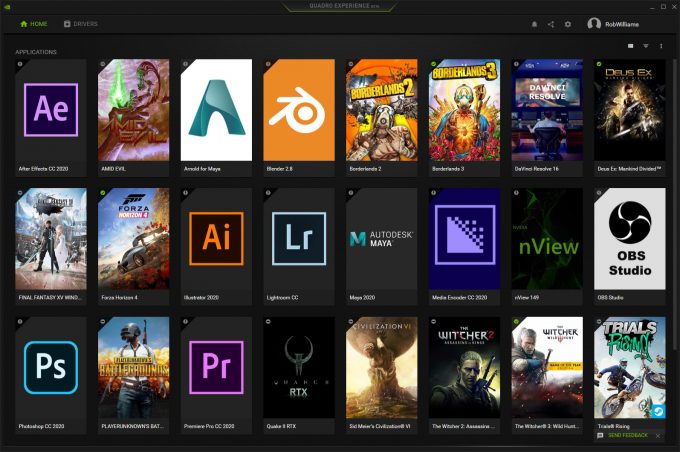 We’ve come to rely on either Quadro or GeForce Experience quite a bit over time, so we’d suggest anyone wanting at least dead-simple desktop recording capabilities to give it an install. At this point, we’re not sure if NVIDIA is planning to roll Quadro Experience into its drivers, so for now, you’ll need to grab the download at a dedicated page.

The thing to note about Quadro Experience is that a lot of its functionality will require a login, as well as some manual toggling. By default, the recording software isn’t automatically set up, so you’ll likely want to take a look at that first. But, before we start tackling everything at once, let’s take a quick tour to help you become more familiar with Quadro Experience.

By default, Quadro Experience won’t reveal any game titles in its list. That’s clearly to do with the fact that Quadros are meant for business, and the majority of those using such a platform are not likely to be gaming on the same machine. That said, when you are equipped with a more powerful Quadro, such as RTX 4000 and higher, gaming will see great performance in addition to ProViz software. 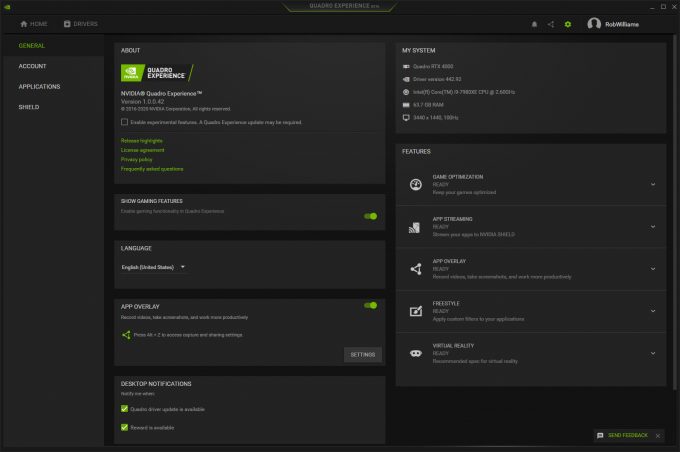 You probably won’t be able to expect Quadro Experience to detect every application you have installed, though as with GFE, its supported list will grow stronger over time. While we once had 3ds Max show up in one of our betas, the latest 2021 version doesn’t. In our case, other software that has gone undetected includes Agisoft Metashape, Luxion KeyShot, Maxon Cinema 4D, Capture One, MAGIX Vegas Pro, Adobe Dimension, and CapturingReality RealityCapture.

It’s important to note that if an application doesn’t show up in this list, it doesn’t mean that it’s going truly undetected, or that it’s not optimized. You can see a more specific application list in the NVIDIA Control Panel (below) that will show which applications the Quadro driver is running special profiles for. 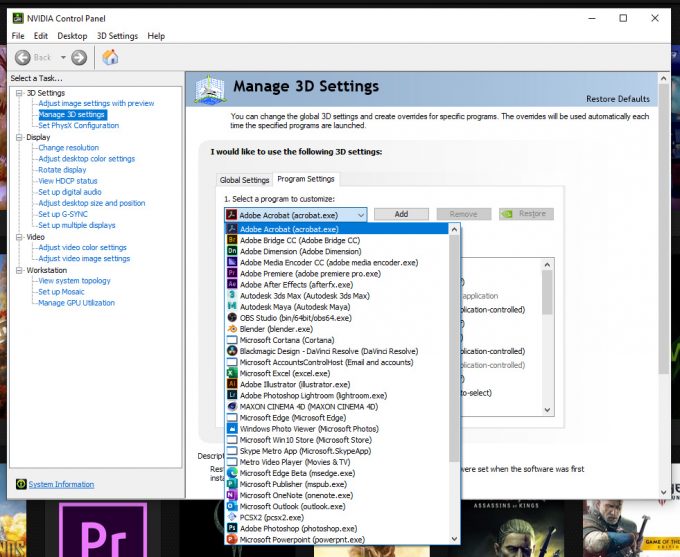 To take advantage of all of the recording and streaming features of Quadro Experience, the respective option must be enabled in the settings, which can be summoned with Alt + Z. If you’re a user of an application that you use the Alt + Z shortcut in, you’ll probably want to save future hassle and change it to something else. We personally change ours to Ctrl + Shift + G to bring up the overlay, but retain most of the other shortcuts.

After triggering the overlay, you’ll be able to explore everything related to desktop capture. That also includes taking simple screenshots, which some might find to be preferable to running a standalone application like ShareX. Before doing anything, anyone using Quadro Experience (or GFE, for that matter) for the first time should hit up the settings screen and spend time tweaking.

The first place we’d suggest checking out “Keyboard shortcuts” so that you can set some hotkeys up that you’ll actually remember – unless you’ll have no problem remembering the defaults (and assuming they don’t overwrite other functions in your used applications). The “Video capture” screen is another important one, as it will allow you to configure bitrates and resolutions for your recordings.

Because the default is to capture content to the C:\ drive, you may wish to configure different paths in the “Recordings” option screen. There, you can choose a custom path for both temporary and final recording, and while we wouldn’t expect huge wear and tear from regular recording, we’d suggest changing the paths to a hard drive if you plan on recording 24/7 using the auto-replay feature, since a hard drive will suffer less wear, and is more than fast enough for the purpose. 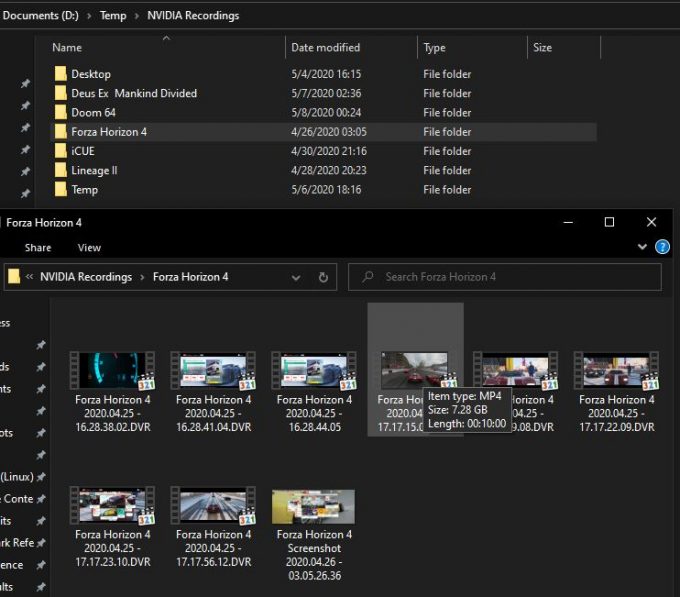 The fact that you can record and stream from Quadro Experience should be emphasized, even though it seems so standard fare at this point. NVIDIA’s ShadowPlay is used for capturing, and for as long as we’ve been using the technology, it’s been hugely efficient – more so than OBS Studio in our testing. With hotkeys set up, you could instantly begin streaming to either an audience, or a single person, via many different network options.

Since ShadowPlay doesn’t use too many resources, it running in the background isn’t going to impact performance much at all in 3D applications. Again, in our testing, we’ve found OBS Studio to hog more resources, even while idle, so you don’t need to fret over the performance aspect here. As Ronco famously said, you can “set it, and forget it”. And then continue to make great use of it as you need it.

Quadro Experience might be packed with some cool functionality, but one feature NVIDIA would like you to use the software most for is for monitoring drivers. As soon as a new stable driver hits the web, Quadro Experience will notify you, and let you update easily from within the same interface. 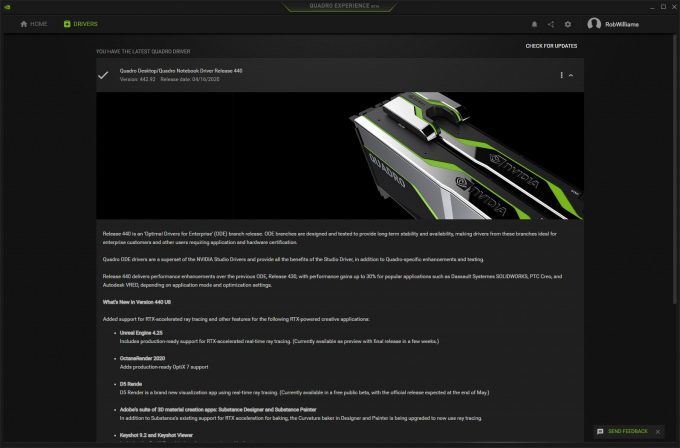 While GeForce Experience allows users to toggle between a focus on Game Ready or Studio drivers, Quadro Experience keeps exclusive to Quadro. If you don’t want to be reminded about driver updates, you can simply disable the option in the application settings. It’s right above an option to be notified about random rewards, although we’re quite sure those will go to email as well, based on GeForce Experience use. 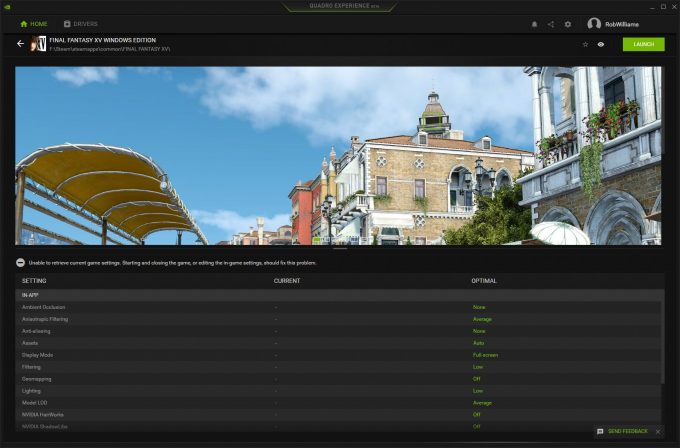 One thing that might be important to highlight is the fact that Quadro Experience isn’t used to optimize individual applications like it will be for games. You can see an example of that above, with Final Fantasy XV. As with GFE, you will be able to adjust the intensity of the optimization (favoring IQ or FPS), but since creative software doesn’t need the same kind of tweaking, the driver itself handles that optimization. That means Quadro Experience listing the software is only to have it be launchable from within its interface. There is no further customization beyond what the driver itself tackles.

Overall, Quadro Experience is well-worth downloading, but that’s something we could have said last summer when the first private beta dropped. We’re not entirely sure why it took almost an entire year to finally arrive, but now that it’s here, you should go and grab it. You can also refer to NVIDIA’s official blog post on the release.