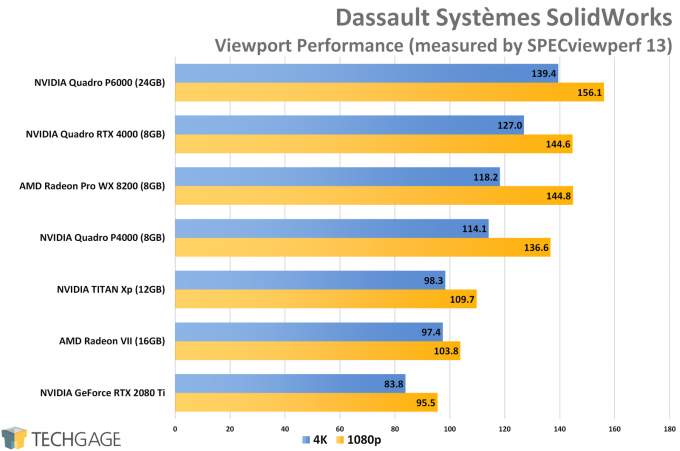 We’ve come to the part of the review where we’ll encounter some hard-to-predict results. With gaming, a stack of cards will scale pretty much the same from title to title, with the odd exception where some heavy optimization for one vendor is employed. Gamers don’t really need to worry that much about which vendor supports the latest AAA title better than the other, but design is a whole different ball game.

In the SPECviewperf take on SolidWorks seen above, the RTX 4000 slots in just behind the Quadro P6000, and just ahead of the Radeon Pro WX 8200. Huge gains were seen earlier in the review for the RTX 4000 versus the older P4000, but both cards are close here. If it’s a pro card, it’s going to run well. 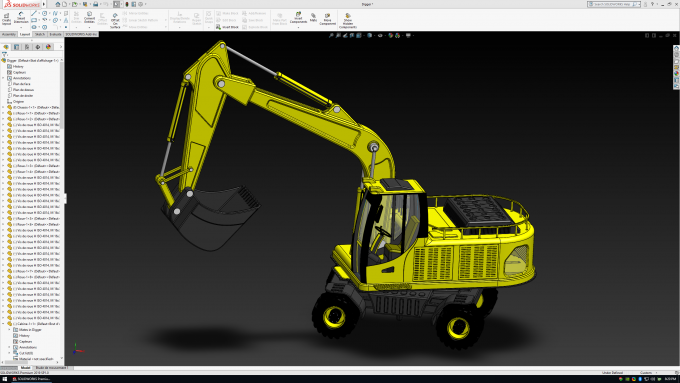 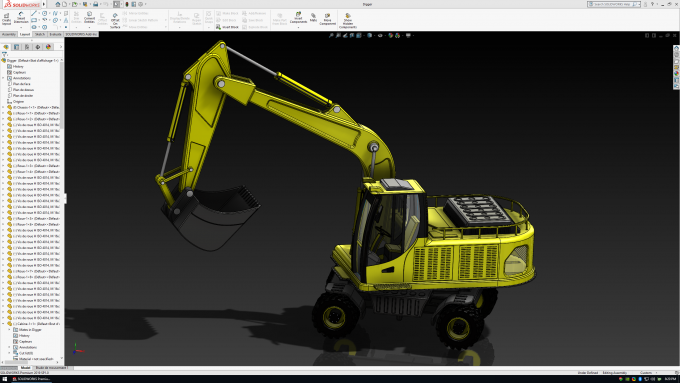 In February, we were hooked up with a SolidWorks license so that we could dig into some real benchmarking. Ultimately, we wanted to see how real-world results scaled with SPECviewperf, and quite honestly, we didn’t expect as much of a divide between vendors as we did: 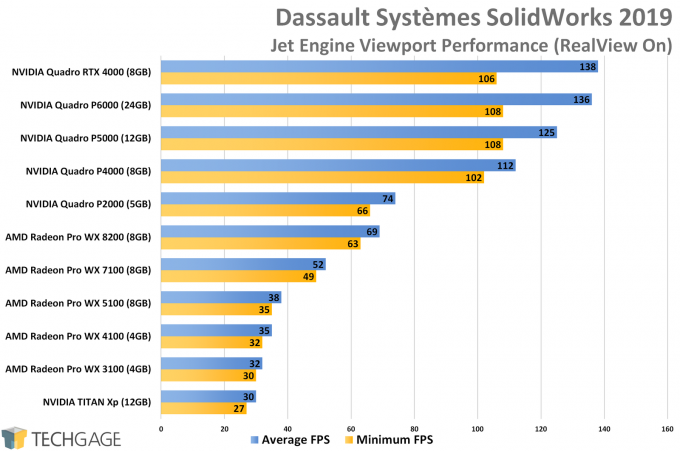 This first chart takes a look at SolidWorks with its RealView feature on. During production, users can use RealView improve the appearance of the model in the viewport. That’s thanks to improved shadows and reflections (examples seen above). Because our SolidWorks license was time-limited, we couldn’t dig in deeper and figure out what caused Radeon cards to lag behind NVIDIA’s so much, but the difference is striking.

It’d be a little misleading to say that Radeon performs poorly here, because the WX 8200 still pushes 69 FPS on average. That said, even the lowbie Quadro P2000 outperforms that card, so NVIDIA has an obvious advantage here. 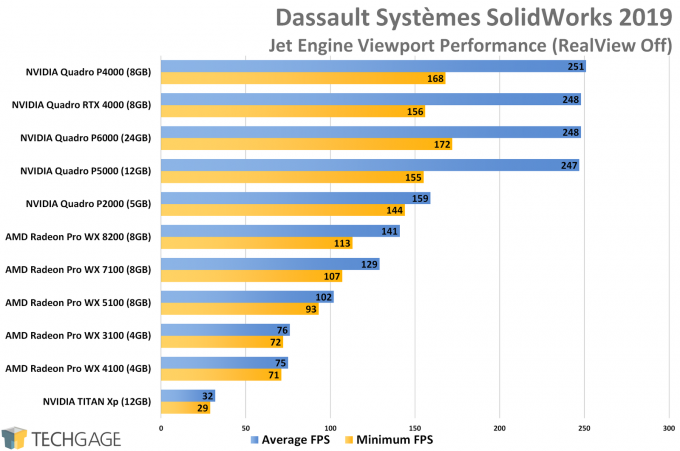 The same performance scaling is seen with RealView Off, but at that point, the performance is suitable even on the smallest Radeons. Interestingly, the TITAN Xp, which NVIDIA granted some workstation perks to, does not run well in SolidWorks at all. However, the TITAN Xp can at least run RealView, whereas gaming cards cannot.

If the opportunity arises to test SolidWorks more in the future, we’ll dig much deeper into performance. 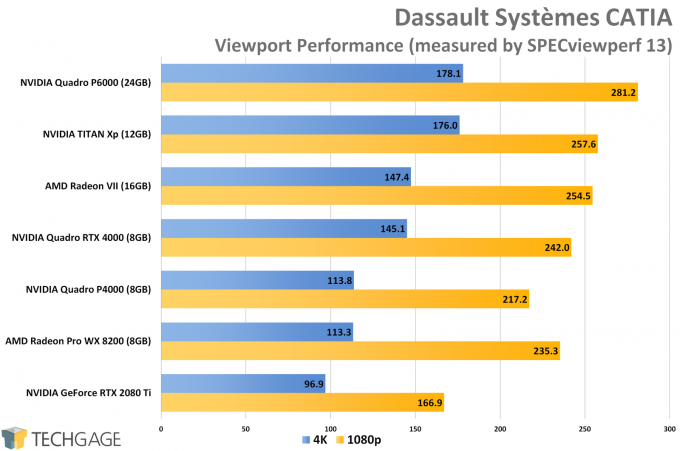 CATIA isn’t as concerned with workstation GPU-specific optimizations, so the faster the GPU under-the-hood, the better the performance is going to be. CATIA is of course one of those applications that pretty much implies that you should be using a professional-level card anyway, to ensure the best possible stability, but students are not going to be held back with performance if stuck with a gaming GPU. 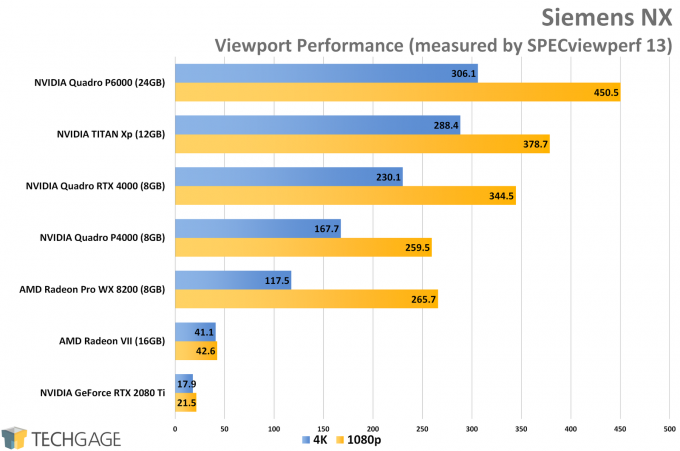 Siemens NX is arguably the most interesting test on this page, because it treats gaming GPUs like a bunch of worthless punks. Even NVIDIA’s fastest gaming GPU can’t breathe here. AMD’s Radeon VII for some reason outperforms it by a wide margin, but it still falls completely flat in comparison to the pro cards.

With the pro cards, all of the GPUs perform admirably, with NVIDIA’s RTX 4000 showing huge gains over the last-gen P4000 – just what we like to see. 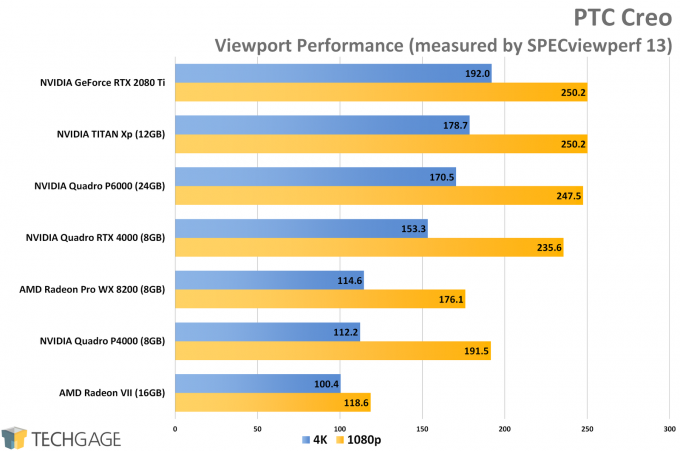 Creo is another application that’s optimized very well for ProViz GPUs, which helps a card like the WX 8200 outperform the technically faster Radeon VII. On the green side, the RTX 4000 sits just behind the P6000, and really, not that far behind. At the same time, the newer card again reveals a big performance delta between it and the older model it replaces. 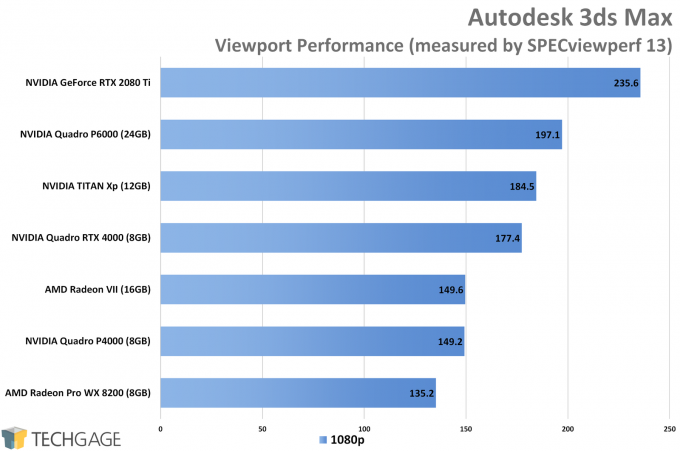 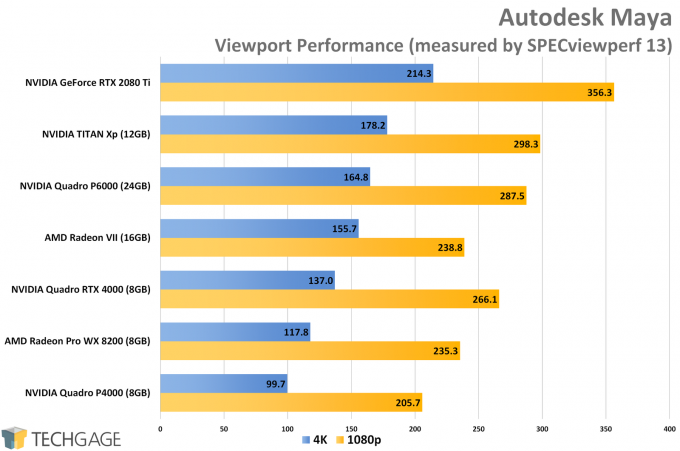 Both AMD and NVIDIA treat 3ds Max and Maya as very important design suites, but fortunately, neither company holds back performance on their gaming GPUs. On the pro-GPUs, some functions and stability will be improved, but overall, both are pretty neutral for GPU comparisons.

For even complex scenes, any one of these GPUs is going to deliver ample performance, but where the bigger cards will prove beneficial is with certain viewport rendering modes. Wireframe and solid shading might not be too demanding, but if you want to use interactive rendering, the faster the GPU, the reduced strain on your sanity. 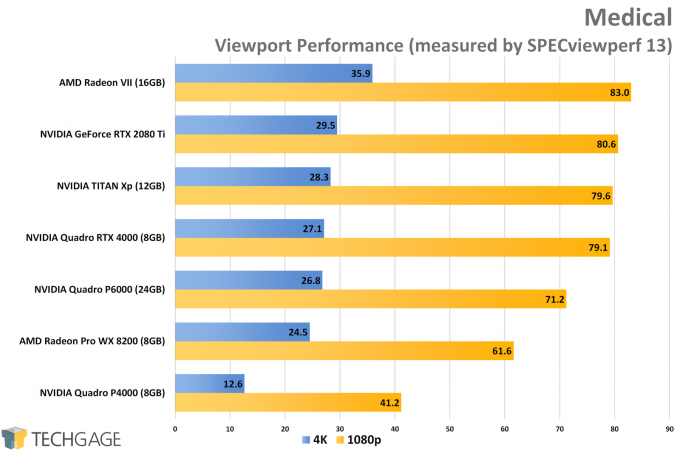 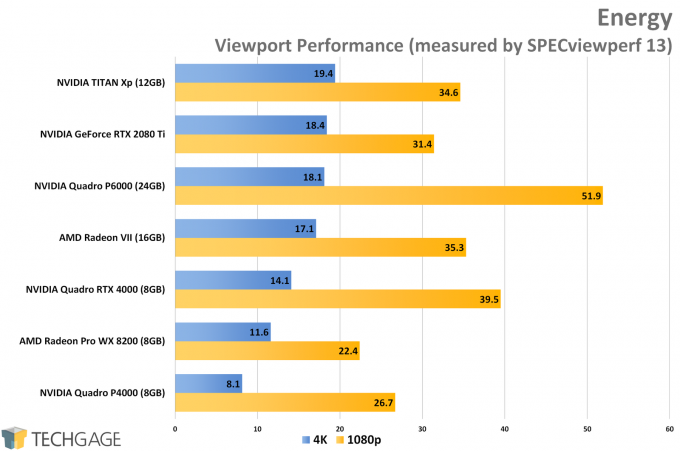 The boost seen in the energy test on the RTX 4000 warrants a look here, since it highlights some of the architecture enhancements NVIDIA crammed into Turing. The performance boosts are not enough to topple the Radeon VII with the Medical test, beating out even the 2080 Ti. That card’s super-fast 1TB/s memory might be helping out with things there.