A couple of weeks ago, NVIDIA unveiled what could be the final graphics card model to help complete it’s mainstream to high-end GeForce 400 line-up, the GeForce GTS 450 (GF106). At ~$130, it becomes a direct competitor to AMD’s Radeon HD 5750 – a card that came out last November. It took NVIDIA a while to get to this point, but we can hope that with Fermi’s strong points, the company’s latest offering will shake things up.

Currently, the GTS 450 is NVIDIA’s lowest-end Fermi offering that’s actually available to consumers, but in early September, the company quietly released its GT 420 budget card, one best suited for HTPCs or as an IGP replacement. Unfortunately, this model is only available to OEMs right now, so for those hoping for a budget GF100 solution, you’ll have to wait longer.

With the GTS 450 priced at around ~$130, it stands to be a good offering for those who don’t want to spend much on a graphics card, but don’t exactly want to forego pretty graphics or a decent resolution. As we’ve seen with our previous HD 5750 testing, these affordable cards offer a pretty surprising bang for the buck, and with resolutions of 1080p or lower, should prove suitable for a lot of people.

When we were briefed on the GTS 450 by NVIDIA prior to its launch, the fact that value-oriented gamers still want a decent gaming experience was reiterated to us more than once. Of course, given the price-point we’re dealing with, we wouldn’t have assumed otherwise. But, to be clear about this card’s intentions, it’s best suited for those with modest resolutions, such as 1680×1050 – and for most gamers looking for a card like this, that’s likely the resolution they’ll be running anyway.

The GTS 450, not counting the pushed aside GT 420, becomes the fifth release under NVIDIA’s Fermi-based line-up. Compared to all the other cards, its Core clock is much higher, at 783MHz, but it of course lacks in the overall number of cores. And though it also uses GDDR5 like the others, its bus has been tightened to 128-bit, on par with other value-driven cards, including the HD 5750.

There’s not too much to say that hasn’t been already, so enough of these paper specs and onto a look at the actual card. As you can see, the cooler isn’t Ã¼ber-impressive to look at, but in my opinion, it does look a bit better than the reference coolers that AMD has used on its HD 5000 series of cards. The most important thing is that the cooler here is rather effective, though I find it a bit strange that the fan hovers just slightly above its chassis. 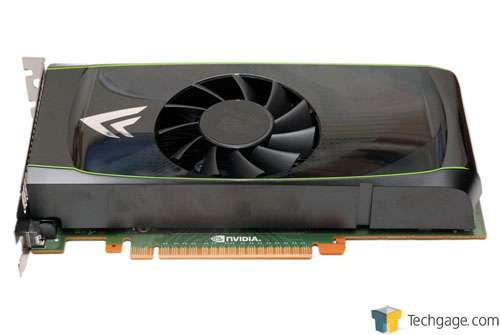 Like most of the other models in the GF100 series, this one includes two dual-link DVI ports and also a mini-HDMI. Multiple monitor support is possible with these cards, although if the goal is gaming across three monitors, then two cards will be required. 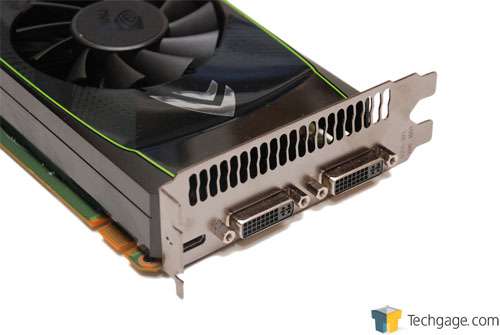 To complement our testing, ASUS sent along its ENGTS450 DirectCU TOP model, which improves upon the reference design in a couple of ways. First, the cooler is clearly more efficient, which is easy enough to tell simply by looking at it. Like many after-market GPU coolers available, this one focuses on allowing as much room for airflow as possible, and with its finned design, heat is sure to dissipate quickly and efficiently. 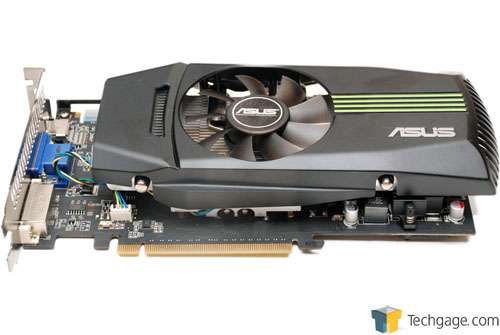 ASUS claims that with this cooler, the card will run about 20°C cooler and also be about 35% quieter. We’ll see if these claims are accurate with our testing. To get a better idea of the cooler, here’s a view that will fill in the blanks: 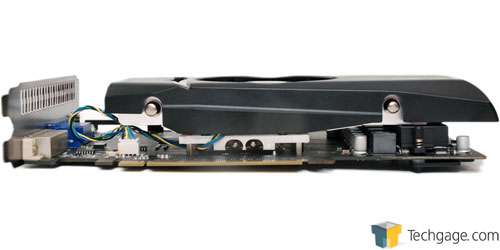 In addition to the special cooler, we received the TOP version of the card which means that it’s pre-overclocked, and is it ever! While the stock GTS 450 uses a stock Core clock of 783MHz, this model cranks that up an impressive 18% to 925MHz. Likewise, the memory has been bumped to 4,000MHz from 3,608MHz, and the shaders from 1566MHz to 1850MHz.

It should be mentioned that ASUS employs a couple of features to its DirectCU TOP card that the company hopes will set it apart from the rest. One such feature is the addition of POSCAP capacitors for increased power efficiency and for improved overclocking, and also an interesting “PCB stiffener”, which doesn’t affect performance of cooling, but adds durability.

With all that said, let’s quickly tackle our testing methodologies and then get right into our testing!