It might have taken NVIDIA a while to catch up to AMD in terms of a completed GPU line-up, but with the GTS 450, it’s happened, and fans of the green side will be pleased with the $130 performance seen here. NVIDIA’s card didn’t out-perform the HD 5750 in most tests, which is something we expected, but both cards in the real-world appear to be the same.

NVIDIA’s latest card flip-flops some pros and cons with AMD’s HD 5750. First, the power consumption is a bit higher on the GTS 450, but its temperatures are improved – even with the reference cooler. The performance on both cards could almost be called the same, although AMD’s card did come out ahead most of the time.

Where the GTS 450 shines is with DirectX 11 games, especially those where tessellation is involved. As we saw in our Unigine tests, all of NVIDIA’s offerings dominate AMD’s, and it’s clear that the company’s goals with Fermi are being realized. That’s the upside. The downside is that tessellation and DX11 in particular aren’t exactly proving to be all-important features right now.

The reason for that isn’t just the lack of games, but the lack of good use of these features. There are games like Metro 2033 that implement some nifty graphical effects, but as the game runs about as fast as frozen tar running down an arctic hill when in DirectX 11 mode, those might as well not exist. Then there are other games such as Dirt 2, which use DirectX 11 in minimal ways.

None of this is of course NVIDIA’s fault, but up to this point I haven’t seen a compelling reason to care about DirectX 11 – but, that could soon change. DirectX 11 titles began coming out a year ago, and in the next year, we should be seeing many more. I am hoping that it’s with these upcoming titles that DX11 will begin to look more attractive. 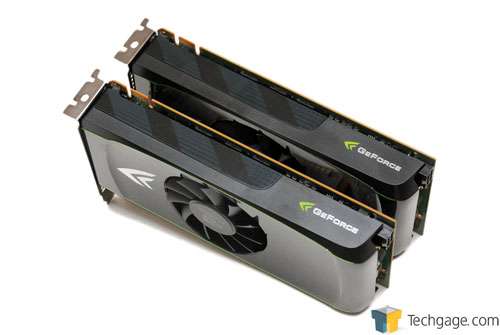 There are two rather major pluses that the GTS 450 has. The price is one of them, at $130 or thereabouts. There are a ton of models currently available on the market, from many different vendors, so finding the best model for you shouldn’t be too difficult. In particular, I quite liked the ASUS DirectCU TOP version I also tested, as it gave a nice boost to the performance and remained stable throughout all of our testing.

What impressed me most about the GTS 450 was its SLI scalability though. Simply put… it’s incredible. In some of our tests, that configuration pushed the performance up towards the HD 5870, and in the case of StarCraft II, past it. If the prices scaled the same, the performance gains wouldn’t be too impressive, but as the HD 5870 costs about $140 more than two GTS 450’s in SLI, that seems like quite the value.

To drill the point home… in most of our tests, the GTS 450 in SLI even performed better than a stand-alone GTX 470 – a card that currently costs $350, or $90 more than the aforementioned configuration. If I were a gamer today looking for a huge bang for the buck, and didn’t mind having two GPUs hogging up the inside of my chassis, I’d be jumping all over this.