Though we run seven games in our current GPU-testing gauntlet, some are becoming a bit more aged than others. Therefore, it’s a little difficult to make sure that we’re testing the higher-end cards as best we can. So to make sure we’re being fair to both ATI and NVIDIA, I chose five current PC games to pit each card through. For good measure, we’ve also tossed in some Unigine Heaven goodness, to test each card under a heavy tessellation workload.

Unlike the rest of our game fleet, I’m not going to exhaust the detail settings I used for each title, but I’ll give a brief description. For each title, I tested at both 1680×1050 and 2560×1600, and if it was possible, I maxed out the game’s detail and tested with that. Fortunately, some of today’s games are too hardcore at maxed settings (it means we have room to breathe in the future), so I had to lower the detail in some regards for the sake of testing.

For AvP, BioShock 2, Dark Void and Just Cause 2, the detail settings were maxed, with 4xAA. Metro 2033 was the main game that had to use lower-than-top-end settings, as its detail is simply incredible. So much so, that I used different settings for each resolution. For 1680, I used a Very High detail setting with 4xAA, and for 2560, I dropped the detail to High and disabled both AA and the two available DirectX 11 features (DOF and Tessellation). Unigine’s benchmark was run with default settings, but with AF increased to 16x.

I apologize for these graphs being a little confusing at first. It was difficult to give all this information without creating four or more separate graphs! Purple and green is most important, as they are the averages. Purple for NVIDIA, and green for ATI (no I didn’t mean to further confuse like this on purpose). 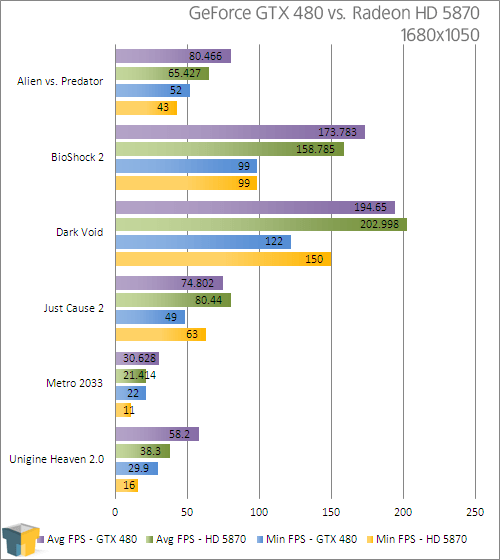 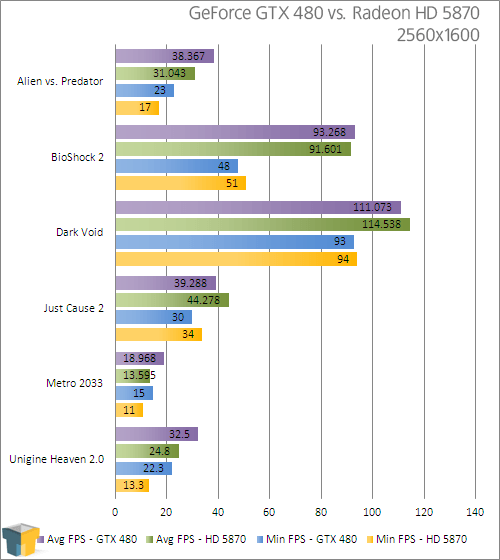 Aside from Dark Void and Just Cause 2, the GTX 480 comes out on top in each test. The largest gain is seen in Alien vs. Predator… a full 25% boost in performance at 2560×1600. This is one of the few games on the market that uses DirectX 11’s tessellation, so I assume that the performance gain is attributed to that (due to being late on this article as is, I didn’t re-test the game without tessellation, but will at a later date).

Speaking of tessellation, this feature is one that NVIDIA has been touting hard since the beginning of the year, and a couple of weeks ago, it shot along a graph that explained the reason why. The company ran a 60-second-long benchmark using Unigine’s Heaven, and showed the stark performance gain that its card held. Naturally, I wanted to do the same exact test in our lab, but rather than do a 60 second run, I allowed the entire benchmark to complete, which totals just over 4 minutes. 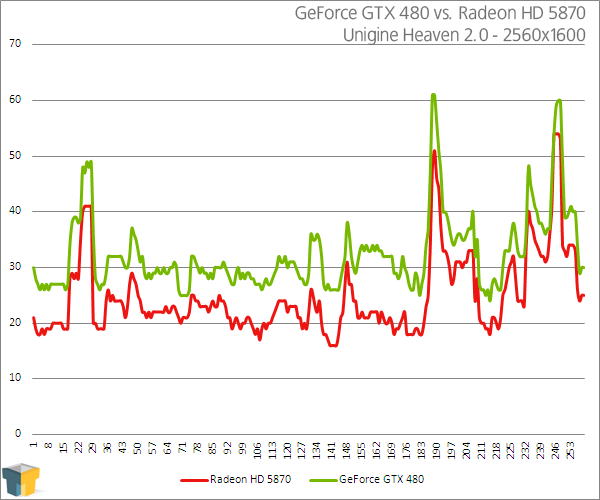 Thanks to the heavy focus NVIDIA put on accelerating tessellation in GF100, it’s not too surprising to see the HD 5870 fall well behind here, but the importance of this benchmark is hard to settle on. Tessellation as it stands isn’t a major force in gaming today, and there’s no real sign to predict whether it will be soon. NVIDIA states that it will be in the year ahead.