Ahh, the ‘final thoughts’ page… the one where I’m supposed to make use of my professionalism to conjure up a definitive answer as to whether or not the product at hand is “meh”, “good”, “great” or “:o!!!”. For NVIDIA’s GeForce GTX 550 Ti, it’s a little hard to conclude on. While the company had focused on beating out AMD’s Radeon HD 5770, it only managed to do that about half of the time.

If both cards in question came out at around the same time, this would be a good thing, but as AMD’s card came out more than a year-and-a-half ago, it’s a little hard to feel too excited about the GeForce GTX 550 Ti.

At the $130 reference price point, NVIDIA’s card is meant to be cheaper than the HD 5770, but in most cases it’s not. At Newegg, there are many stock-clocked HD 5770s for less than $130, and as we saw in our testing, and especially with 3DMark 11, AMD’s card is the faster overall. That’s just a simple fact. When overclocking is brought into the picture, that can change, but at the same time, AMD’s card could also be OC’d just the same. 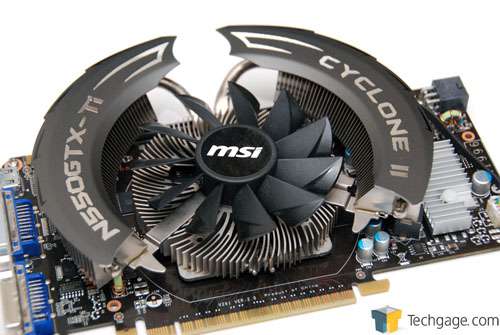 If DX11 is brought into the picture, though, NVIDIA’s card reigns supreme… the difference is nearly +20% for the GTX 550 Ti compared to the HD 5770. That’s quite substantial, and when running games at 1680x or lower that can take advantage of things like tessellation, that’s important. It’s also important to note, though, that DX11 is rather GPU-intensive, so don’t expect to pick up any card at the sub-$200 price-range and expect a superb DX11 experience.

Other benefits that NVIDIA’s card avail include its CUDA performance. For those who like to run [email protected], there’s just no competition… at all. So after a game, you can still make full use of your GPU and make a difference. In addition, there’s also PhysX support, and for that, the card can be used as a slave down the road when you look to upgrade. That’s a benefit AMD unfortunately cannot provide.

As usual when comparing two similar NVIDIA and AMD cards, it all comes down to features here. AMD offers superb multi-display support and improved power consumption, while NVIDIA offers CUDA, PhysX and improved DX11 support. The factors you care about most should make choosing the right graphics card easy.

March 25, 2011 Addendum: The original price I quoted the GeForce GTX 550 Ti as was $130, when in fact it’s $150. The reason behind the mistake is that NVIDIA’s marketing materials listed a $129 price-point, but what we didn’t catch was that the company was talking about the older GeForce GTS 450 which the 550 Ti replaces. We apologize for the error.