After taking a hard look to see what NVIDIA’s GeForce GTX 580 is made of, I can’t help but think that this is what the GTX 480 should have been. From our launch article of that card, I’m sure it was made clear that it wasn’t a product I was too thrilled about, but the truth is, had the GTX 480 been what the GTX 580 is today, I have no doubts that most of my cons would have been non-existent.

For these efforts, NVIDIA should be commended. There were many doubters out there that much could be done with the GF100 chip to reverse some of the downsides, but NVIDIA for the most part fixed a lot that was wrong, and at the same time, made it faster, and downgraded the heat-pipe equipped cooler. Overall, the GTX 580 is exciting from that standpoint.

Another plus is that the GTX 580 helps retain NVIDIA’s position as being the company to offer the highest-performing single GPU out there. The GTX 480 was the previous champ, so the company is on a relative roll here. Whether that will change later this month once AMD releases its HD 6900 series of cards, we’re not sure. That uncertainty just makes this launch all the more interesting. 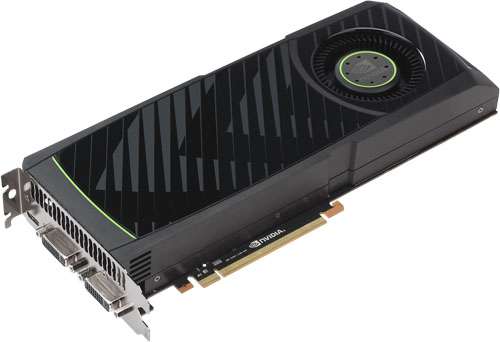 As attractive as the GTX 580 looks in some ways, there’s a rather significant issue… its pricing. At $500, the card isn’t going to appeal to too many people – primarily those who happen to be NVIDIA fans and want its most powerful offering out there, or those who plan to go the dual or triple SLI route and want a reliable solution (as they should for that kind of price).

CrossFireX isn’t perfect, but the performance gains seen in most games are hard to ignore. The HD 6850 x 2 setup didn’t quite outpace NVIDIA’s card, but combined, two of those cards comes out to about $360, much, much less. Or for around the same price, $480, you could equip yourself with HD 6870 x 2 and get even better performance in most cases.

The Radeon HD 5970 dual-GPU card is also worthy of consideration, but to me it’s not the perfect solution either. It’s super-fast, and retails for about the same as the GTX 580, but it’s also long and not as convenient. It also doesn’t feature the robust tessellation performance that the GTX 580 does. Depending on what you’re looking for, though, it might still be a suitable choice for you, and it’s far from being a bad one.

The fact of the matter is, the current available choices are good, and though NVIDIA’s card is priced higher than it needs to be, it’s not a bad choice for those who want a super-powerful single-card solution. If you don’t mind the dual-GPU route, then the HD 6870 x 2 setup is currently a bit more attractive due to the even higher performance and ability to hook up three monitors (you can hook up three monitors with the GTX 580 as well, but it requires two cards).

NVIDIA’s GTX 580 is a difficult card to settle on right now, and the primary reason is that we have no idea what to expect from AMD’s upcoming HD 6900 series of cards. It could be that in mere weeks, AMD could release an even more powerful card than the GTX 580 for the same price, or perhaps a more expensive card that happens to be far more powerful. The most unfortunate thing right now is being a gamer ready to buy, and the uncertainty of it all.

As it is, though, NVIDIA’s GTX 580 is the most powerful single GPU card on the market, and it fixes a lot of niggles that the GTX 480 brought with it. That’s the good. The bad is that other solutions also look very attractive, and AMD’s upcoming cards do nothing but complicate the situation. Despite being priced a little too high (in my opinion), the GTX 580 is a great replacement to the GTX 480.

But for the sake of not making a purchase now and regretting it later, we recommend holding off for a couple of weeks to see what Cayman is capable of. How NVIDIA handles that launch might also be quite interesting.