While the gaming performance on the ION wasn’t earth-shattering, what was exhibited was adequate enough to actually play current games at decent frame rates. As mentioned earlier, I don’t expect these devices to end up on a gamer’s desk anytime soon, but it does give us a great example of what could be possible on future netbooks.

On display for us to play was Call of Duty 4 and Spore. Both games are popular in their own right with CoD4 being far and away my favorite FPS of last year. Using 2GB of DDR3 memory and a SATA II 7200 RPM drive, CoD4 loaded quickly and in no time, Rob instinctively entered the console command to kick off our benchmarking level for this particular game, Bog.

It was interesting to see Rob instinctively run the same route every time, shooting at the same places at the exact same time with each pass. You can tell he does this every day of his life when benching either CPUs or GPUs. Throughout the entire run, he ran FRAPS in the background to capture the results. At the end of the run, he came out with a playable 28 FPS. Again, not earth-shattering by any means, but considering that it is on a tiny pico-ITX machine, the results were impressive. 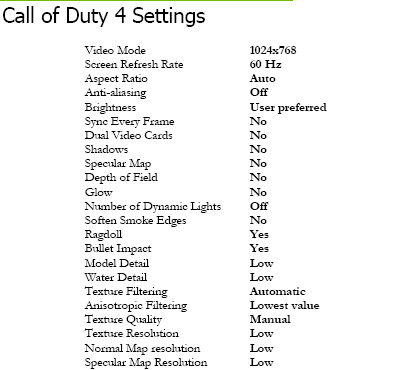 Up next was Spore. We didn’t run a FRAPS capture on this game but with medium to low settings across the board (1024×768), the game ran smoothly and without issue. I’m not a huge fan of the game but like any Will Wright creation, there are PLENTY of those out there that love it and being able to rotate around the 3D environment as smooth as we were was refreshing.

We were also allowed to run through a few rounds of 3DMark ’06. Our results were on par with what NVIDIA was reporting and we ended up with an average score of just over 1500. Not bad for such a small device.

To emphasize the ION as a platform that everyone can use, NVIDIA then let us fire up Adobe Photoshop CS4 to show off the GPU acceleration that the MacBook Pro and Air guys have been enjoying for a while now. We were able to open up a very large photograph and using the zoom function, we could move into and away from the picture relatively smoothly.

Admittedly, it was a choppy experience but it wasn’t unusable, and again, this shows the power of the 9400M. Having used a MacBook Pro on occasion, I do know that the effects could be smoother on notebooks/PCs with discrete graphics cards, but having the ability to run off an integrated GPU in the ION at all is impressive. In addition to the zoom, we could also use the 9400M to aid in the smooth rotation of the image at any angle we desired to set it at.

The use of Photoshop on the ION will not interest many of you. It might not interest ANY of you, but for those on the go, this allows image manipulation on the go in a small, portable and convenient netbook.

We have mentioned the use of ION in netbooks quite a few times throughout this article but this is not the sole focus on NVIDIA. To be perfectly clear, NVIDIA isn’t going to make a product at all, at least for us consumers. What they are doing is providing the technology to OEM builders to do with what they want.

I would love to see notebooks with netbook characteristics, but featuring a large screen. A 13″ notebook using this technology would allow a full-sized keyboard to be used and could be made extremely thin. With the ION being no larger than it is, a manufacturer could take that design and use the rest of the open space in the notebook’s chassis to route cooling.

With that much area to dissipate heat, we could see a super thin notebook with a CD drive for a reasonable price. Car audio is another place that this could be implemented. Interactive touch screen navigation could really benefit from the power that the ION holds.

In all honesty, the ION could be used in countless applications. Tiny HTPCs, netbooks, notebooks, nettops, the before mentioned car navigation units… the list goes on and on. 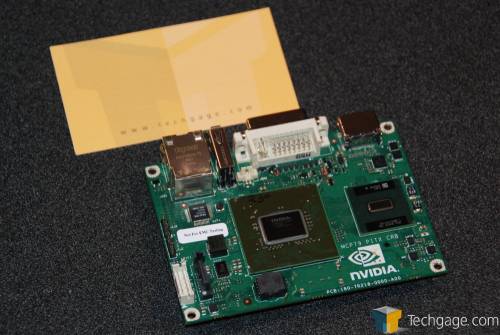 One thing that we were unable to test was battery life of devices using the ION platform. The only box there was a wired unit so as of now, we cannot report on the power advantages of using an ION-based product. While we won’t be seeing any products based on the ION really soon, we have seen where it’s headed and if it can live up to its potential, then the sky’s the limit.

A lot of that is out of NVIDIA’s hands, however. Much of it depends on their partners and where they choose to take it. We left our meeting with NVIDIA excited for the future of small form-factor computing. My primary issue with netbooks has been their power and performance, and ION addresses this and I can only hope it’s implemented well in the future.