When the last article was posted, I received a few questions on why I didn’t include GRAW 2 in the testing, and the truth is, I forgot all about it. I’ve never been a huge fan of the series and it somehow completely left my mind before I sat down to work on the article. But it’s here now, and I admit, it was a rather fun one to test.

This game was benchmarked a lot differently than the others, because each run literally took a minute. This run of course begins out on AGEIA Island, and each run I make begins at the entrance to the camp, with gas canisters in front of me.

At the beginning of each run, I simply back up a few steps, then shoot the canisters to deliver one nice physics-accelerated explosion, and then I proceed up the hill until I reach two small huts. I then throw a grenade into the left one and watch it go boom, and then toss another right underneath the northern fence, and also see it fall to pieces.

Lastly, I backtrack and head down a hill to apply an explosive to the side of a gas tank, then head back up the hill. I then face the tank, blow it up and wave to the two idiots who were dumb enough to stick around. Overall, this entire run takes around one minute to complete, but throughout, the physics exhibited put the GPU to good use. 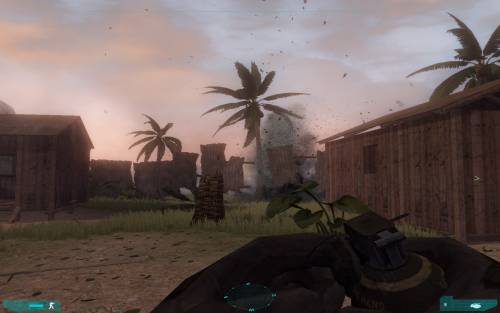 Below are the results from the run. Because the level cannot be run without some sort of PhysX accelerator, no CPU results are shown. 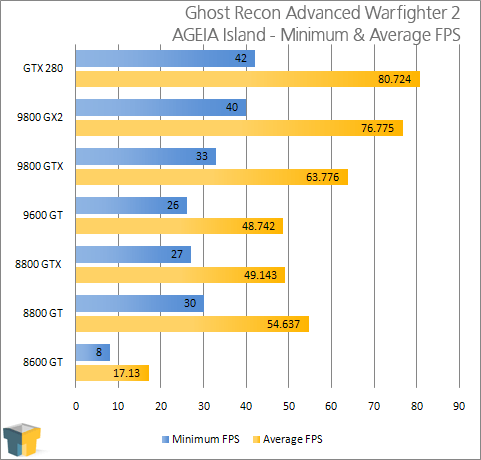 Once again, the results scale according to the GPU installed, and that’s not the least bit surprising. As mentioned earlier, the better the GPU, the better the experience. Depending on the GPU you have, you may either have to disable physics entirely (obviously not in this particular title), or lower your graphic settings in order to support the physics. It’s a trade off, but those with larger GPUs won’t have to worry as much.