NZXT is back with a sophisticated new case that proves to be one of the most “solid” we’ve ever taken a look at. It also includes a few innovations not seen in other cases. The primary downside? Small interior. Read on to see all of what this case has to offer.


Sadly, I do not have any photos of the installation process, as I am currently without a camera. So, bear with me! First off, this is a small case. It’s roughly the same size as the Apollo, but the inside leaves far less room to move around in. The first thing I did was install the motherboard, and that proved challenging as I expected. At first, I was unable to install the motherboard (DFI SLI M2R/G) with it’s onboard sound card installed. Luckily that’s removable, so I managed to get the mobo in that way. The reason it would not fit with the card is due to the back 120mm fan… it was clearly in the way. I blame the small design of the case moreso than I do the placement of the fan however.

Installing the power supply proved easy though. Took me half a minute… nothing was in the way. The same goes for the CD-Rom and hard drive, there was ample room. Actually, installing the CD-Rom shows off one of the coolest features of the case, so I truly regret not having images for your consumption, however the following image from NZXT is entirely accurate. 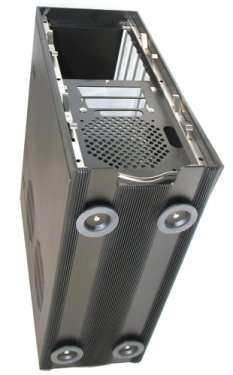 The front panel can be removed entirely, simply by pulling a lever underneath. Once removed, you can slide your CD-Rom into place and then return the panel. As noted in the bottom picture, this is exactly what the case will look like with your CD-Rom installed. Pushing the eject button here will do just that. Looks far better than a CD-Rom that clashes with the scheme of the case! 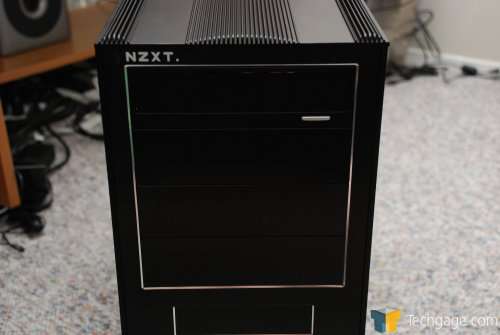 I use Corsairs Nautilus 500 water cooling on this rig, and this case did indeed prove to allow enough room to accommodate. If you have a setup that requires an internal pump or rad, you will be out of luck… don’t even think about it. Besides that though, there proved to be enough room for simple tubing, as the N500 is completely external.

Boom, installation complete. Overall, the -only- hitch I had was the tight area with the motherboard installation. It was the roughest time I ever had with installing a motherboard, so a little more room would have been appreciated.

To perform some temperature testing, I ran a series of benchmarks over the span of a half hour. Two instances of Prime95 are run, one on each core, for maximum CPU action. RTHDRIBL is run in order to keep the GPU warmed up, and HD Tach RW 3 is run for hard drive stress testing. All of these combined accurately stresses all components at the same time for maximum temperatures.

All of the components were in the NZXT Apollo prior to moving over to the Adamas, so I ran the same benchmarks in that case before installing them into the this one. During all of the testing, the room temperature remained at a somewhat cool 76°F – 77°F. Here are the results of the CPU Core 1, GPU and Motherboard. All temperatures were grabbed with Everest 3.0. 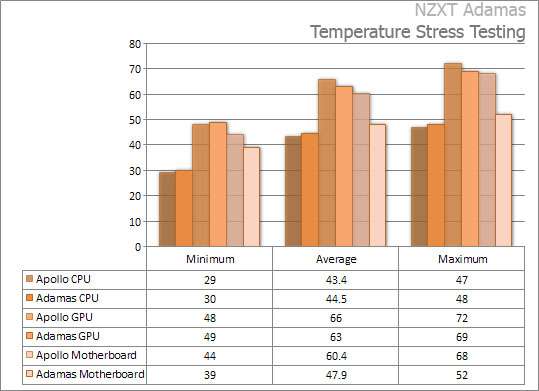 I have to admit, I am incredibly impressed that the cooling ability of this case proved better than the Apollo. The Apollo had a bit more room, but the Adamas felt like I had to crush everything together to get the door back on. So overall, I am impressed.

As a whole, the Apollo proved to be better for overall CPU temperature, but the Adamas took serious charge with the motherboard temps, shaving off well over 10°C! Even the GPU proved better as a whole.

As it stands, I am impressed with the Adamas quite a bit, but at the same time disappointed. First off, this is a great looking case… I absolutely love it. It’s pitch black in color, looks solid, and is solid. It’s designed for good cooling ability and as we have seen from our motherboard temps, that’s certainly true.

The design of the case… is great. There are enough unique features here to help the Adamas stand alone. The doors are easy to remove and just as easy to put back on. The front panel mechanism is probably by far my favorite. Simply pull on a lever and remove it, and then put it back in place and secure it again. Honestly, the coolness of this feature has to be seen in order to fully understand how well it works.

I am not entirely sold on the heatsink design though. I would have preferred a completely clean looking case, with the same fan placements. The way the top of the case is designed, it will collect dust and dirt easily. I have found myself required to use an air duster to it every few days, which is far more than anyone should need to.

What I also enjoyed were the CD-Rom and hard drive installation. It’s an old fashioned method, so you will need to grab a screwdriver.

In addition to everything I enjoy about the Adamas though, there are things that I equally dislike. The biggest gripe I have regards the motherboard installation. There is simply not that much room in there, at all. It’s design didn’t even allow the DFI boards sound card to be installed, and this is the first case I have run into this particular problem with. In order to fit it, I would have to completely remove the 120mm rear fan. 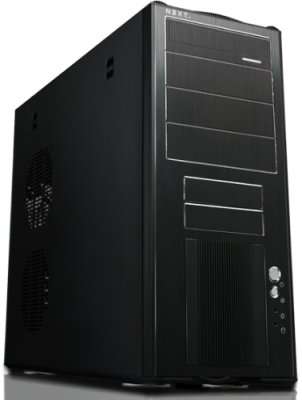 Really, that’s my only real complaint. The other complaint would be the $170 asking price. If this case was larger, it would be well worth it. As it stands, even with it’s innovative features I think the case should be priced a little more competitively.

In the end, this is a superb case, but would be near perfect if only it was a little larger. I would love to see a revision of this case to take care of that single concern. If there was a larger version available that allowed internal watercooling rigs, it would be a great combination. This case already proved better cooling than the Apollo, so a larger version should only help things.

In the end, I am awarding the Adamas a 9 out of 10, and I will explain why. Though the size bothered me, but this is one of the highest quality cases I have ever encountered. Even the motherboard mounting screws are shiny chrome colored… NZXT really pays attention to detail. If you want a full sized HTPC case to look great in your livingroom, this would be a great choice. However, it’s not for enthusiasts… if you have SLI or an internal water cooling rig, you will want to choose another case.