As I previously mentioned, before moving the hardware, idle and load temperatures of three heat-producing components were measured and recorded in the system’s original case, an Antec SLK3700, which is representative of most enthusiast-oriented ATX cases currently available. 3DMark 2006 was used to stress the CPU, northbridge, and GPU, and the same test with default settings was run in all configurations tested. For each temperature measurement, the motherboard’s onboard data acquisition system and internal thermistors were used.

A quick check of the Task Manager confirmed that 3DMark 2006 stressed both cores of the processor in our test. Recorded temperatures represent the maximum observed temperatures of the respective components during the stress testing. Through all testing, Cool n’ Quiet features of the motherboard were enabled, as they will likely be in actual use. The speed of the video card’s fan was automatically increased when it entered 3D mode.

In the NZXT duet, we found that the included twin 80mm case fans were adequate, providing just enough airflow to keep all three key components at temperatures that I consider acceptable. The operation of the two 80mm fans was not what I’d call “silent”, as they were still barely audible from a meter away from the front of the case at a 45 degree angle of elevation. As long as you aren’t overclocking any of your components, the stock cooling should be good enough for preserving livable noise levels. (In 3D mode, which is used by Windows Media Center, the video card’s fan spun up to a louder noise level which drowned out the case fans â€“ you’ll want a quiet or passively-cooled video card for HTPC use.) 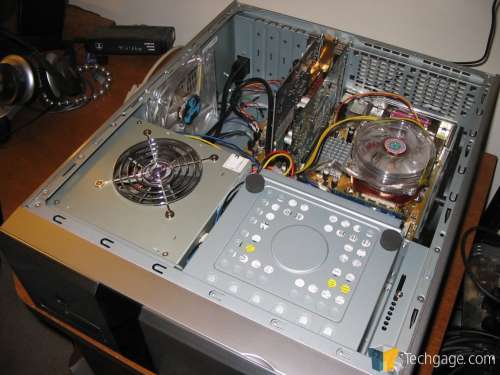 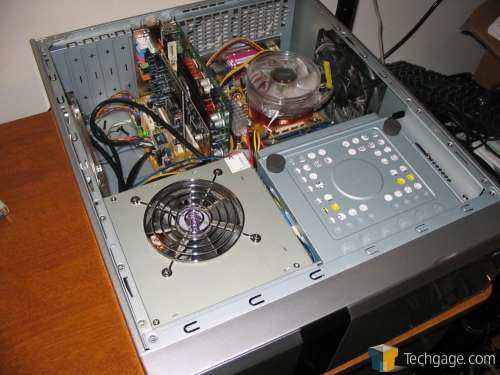 However, if you are interested in improving the Duet’s cooling or silence, it may make sense to use the 120mm fan locations instead. We, of course, were interested to see what was possible from this cooling configuration (listed as “Improved Cooling” in the charts and tables). In the SLK3700 case, Colin had used an Antec TriCool 120mm fan in the rear of the case, and a thermistor-controlled Power Logic fan in the front of the case, controlled by the temperature of the hard drives. In the Duet, the TriCool fan was used on low speed as an intake on the left end of the case (when used horizontally; the bottom when used vertically), and the thermistor-controlled Power Logic fan was used in the opposite end as an exhaust.

The thermistor control will allow this fan to speed up as the cooling demand increases, based on the temperature of the exhaust air. Even at room temperature, however, this fan ran more quickly and a bit more loudly than the low-speed TriCool fan. In developing our improved cooling scheme, we assumed that the case would be used in its horizontal orientation, as would be done in a home theater situation. The result was massively cooler internal temperatures, competitive with the Antec SLK3700 which previously housed the system’s components. 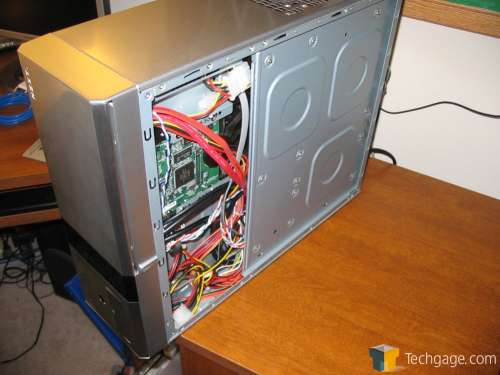 We decided that the dual-120mm crossflow cooling scheme was so effective, we were able to remove the plastic fan duct in the front of the case and allow the PSU to dump its heat back into the case, and we removed the dual-80mm rear fans that were supplied with the case in order to allow cold-air intake over the CPU and chipset. Those who are using a particularly hot, inefficient PSU may choose to leave the plastic fan duct in place, though use of the included rubber feet is essential to maintaining enough clearance underneath the case (when used in horizontal orientation) for the PSU to effectively exhaust its air. Removing the front fan duct allowed us to stash the excess PSU wiring in that space.

The Power Logic thermistor-control fan was a bit more noisy than we had hoped, so our particular embodiment of the dual-120mm cooling scheme was quiet, and quite livable, but not anywhere near what we’d call silent. In later testing of the system in a home theater setting, however, the fans were not audible from the listening position, and only somewhat audible in a completely silent room when standing in front of the case. We feel most enthusiasts will want to explore the use of dual 120mm fans instead of the provided 80mm fans. 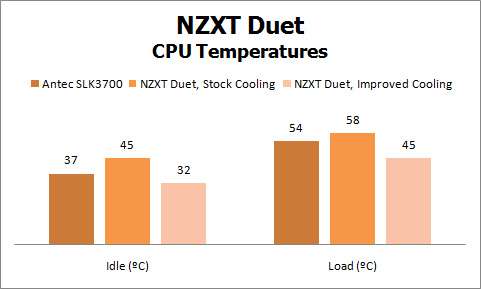 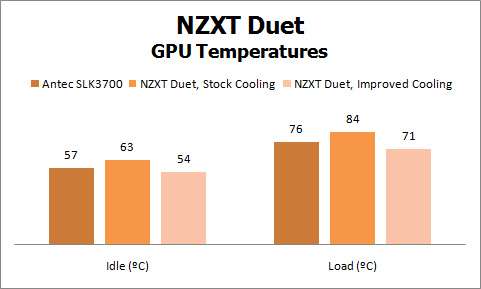 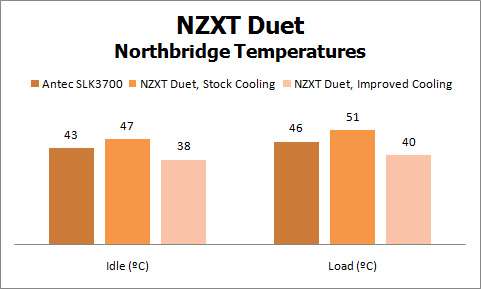