You might know Hades as being the God of the Underworld, but after taking a look at this chassis, you might begin to think he was the God of the “Meshworld”. Yes, there’s a lot of mesh used here, along with stark angles, creative lighting and a smart design that delivers fantastic cooling performance. But, can it unseat CM’s 690 II?

Any time you design and plan a new computer, you have many factors to take into consideration. The most important of all is the thermal capabilities. Heat is the great destroyer of computer parts, and with CPU and graphics card manufacturers continually pushing the heat envelope higher and higher, you cannot overlook this detail.

Second on the list has to be noise. A chassis without proper noise control will spoil all your dreams when you are forced to either unplug fans or turn up your volume to uncomfortable levels just to overpower the jet engine roar of your case fans. Having the ability to adjust the level of noise is also a growing desire amongst enthusiasts.

Finally, the overall appearance must be taken into account. I have had more than a few chassis roll across my desk that had the first two bases covered but failed miserably in the style department, and as such, they were often overlooked by potential buyers. I know that when I am doing a personal build, I tend to not care much about the looks, but far too often this is the deciding factor for the general population.

On deck for critique today is the NZXT Hades chassis. Aimed for the enthusiast market, the Hades is a member of the Crafted Series steel mid-tower design. With a full compliment of fans, a fan controller, as well as tons of mesh, there is no doubt that the main design characteristic is cooling. Coming in at $99.99 US, NZXT has aimed it squarely at the mainstream market which does contain a lot of heavy hitters. Let’s take a closer look and see just how well it does its job.

The front of the Hades is one of the most unique I have seen in quite some time. The use of angles and texture is almost startling. Unlike most chassis with a door on the front, there is nothing impeding intake airflow from the massive 200mm fan. The door itself houses the temperature LED’s as well as the power button. While it seems to be a 50/50 proposition that the end user will like having one, the door is definitely a positive styling cue. 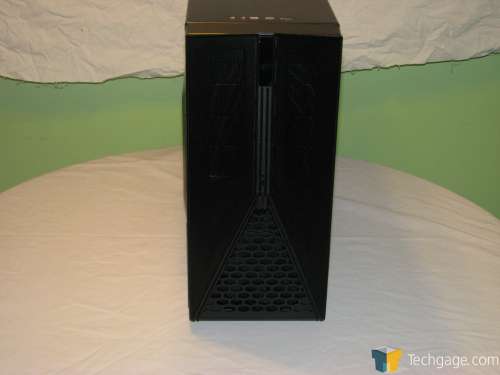 Behind the door we find the dials for the dual channel fan controller, the reset button and the ODD drive area. There are four slots for DVD drives or whatever other type of 5 ¼ bay peripheral you have in your build. The fan controller can handle over 8W per channel so you can have little fear of overloading them. I like how the slot covers are meshed to allow airflow as well. With quad-core computing gaining in popularity, it never hurts to have more air flowing through. 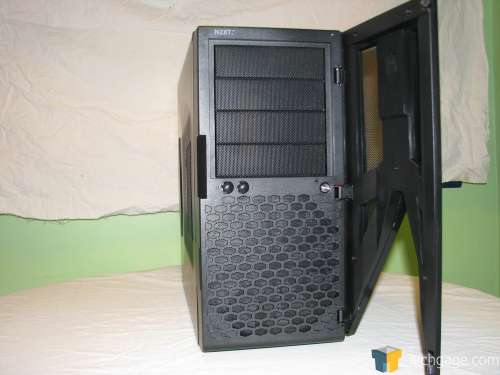 Up top we find the front mounted I/O panel as well as dual fan openings. The I/O connections are standard with the headphone, microphone, dual USB and eSATA ports within easy reach for your use. You are able to mount up to two 140mm fans in the roof of the chassis with a single 140mm fan already included and installed. 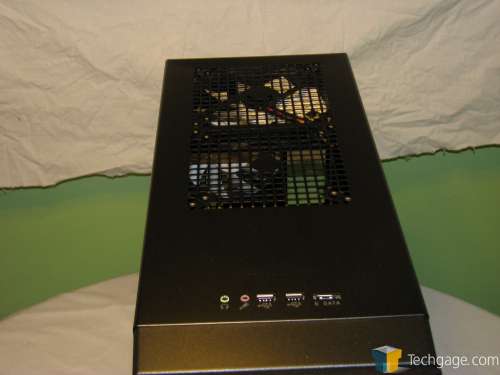 The left side panel sports another 200mm intake fan as well as a vent forward in the drive mounting area. I really like the detail here as the panel is stamped and shaped instead of just being flat. Build quality is very good with little perceivable flex when given the twist test. 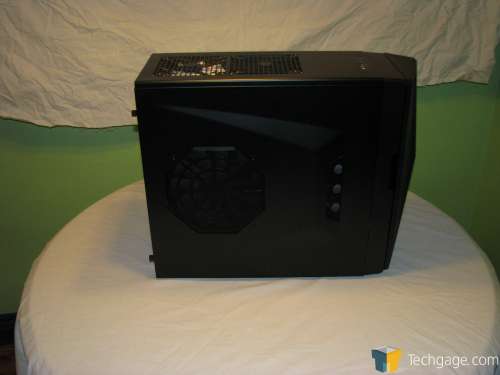 The rear of the case is also very straight-forward in design. A single 120mm exhaust fan flanks the rear I/O area with lots of venting below. I personally really like the vented PCI slot covers since this area is very susceptible to heat buildup when solid covers are employed. Nice large grommeted holes for passing water cooling lines are included. 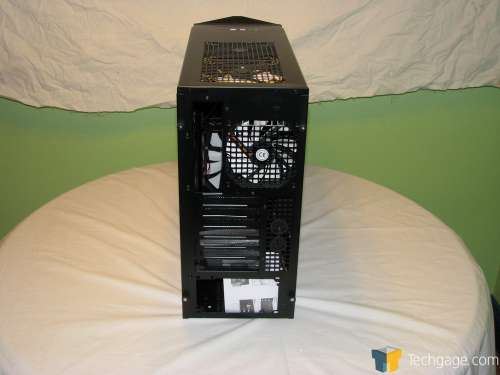 The right side panel cover is a mirror image of the left, minus the fan. Again, build quality is very good with no flex at all. We can also see the large hinges used for the front panel. 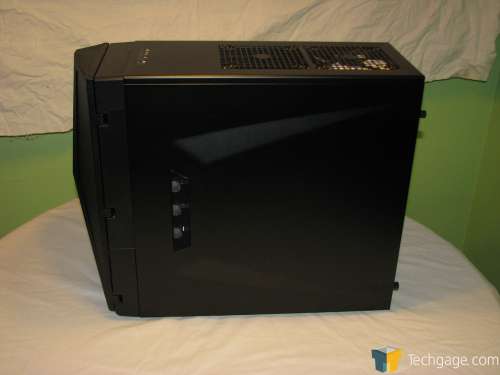 Next, taking a quick look below shows off the easily-removed and cleanable power supply fan filter that will stop your PSU from sucking in all the dust that will naturally collect underneath your PC. The case feet are a nice rubber design and they work well to isolate any vibration that could travel to your desk. 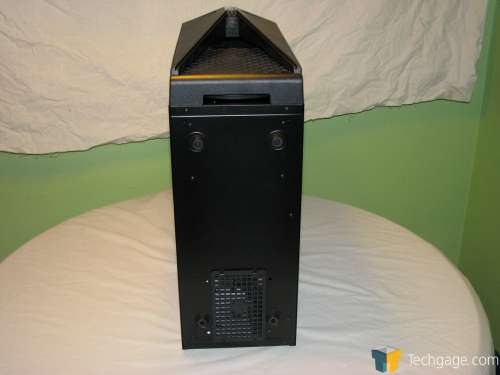 As we head inside the belly of the chassis, I wanted to show off the high-quality 200mm fan used on the side panel. In testing this fan, like all the fans included, I really was impressed by the lack of noise, while still performing very well. 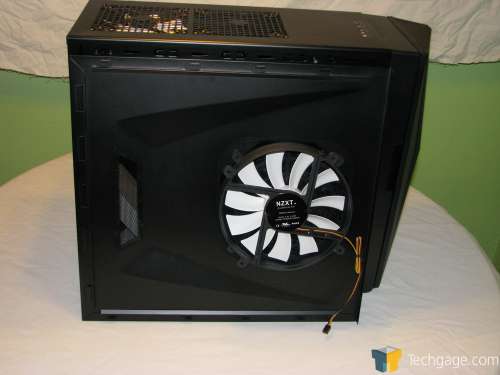 Time to check out the interior!