If on the search for a great-looking gaming chassis that’s also portable, NZXT might have you covered. Their “SFF” label might be a bit of an understatement though – this case is far from being small. Despite that, it looks good, offers a whack of functionality and is definitely worth a look.

When it comes to a portable gaming rig, the choices for building are few and far between. You can go with a Shuttle or other barebones micro case, but these are fairly limited by temperature and size restrictions. Most barebones kits will only take a single-slot midrange video card. Fitting them with an 8800GTX or an HD3870 is pretty much out of the question, and most high end processors will run pretty hot.

Your other option is to build a MicroATX system. Most often, fitting a high end video card in a MicroATX case is going to difficult at best – odds are, it simply won’t fit. This is where the NZXT Rogue comes in to play. The Rogue is designed to be a stylish MicroATX case with enough room and cooling to fit all of your high end components while remaining easily portable. Its internal design is more like a full ATX case that has been re-arranged.

Coming in at around $150, the Rogue certainly isn’t the cheapest MicroATX case, considering it doesn’t come with a power supply. NZXT is touting this case as having “Enormous Power Within”, so let’s take a closer look and see if it lives up to the hype.

The first thing I noticed when the Rogue arrived on my doorstep was the enormous box. I knew a MicroATX case was coming, so I didn’t expect to see a box this large. Granted, the case was packed pretty well in styrofoam, but make no mistake, this case can barely be called small form factor. 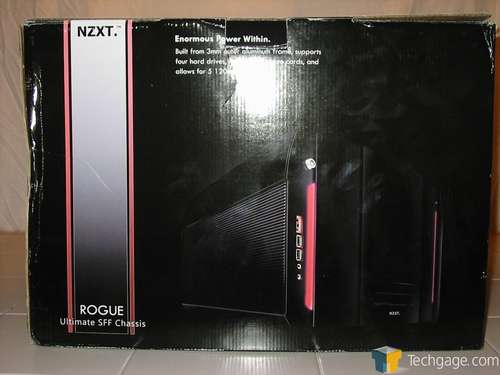 From an aesthetics standpoint, NZXT did a nice job. Our review sample is black with blue LEDs and blue lighted fan in the rear, which shows through the window in the top of the case. The door provides some contour to the front of the case and is bordered by the LED strips. I do have one gripe about the LED strips; our review sample’s LED strips were covered with fingerprints on the inside. This was saddening in relation to how nice the rest of the case looks. 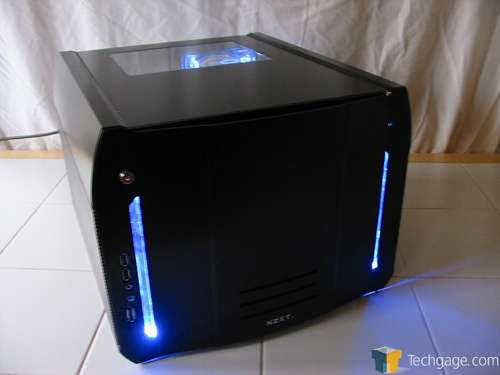 The build quality is wonderful. As you may have notice on the box, the case is made almost entirely of 3mm Aluminum. To put it another way, this thing is beefy. While the front door does add a certain aesthetic, it adds quite a bit of weight to the case as well. I’m personally not a big fan of cases with doors. While they add some aesthetic value, I find the have a tendency to annoy and just get in the way after a few weeks of owning a case. In particular, the fact that the door covered the power and reset buttons on this case annoyed me most of all. 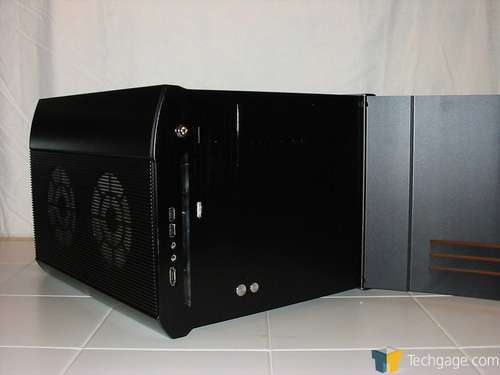 The Rogue has a nice compliment of front panel connections. Audio, USB, and eSATA are all present and located outside of the door. 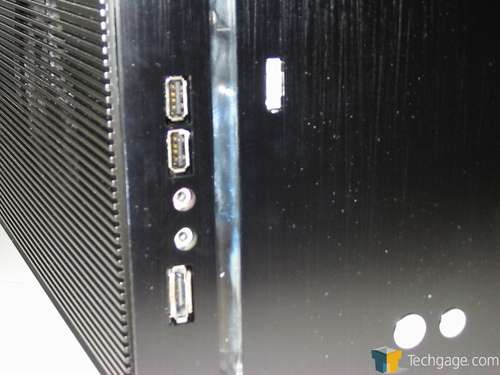 At the rear of the case I was pleasantly surprised to find a removable motherboard tray, a 120mm fan, and an interchangeable power supply mount. The case comes with the standard PSU mount installed, but you’ll find in the box an extender offering another inch of overhang out the back. This is intended to provide space for a 1000W+ PSU. NZXT definitely put some thought into making sure everything would fit. 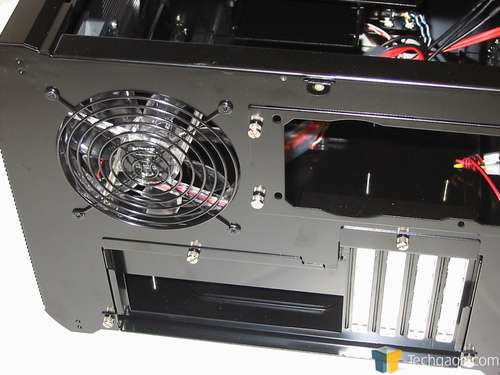 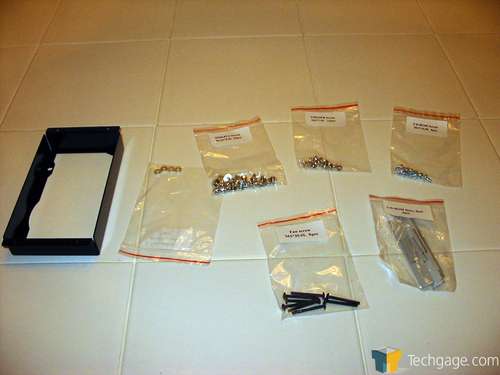 NZXT also includes a carrying strap with the Rogue. Don’t get too excited though, after carrying my rig to the first LAN Party, the plastic rod in the handle had already started to rip through the woven nylon covering. Disappointing to say the least. 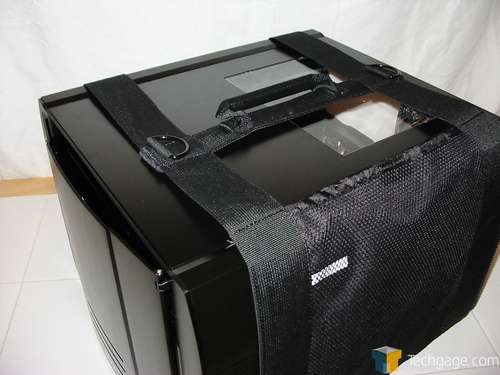 The Rogue comes installed with three 120mm fans, with mounting points for two additional 120mm fans. Cooling certainly shouldn’t be a problem like it tends to be in micro cases. Here you can see a side panel with the original NZXT fan and one of my Evercool Evergreen fans. 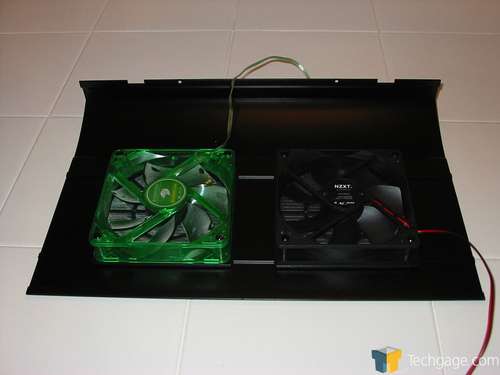 Next we will take a good look at the Rogue’s interior, followed by our installation process.