I hate couriers. I hate them. They’re late, they don’t leave slips if you’re not home and they seem to abuse just about everything they deliver. This isn’t the first time I’ve complained about the state of our review samples when they’re dropped off and I’m sure it won’t be the last, but it’s a wonder that any of the samples we receive actually make it to us intact. If the courier is Bobby, then our review sample is Whitney. What? Too soon?

Before I’m given my pink slip for that intro, let me introduce you to what arrived in a beaten and battered box all the way from California; the Switch 810 from NZXT.

In January, NZXT launched this monster of a case after some entry-level and mid-range offerings to close out 2011. The Switch 810 is a steel, “hybrid full tower” case aimed at the enthusiast crowd. It can house mini-ITX, micro-ATX, ATX, E-ATX and XL-ATX motherboards and comes in black or white inside and out.

So with my hatred for all things courier set aside, let’s dive right in.

The majority of the front panel is made up of high gloss plastic while the edges are capped with a rubberized “soft touch” coating that seems to be used more and more on a variety of products. This change in texture offers a bit of contrast and serves to somewhat offset the shininess, which was a nightmare to keep clean of my grubby finger prints. 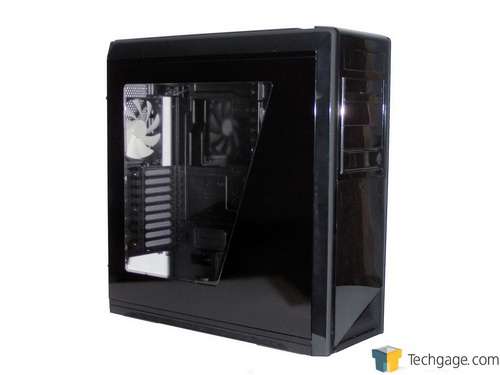 At the top is a flip-up cover that hides the front panel I/O area, which has also been given the soft touch treatment. From left to right are two USB 2.0 ports, a pair of USB 3.0 ports, an SD card reader, 3.5mm headset and microphone ports, the back panel LED on/off button and the reset button.

Below the front I/O area are four drive bays. The top bay can hide a 5.25″ optical drive behind a flip down bezel for a clean exterior look, while the next two bays can hold typical 5.25″ devices out in the open. Finishing things off is the bottom bay that hides a hot swap drive tray capable of holding 2.5″ or 3.5″ SATA drives behind the shiny cover. 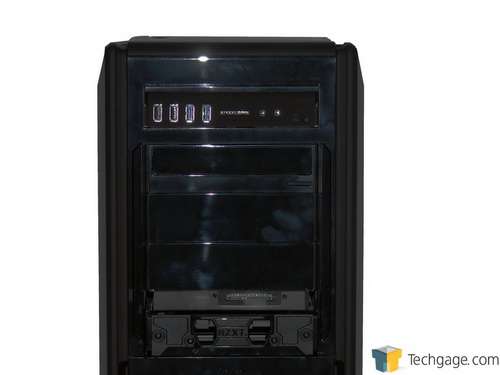 Heading down to the lower half of the front panel finds a quick release cover that allows access to the 140mm intake fan with a simple press at the top. A second optional 140mm fan can be installed here or the stock fan can be swapped out for up to two 120mm fans. Rounding out the front at very bottom is a removable filter that’s accessed by pushing in to release the latches so that it can be pulled free. 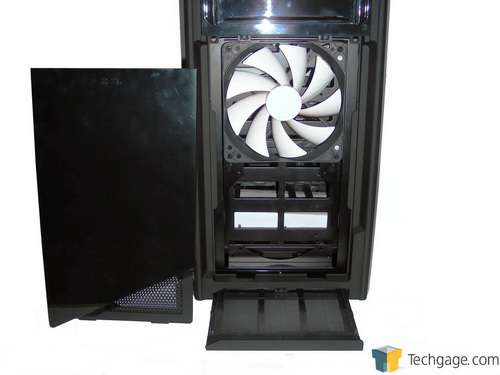 Over on the left side is a very large window for those who like to show off the guts of their system. Along the bottom of each side panel is a mesh area that adds a bit of style while allowing for extra air flow. The same high gloss finish found on the plastic accents is also carried over to the metal surfaces, which again is very pretty, but very tough to keep finger print free. 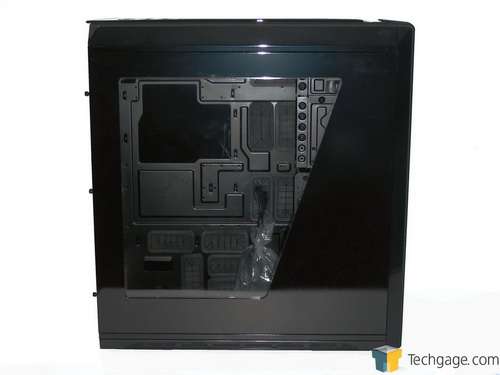 The rear of the case has the motherboard I/O opening in the top left and a very large mesh opening to the right for the included 140mm exhaust fan. NZXT has decided to try something different by using slots instead of static mounting holes for the fan. This allows users to direct internal airflow to where it will be most effective such as over hot VRMs by positioning them vertically. This is only possible when using the included 140mm fan or a single optional 120mm fan. There’s room for up to two 120mm fans, but at the expense of this flexibility. Further down are the 9 mesh PCI slot covers and four grommet-lined pass-through holes for water cooling along the right edge. 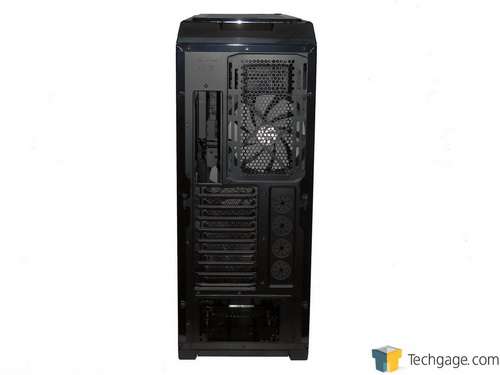 Now for my favorite new feature: white LEDs that light the motherboard I/O and PCI slot areas! This may not seem like a big selling-point for many, but some users routinely have to pull their cases out of its hiding spot to plug in peripherals or switch connections because there’s not enough light to see behind the case. For them this may become a godsend. 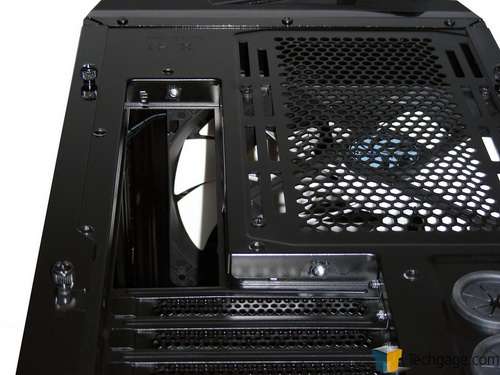 At the bottom of the back panel is the power supply opening and another removable fan filter that slides out in the same manner as the filter found at the front of the case. 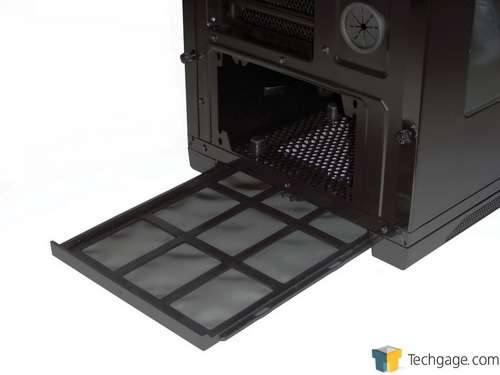 Down both sides of the back panel are three thumbscrews that keep the side panels secured – but there’s a twist. To allow for easy access to the interior, the top and bottom thumbscrews on each side can be removed and the middle ones, which are spring-loaded, can be left loosened. When the time comes, they can be pushed down to allow the side panels to swing out and be removed. 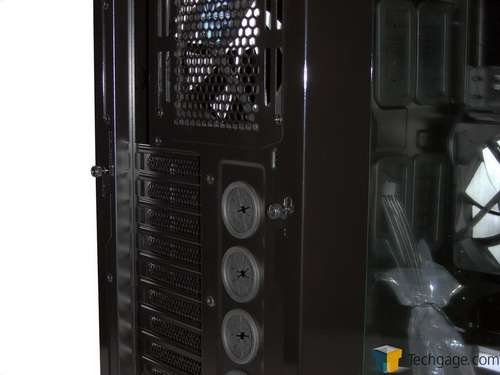 The right panel is completely solid so we’ll move on to the top where the power button is found towards the front left and the white hard drive activity and power LEDs tucked under the edge of the removable top cover. Flanked by narrow strips of metal mesh, this cover sports slats which can be opened or closed to suit the user’s needs by pulling forward or pushing back on the bar towards the rear. The entire cover can be removed by pushing down on the back edge to release the latches. Hidden under the cover is another 140mm exhaust fan with room for two more or up to three optional 120mm fans. Users who want to slap in some water cooling are in luck as well since the Switch 810 can support radiators up to 360mm long in this location. 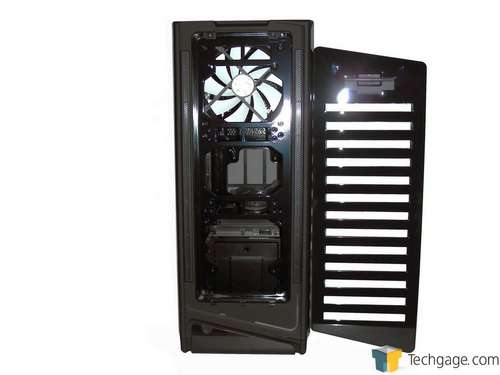 Flipped up, the rubber case feet are visible that serve to allow for proper airflow while dampening any vibrations. There’s also a better view of the two removable filters that cover the entire bottom area, which means less dust bunnies to clean out down the road. 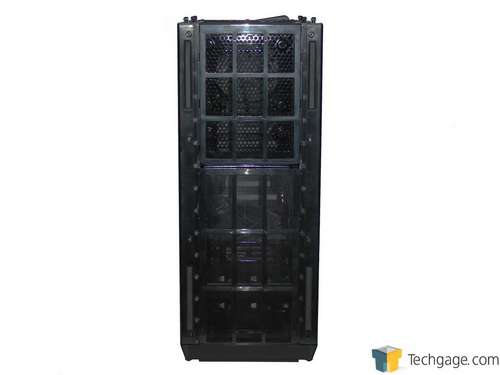 Luckily, the couriers didn’t do any major damage aside from punching out the side window and knocking the drive covers loose, because there’s a lot more to check out when the panels come off as we take a look at the interior next.