It was nearing the end of 2008; Intel had just released its widely-successful X25-M SSDs into the market. At the time, these SSD delivered the best performance, the best reliability, and the best sustained performance without any of the prominent shortcomings of the JMicron controller-based SSDs that followed rapidly on its heels. Even six months later, no drives were anything close to competitive with the X25-M. That is, until the OCZ Vertex came along.

The Vertex was the first competitive consumer SSD to compete on similar performance at a lower price point, and inside was the controller from a relatively unknown South Korean startup called Indilinx. Initially, performance still left something to be desired, but after months of firmware updates the resulting Barefoot controller was not only stable, but saw significant performance increases in random IOPS. That made it a real competitor to the then-$595 80GB Intel SSD. 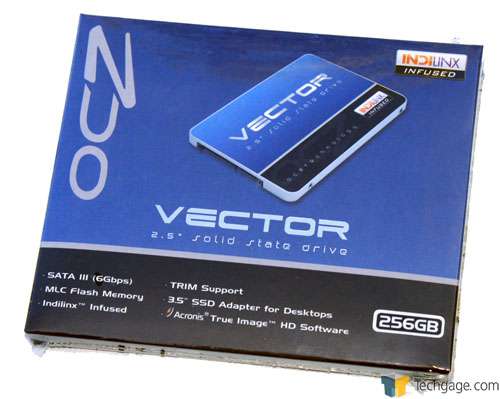 That’s the story behind the Barefoot 3 controller and its name. The Barefoot 2 only saw limited use in the OCZ Vertex Plus SSD, as by that point in time another relatively unknown startup called SandForce blew into the scene and upended the SSD market in a big way. While many enthusiasts assumed Indilinx was down and out, unable to contend with the rapidly scaling performance of each successive generation of major SSD controller launches, OCZ Technology (at the time, primarily a memory DRAM company) knew otherwise and made the bold decision to outright buy the company.

The Barefoot 3 is the first true culmination of that buyout, as while OCZ drives like the Octane and Vertex 4 both used Indilinx firmware, they still utilized Marvell silicon for the controller. As the break from the Vertex name hints, the Vector is the first top-to-bottom Indilinx SSD since the original Vertex. 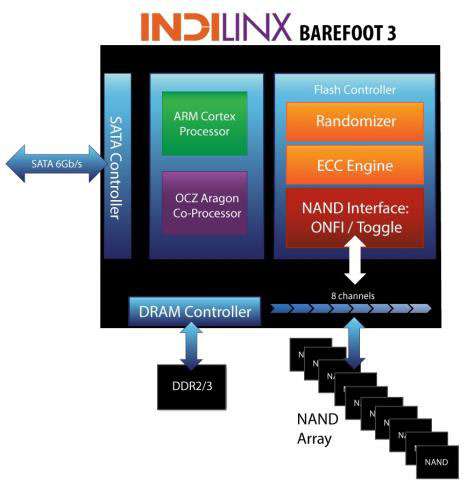 The Vector makes a clean break in more ways than with just the name. The drive itself is only 7mm tall, as opposed to the typical 9mm of other SSDs. Past OCZ drives sometimes featured badly-fitted molded plastic lids, but the Vector surprisingly, even refreshingly uses a heavy all-aluminum housing that exudes durability. There’s a MacBook Pro analogy in there somewhere. Also, instead of the basic disk transfer tool, the Vector comes bundled with a key to activate Acronis True Image for disk-cloning use. 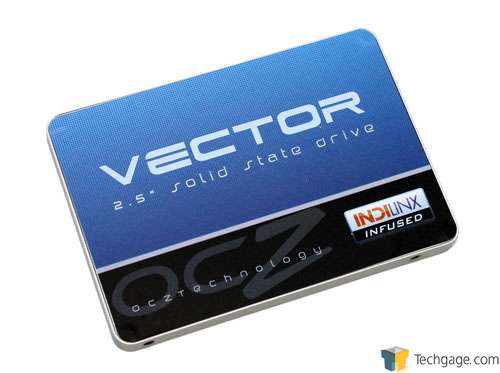 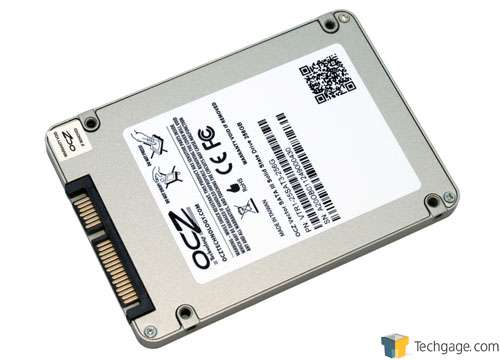 Beyond the Barefoot 3 itself, the drive utilizes 25nm MLC NAND from IMFT in the typical 8-channel arrangement, with the 256GB model packing a pair of 256MB low-power DDR3 chips for cache. Also something newly-introduced with the Vector is defined warranty expectations. The Vector comes with a 5-year warranty or a guarantee of 36.5TB of disk writes – whichever comes first. Some SandForce drives in particular from OCZ would begin to throttle disk write speed in order to preserve the NAND lifespan in the event of extremely abusive wear, but this time OCZ is letting consumers use the Vector however they wish. The company simply states that the drive is guaranteed for 36.5TB and anything beyond this point will annul the warranty.

36.5TB works out to be 20GB worth of writes per day, every day, for five years. Except for fringe cases, enterprise use, or simple abuse, 20GB of writes per day is considerably more than what a heavy computer enthusiast would use on average over any given week. We have to give OCZ some kudos here for being upfront with these details and applaud them for doing so.

We won’t rehash the performance specs given in the table, but suffice to say, on paper these are some of the highest IOPS ratings we have seen yet for any SSD. Even so, OCZ has made a point to emphasize that it didn’t just strive for performance with the Vector, but set out to deliver good sustained performance. All SSDs will lose their factory-new performance as they are used; this is normal. On modern SSDs this performance drop is not tangible and it will reach a point of equilibrium once it the NAND reaches saturation (meaning all the NAND was written to at least once, not that the SSD itself is full).

On the next page, you can review our testing methodologies along with our test system. Immediately after, we’ll get started with our performance results.