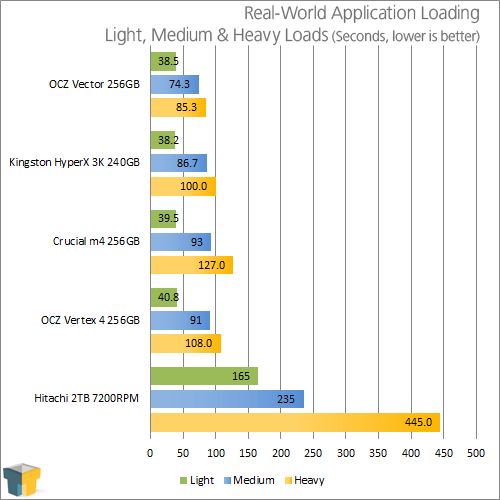 First, just to showcase the power of an SSD to the uninitiated, it is worth pointing out that even the most demanding heavy batch test can complete in significantly less time than it takes our reasonably recent model mechanical hard drive just to boot the computer and finish the light batch test. SSDs are just that much faster.

The Vector does well, once again delivering the lowest times to competition for our medium and heavy tests. It’s also worth noting that in addition to the best time, the anti-virus scan across 19,748 various program files only added an additional 11 seconds to the medium batch time as opposed to 15-35 seconds for the other SSDs. That would be the Vector’s optimizations for high queue depth showing itself yet again.

For those curious but not wanting to do the math, the sole HDD in our graph managed a bit over seven and a half minutes for what the Vector could do in less than 90 seconds. And this is for a desktop hard drive – notebook and laptop users would see an even larger benefit from the transition to any SSD.