Although high bandwidth is nice to have, it can be even more important to have a lower latency depending on the type of application you are running. After all, the quicker a byte can be retrieved, the faster the process should finish. For our tests here, we once again use both Everest and Sandra, with the latter being used for more in-depth latency analysis. 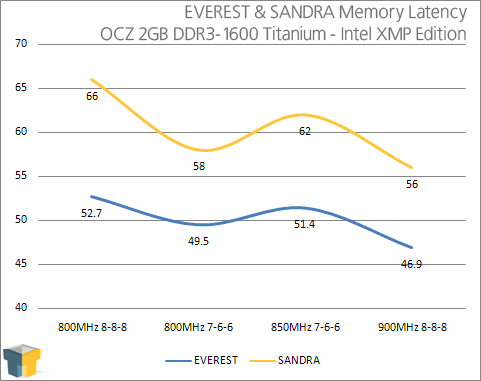 Not surprisingly, both Everest and Sandra scaled well with each other, although their latency algorithm differs, quite noticeably. Interestingly though, even though our 900MHz overclock had 8-8-8 timings, it’s overall frequency helped it prove faster than even our 850MHz setting with 7-6-6. I didn’t expect to see that. In fact, our 800MHz 7-6-6 proved to be the second-best setting. Not bad at all, considering it’s accomplished with an XMP profile. 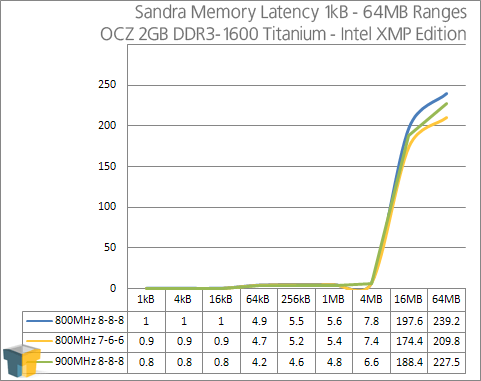 Our in-depth analysis shows a slightly different story, however. While our 900MHz overclock proves to be stellar with lower byte ranges, larger ranges is where it begins to slow down. So for processes where small amounts of bytes are passed around, our top overclock excels, but for the latter, the XMP profile is the sure-fire setting.

Though I didn’t expect it to be a very overclockable kit, I was proven wrong with it being able to hit DDR3-1800 speeds and remain completely stable – all while using very reasonable voltages. As always though, I recommend using a RAM fan for any kind of overclocking. You don’t want to risk hardware overheating if you don’t have to. RAM fans are inexpensive and give you better overclocking potential. 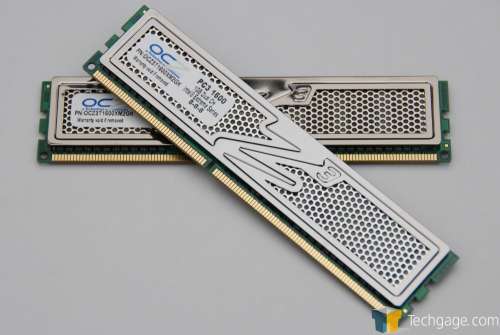 I mentioned in the intro that DDR3 is slow to catch on, and pricing is the prime reason as to why. This kit is no real exception, at around $350, but it’s far more reasonable than it would have been had it been released last summer. Even though DDR3 pricing leaves a bit to be desired, this kit performs extremely well for its price-range, and I’d recommend it to anyone who wants to get hooked up with a DDR3 system.

Where the kit shines is with its XMP profile. I was surprised to see that this particular kit cost less than most of the competition at these speeds, and even though the competition also offered CL8 timings, these were the only ones to offer an XMP profile to bring those to a much more reasonable 7-6-6. Essentially, paying for an 8-8-8 kit gets you a 7-6-6 kit.

But here’s where things get a little tricky. On one popular e-tailer, OCZ has another DDR3-1600 kit that includes 7-7-7 timings… for $279. This is of course a supply & demand issue, in full force. It goes without saying though, if you are looking for a great kit at these speeds and want the best price, the Platinum version would be the route to take. If there is any overclocking room in that kit at all, you could potentially achieve similar overclocks to what we’ve seen here, all while saving some green.

When all said and done, I am going to award the kit we’ve looked at today an Editor’s Choice award for a few reasons. It delivers on its promises while going the extra mile on the side, which was unexpected. They proved completely stable at DDR3-1800 speeds (while those speeds at stock cost a lot more), its XMP profile worked beautifully and the titanium spreaders struck my fancy. Platinum is so out! If you can find this kit for a more reasonable price, I wouldn’t hesitate to recommend picking one up. Otherwise, stick with the less expensive Platinum.