At the time of this review, there is one important piece of information I am not aware of… the price. You may think, “Oh, 8800 eh? $600!” That won’t be the case at all, because these are thrown into the Gold mix for a reason. Gold series are designed specifically for gamers who want extreme speed and reliability. They are not designed for overclocking however. Out of the 5 or 6 OCZ Gold kits I have used in the past, only 2 overclocked decently.

That being said, if I were to throw a ballpark figure out there, I would assume these modules would retail for around $350. Anymore than that, it would have made more sense to throw them in the Platinum line.

For such high speed, you are probably curious as to the chips used. They are none other than Micron D9GMH, as you probably already guessed ;-)

These chips are popular lately. They seem to be following straight in the footsteps of the old school D9 fatbodies for their extreme tweaking ability and the extent to which they can be overclocked. So… overclocking chips in a ‘non-overclocking’ kit? Strange as it may be, these chips may have had to be used in order to reach the speeds in the first place. While Elpida, Mosel and Infineon can hit high frequencies, they tend to have serious stability issues in various motherboards, and require a lot of tweaking by the user to get them functioning properly.

Since we are dealing with GMH here, we will likely have a lot of overclocking headroom. I don’t necessarily mean to push these past their 550MHz stock speeds, but tightening of timings. I was fairly confident that these should do 5-5-5 at 1100 speeds, but there was only one way to find out!

I found out quite quickly that these modules are rather picky when it comes to a CAS Latency of 4, meaning pushing the modules as far as they can go while retaining that rating. While DDR2-800 used CAS4 no problem, DDR2-900 was a different story. At those speeds, MemTest proved stable in addition to other benchmarks, but Super Pi would halt almost immediately. If you are planning to run these at 400MHz, you will have no problem, but anything else with CAS4 will be short lived.

Technically, the furthest I can push memory on this CPU is 570MHz, because my 4600+ is unstable on anything beyond 2.85GHz. Sadly, I wasn’t even able to hit that with these modules. Being GMH that they are, I expected to. I guess if GMH were to be fussy, it would have to be on value modules.

When it’s all said and done, I am pleased that the timings were capable of being tightened at stock frequencies. Here are a few screens showing the stability, and the rated speeds. The third picture is a 32 Million Super Pi run at the max overclock. 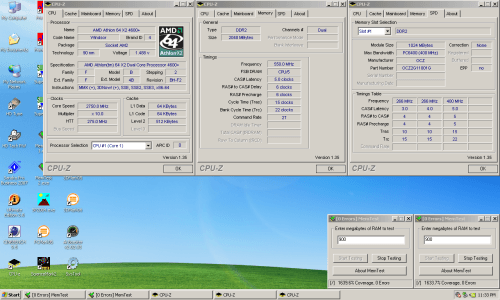 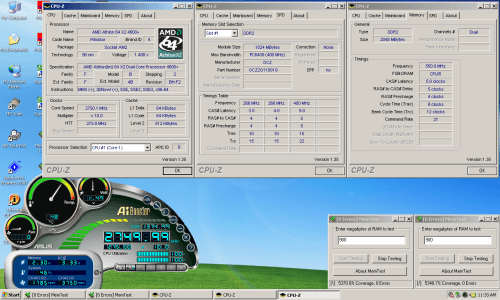 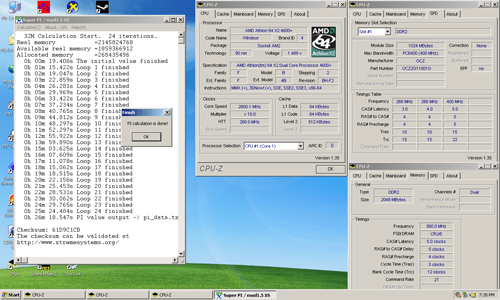 Onward to some benchmarking!

The kit I chose to compare the PC2-8800 to is the OCZ VX2 PC2-8000. This kit is the top of the OCZ line, but uses similar chips to the ones we are looking at today. Although the VX2 has far more pushing power than the PC2-8800, we will be using the same settings on both kits.