The Gold PC2-8800 beat VX2 in the first round, but failed in the rest. Note the 0 as the second result for the Gold… this is due to the test not running at all because of the issues with CL4 as mentioned in our overclocking report. 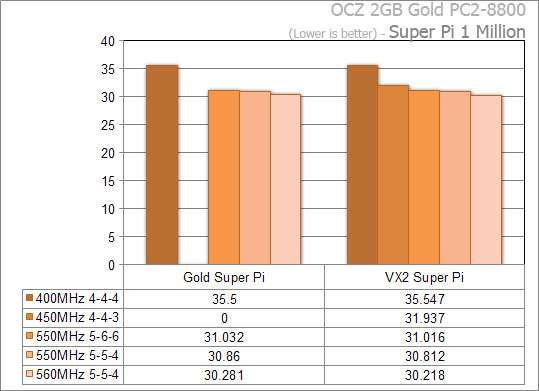 When it comes down to it, there are a few things I love about this memory, and things that I don’t. First, this is some great memory if you don’t plan on doing any overclocking or tweaking. It delivers blazing fast 550MHz speeds out of the box, and reliably so. Though the stock timings are a little high, we found that 5-5-4-5-12 with 2.3v worked flawlessly. That minor tweak increased our Everest scores by 200MB/s… not bad for something so simple.

The downside is that the memory is very fussy when it comes to CAS4. At DDR2-800 speeds, I didn’t find any instability whatsoever, but moving towards DDR2-900, problems became evident. I found this quite odd from D9GMH, since all previous modules using these chips I have used, have done 4-4-3 @ 500MHz without an issue. Not only was CL4 a little problematic, but trying to run 1T timings at DDR2-800 speeds was also a little iffy… at first. For that setting, I had to increase the voltage to 2.0v, while other modules on hand do it with 1.8v or 1.9v. Not a big deal really, but this adds to the fact that this is fussy memory. 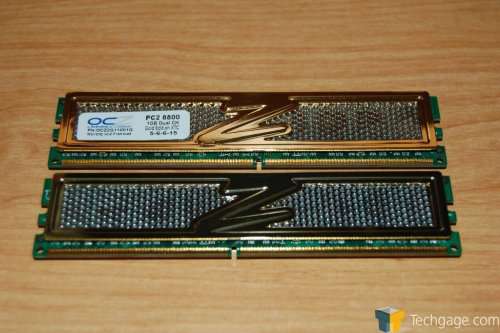 Another downside as mentioned earlier, is that I am currently unaware of the pricing. I strongly believe that these will retail between $350 – $375, but please don’t quote me on this. Being in the Gold series as they are, I simply cannot see them costing anymore than this.

Is that price even worth it? Yes and no. It’s a yes if you plan on purchasing these modules and -don’t- plan on overclocking. Even if you do purchase them though, I highly recommend at least using 5-5-5 timings… to make things a bit better. Not too many companies out there will guarantee extreme stability at these speeds, so if you want the fastest memory out there that’s covered by a warranty, you won’t regret a purchase.

However, these modules are quite picky when it comes to tweaking… primarily with CAS and possibly 1T at low frequencies. I was also unable to push them past 560MHz with any sort of reliability, so it’s impossible to recommend these for anybody who wants a lot of tweaking headroom. If you are looking for an OCZ kit that will offer you a lot of flexibility, I recommend checking out the 7200 EPP we reviewed last week. It retails for just under $300, and as we found out, it can be pushed quite far.

Kudos to OCZ for trying to push the boundaries here. They are officially the first to release a DDR2-1100 part, and hopefully have a huge slew of firsts lined up for the future. I only wish these had a bit more tweaking ability. As it stands, I am awarding the Gold PC2-8800 an 8 out of 10. If you want great speeds and extreme reliability, these will be worth your time. If you are an overclocker and love tweaking to your hearts content, be sure to check out our review of the Platinum PC2-7200 EPP.