What do you get when you take one part spunky CEO and one part enthusiast memory and a dash of color? Apparently you get the Special Ops Edition memory. Special heatspreaders are nothing new, but it’s rare that you will see a multi-color one. Up until now, all of OCZ’s memory has been assigned a unique color, depending on what series it is from. OCZ CEO Ryan Peterson thought it would be fun to try throwing a camo skin on some kits, then throw them into the wild. And when the press release came in for these ones.. I don’t think anybody was expecting this!

Do these modules offer anything else exciting besides the coat of paint? Nope, not really. All three kits are virtually part of the Gold series, though they make no note of it. For DDR1 users, they released a 2GB PC3200 kit with 2.5-3-3-8 timings, which is still not too shabby. On the DDR2 side, they released a 1 and 2GB kit rated at DDR2-667 speeds, with 4-4-4-12 timings. Of course, the other kit released is the one we are taking a look at today. This one also comes in at 1GB and 2GB sizes at PC2-6400 speeds. As expected from a ‘value’ kit, the timings are quite loose, at 5-5-5-12. 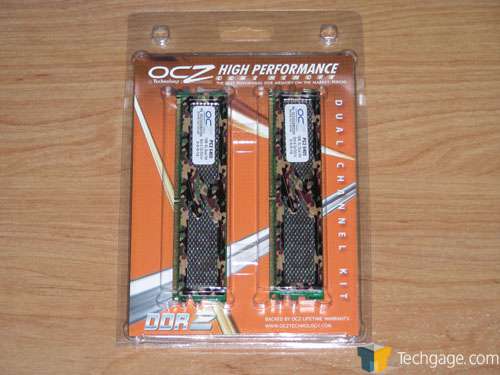 Serious gamers put heavy bandwidth requirements on their memory, and put a premium on both superior performance and dependability. The new OCZ Special Ops Edition (SOE) memory modules and dual channel kits feature the ultimate balance of speed, reliability, and high capacity, making them an ideal solution for gamers. This new line of OCZ memory features a distinctive camouflage motif heatspreader and a price tag that has an edge over competitors. 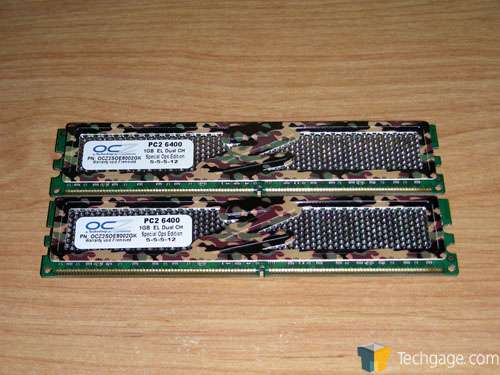 I am unsure what chips these modules use, but they are likely some Elpida variant. For the rated speeds, you will be required to use 2.0v, which is -somewhat- higher than other PC2-6400 kits out there, especially for these timings. Like all other OCZ kits, these modules come with a full lifetime warranty, and are guaranteed up to 2.2v ±5%. Our first goal will be to see how well these modules will overclock while retaining the warranty, and if need be, we will go higher.