The modules arrived in the usual orange backed blister pack, which do a solid job of protecting the modules. On the front of the sticks is the small warranty sticker, which includes the timings and model number. It’s kind of humorous to see EL listed there, or Enhance Latency, with such loose timings ;) 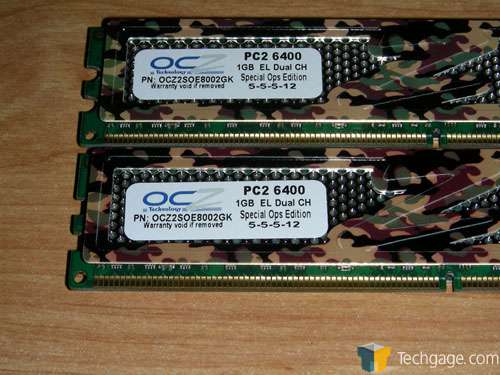 Since the XTC spreaders were launched last fall, they have been accepted by enthusiasts everywhere. There are a couple immediate benefits that the spreaders offer. Firstly, because they are not completely solid, they are lighter than the previous spreaders. Also, the modules can dissipate heat quickly, and adding a fan should prove more beneficial than if they were solid.

So now we come to the camo spreader. The pictures in the OCZ press release don’t do these any justice. These are incredibly sharp looking; perfect for someone who is into war combat type games. There are a few things that I have to question though. The PCB is green and fits the rest of the skin pretty good, but if it was a ‘tad’ darker it would work even better. Also, the honeycomb design on the spreader has been left Gold. It would suit the modules far better if it were dyed light brown or dark green.

Either way, for the first stylized release from OCZ, they are sharp. I am happy to see that they are interested in experimenting, and hope to see more special styles in the future. It’s difficult to figure out a design that suits memory, but the camo was a great start.

Because these were value modules, I didn’t expect too much from them in terms of overclocking. Other Gold modules I have reviewed proved to have -some- extra room to push out extra performance, so I was hoping to get these to at least DDR2-890, or at least tighten the timings a bit. 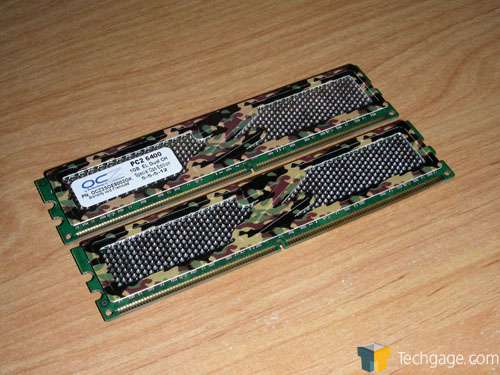 How foolish was I? Surprisingly, these modules had virtually no overclocking appeal. This is no surprise though really, since these are not marketed for overclocker’s, but rather gamers who want a solid performing kit. Here is the list of successful ‘overclocks’.

Any tweaking I did to the modules at all, would result in errors in Windows MemTest. Even tightening the timings to 4-4-4 with 1.9v – 2.4v brought on errors pretty quickly. So overclocking is pretty much out of the question. Though I did overclock and get errors, I benchmarked with the results anyway. You may have better luck than me, but chances are you won’t ;)