I am completely two-sided on these modules to be honest. One one hand, these modules deserve an 8/10 for two reasons. The camo spreader is great looking, and would easily ‘spice’ up any computer. Especially if the person who owns it is a combat sim freak. The stock speeds pass other PC2-6400 kits I have tested… ones that cost twice as much. So, if these spreaders appeal to you and you will be doing -no- overclocking at all, then these are well worth the money. They are priced directly alongside other modules with the same specs, and no more. I had figured there would be a premium to pay for these new spreaders, but that doesn’t seem to be the case. 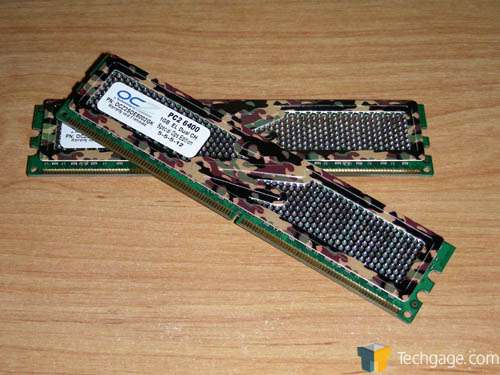 However, if you want the old school Gold spreader version of the modules for the same price, it will save you $20. I am unsure whether both kits use the same chips or not, but I am willing to bet you will get a wee bit more performance out of the Gold’s.

From an enthusiast perspective, these are not worth a second look. They don’t overclock at all… whatsoever. So there’s just no point if you want to tweak your rig. If for some reason you are attached to the look of the spreaders, you should make sure that your CPU overclock will scale properly with the memory, so that you do not go over 400MHz. As I have found out, this memory just straight out doesn’t want to be pushed around. Maybe this was an inside joke. "Yeah, we’ll make combat memory that doesn’t overclock! Soldiers don’t like to be pushed around, so neither will this memory."

I am glad to see OCZ taking a stand and pushing out some different looking spreaders. If you are hoping to see such spreaders on actual enthusiast modules, have no fear. The above picture is of the new Voltage eXtreme 2 modules that will be coming out soon enough. They will debut at DDR2-1000 speeds with 4-4-4-15 timings. The chips capable of this performance… are expensive. So don’t expect these babies to come cheap at all. I do look forward to seeing what new spreaders OCZ unleashes on us in the future though. Bring ’em on!

For what these modules are worth, I am awarding them a 7 out of 10. Though they prove good for a casual user, I was really, really hoping to be able to squeeze at least an ounce of extra performance out of them, but was unable.

If you wish to discuss this review, feel free to head on into our related thread. You do not need to register in order to reply to these threads!