I found it quite difficult to take a picture of the modules to show off their true ‘colors’. Using a flash was pretty much useless, as they appeared to be a single color. As you can see though through the different angles, the colors will change. For instance, looking at front of mine appeared green, but turning to the left appeared blue. I’ve also heard that this special coating that makes this effect possible is also bulletproof. That is one test I am going to leave out of the review though ;)

Like every other OCZ module out there, these ones include a small sticker on the front of each. This includes the model number, speeds, timings and density. I should also note that due to the way the paint is applied, your modules will turn out to have a different color scheme than mine. While mine may look blue at a certain angle, yours may be green. I was not able to find out who’s idea it was to design these spreaders, because nobody will admit it. Regardless, they are great looking. I didn’t expect to like them, but I was proven wrong [not hard to do].

In terms of performance, these are some of the fastest modules the market has to offer. Just a few months ago, PC2-8000 modules were a rarity, but no longer. The market is truly saturated with such modules by at least 8 different companies. Most PC2-8000 kits include 5-5-5 timings though, while these are 4-4-4. There’s been reports of people trimming those timings down even further, but I was unable with my setup. 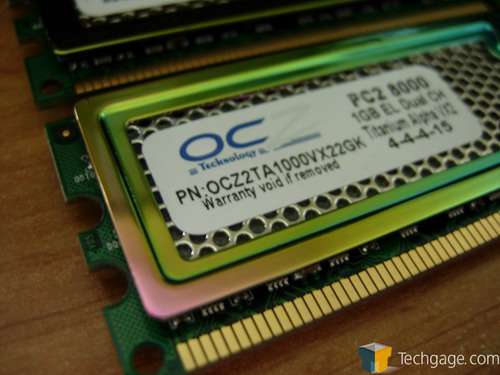 Because these are designed for ‘extreme’ voltage, they will appeal most to the hardcore enthusiast crowd. This means people who are willing to get their hands dirty and spend a LOT of time tweaking to push every last ounce of performance out. The true performance will really be seen on high-end AM2 systems and more so on Conroe. Because Conroe gives you a great amount of control over overclocking various system aspects, great speeds should easily be accomplished.

In terms of overclocking, I wasn’t able to push these much past stock speeds, whether it be tighter timings or higher frequencies. This is not the fault of the modules, but rather my setup. The P5WD2-E and 820 D doesn’t make a truly good combo, as the best I can do FSB wise on the CPU is 280. Here is the list of tested settings I used:

Needless to say, I didn’t get to push it to far. This only confirms my need for a far better CPU, due to other results around the web that I am seeing. According to Tony, there are some who have almost hit DDR2-1200, and others who have hit CAS3 at DDR2-1000. Without a doubt, these are designed by an enthusiast, for enthusiasts. Hard to go wrong there. 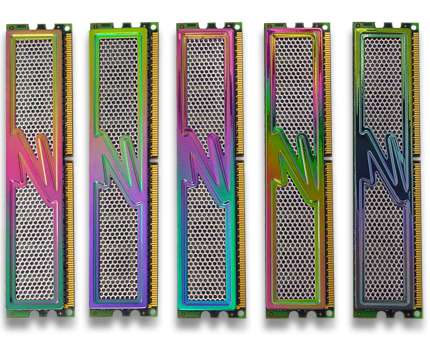 One thing that was brought up to me by my friend Mark, is the fact that these modules are only warranted up to 2.4v +5%, which turns out to be 2.5v. For “Voltage eXtreme” modules that cost around $450US, you would expect that to be a tad higher, at least.