Rugged thumb drives are nothing new, but they are from the folks at OCZ. They recently released their ATV and ATV Turbo drives, ranging from 2GB – 16GB, and have huge promises strapped to them. We put one of each through a battery of “real-world” tests as well as our normal performance testing.

When it comes to PC memory, the name OCZ comes to mind quickly. With a long standing commitment to the enthusiast market and one of the best customer service departments known to man, they sure sell a ton of memory of all shapes and sizes. While I could spend countless pages on their system memory, this review is about USB Flash Drives. High performance USB Flash Drives, to be exact. Just how well these drives stack up is what I set out to explore today.

Data portability has become the norm as of late. Everyone is looking for the easiest way to bring gigabytes of their stuff with them as they travel – in the smallest and safest packaging as possible. Flash cards have been one solution, but then you are stuck either bringing a flash card reader as well, or you have to be certain the PC you will be using to read your card already has the proper format reader. Not the most effective way to do it if you ask me.

The bottom line? USB Flash drives are far more effective and universal to use. Today we are taking an in-depth look at OCZ’s latest ATV thumb drives, the 2GB and 4GB Turbo.

As you can see, they are packaged quite well in a tough plastic shell with a colourful cardboard insert. The back includes all the pertinent information about the drives. 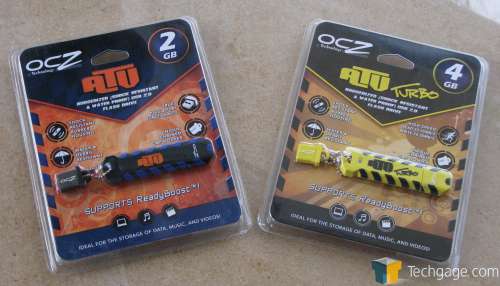 OCZ has developed these new “ruggedized” USB flash drives to make it as easy as possible to bring large amounts of data with you safely. They are also built to take some serious abuse. They are built very well indeed. The included chain and cover holders are also a very nice touch giving you an easy place to store the cover when the drive is in use. 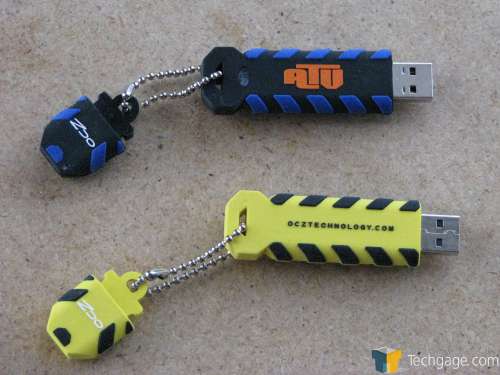 Time to put these drives through their paces.

I tested each stick using HD Tach R/W 3 testing software. I ran each test 3 times and went with the best average run to show here.

Here are the results from the 2GB non-Turbo model: 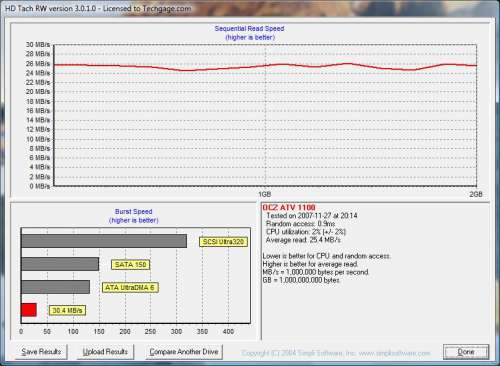 Here were my results for the 4GB Turbo model: 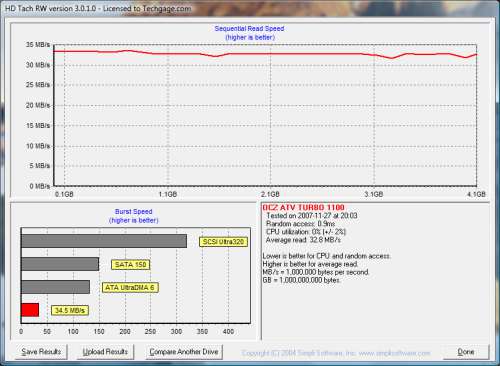 As you can see, the 4GB model was faster, as expected. I also tested both units for Vista Ready Boost compatibility and both were easily able to be used for this feature. When running a system like mine with 4GB of system memory, you wonâ€™t see any major speed increases running Ready Boost, but it is sure nice to have that reserve just in case it is needed.

With our basic testing out of the way, there is only one thing left to do. Kill them! Or at least attempt to.