It’s not too often that memory companies release a new heat spreader. In the case of OCZ, the only difference between all of their heat spreaders are the color… well not anymore. OCZ first announced the new heat spreaders last month. It immediately received a lot of criticism, which is understandable. All too often, when a new style heat spreader is released, it doesn’t make any difference at all! Looking at these ones though, they certainly have potential.

OCZ are obviously giving these heat spreaders a preliminary run, because they are currently only available on the Gold series. Until yesterday, only the 1GB 3200 and 3500 modules were available with XTC, but now the 2GB 3200 and 4000 are also available with XTC. I find this to be an odd choice, since it’s technically value ram, but it may still give us a good idea of what potential they will give. Of course when you take a look at heat spreaders like these, you immediately wonder about the overclocking ability. Well, since the Gold series is not known to be big for overclocking, this will prove more of a challenge. 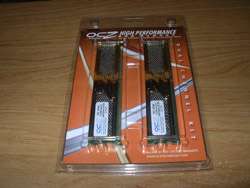 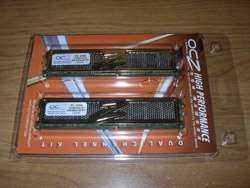 To give you an idea of the average possibility of overclocking the Gold series: When we first reviewed the Gold GX PC3500, we managed a speed of 240, which is 23MHz over stock. At that speed, we were able to retain our 2-2-2 timings, but at 3.2v. Also, in our Gold PC4000 2GB review, we brought the modules up to 263, which is 13MHz above stock.

From those two reviews, we can see that the Gold series is not meant for overclocking. Rather, it’s designed for gamers who want solid memory at a great price. They should be able to pop the modules in, and not think a single thing about overclocking, but still have excellent performance. Either way, being that this is a 1GB kit and PC3200 speeds, I hope that I can muster at least 225MHz.