When talking about performance memory, OCZ is not a name that’s too far from someones tongue. As mentioned in the intro, we are taking a look at the EL PC-3500 (DDR433) Gold GX Dual Channel modules. These sticks are not only meant for enthusiasts who want the best performance, but also people who just want fast memory with tight timings, without being forced to overclock at all. The GX stands for Gamer eXtreme, so it’s obvious who this memory is designed for. Before we go any further, here is a quick bio of OCZ, as well as info about the memory.

Entering the memory market in August 2000, OCZ Technology was built around the determination to manufacture the best high speed DDR and RDRAM. OCZ was founded by enthusiasts, for enthusiasts, and our commitment to the end-user has not digressed. OCZ Technology has been an innovator in many areas. We were the first manufacturer to make Dual Channel optimized memory available to the public, which originally took advantage of nVidia’s Twinbank or Dual DDR architecture, found in their nForce chipset. We have now taken that technology and tailored it for the Canterwood, and Granite Bay chipset’s. OCZ developed and was the first to implement ULN technology, which has been a critical element in our manufacturing process for some time. We at OCZ diligently work to improve communication with CPU and motherboard chipset manufacturers prior to the release of their products. Only in this manner can we fine-tune our memory’s SPD settings, ensuring a synergistic relationship between the memory module, memory controller, and microprocessor. In todays rapidly evolving semiconductor industry, such communication is not simply research, but a necessary component of our manufacturing process. 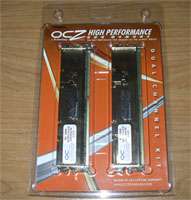 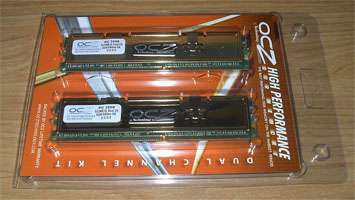 OCZ PC-3500 Gold Gamer eXtreme Series is the latest addition to the extreme-speed Gold Series family. As part of the award winning OCZ Gold series, PC-3500 Gold is built with leading edge technology designed to provide users with unwavering performance features capable of excelling in even the most demanding gaming environments. With the slightly above average voltage of 2.8V, these high-speed modules run at DDR433 and turn out heart-pounding 2-2-2-5 timings with flawless performance and stability necessity for todays PC gamers.