My primary complaint about this memory, is the lack of an overclocking ability. As mentioned earlier though, these modules are not designed for much overclocking, but rather low timings and extreme stability. Because of the goals of the memory, the lack of overclocking will not affect the final score. 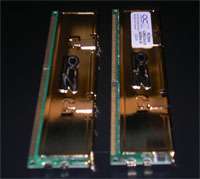 In our previous Ballistix reviews, I mentioned about the MemTest errors that they received, even when they seemed completely stable. With those modules, even stock speeds would give me errors in MemTest, but it’s primarily due to a fussy motherboard. I was quite happy to see that I couldn’t even get a single error in MemTest with the Gold GX modules, even when I tried. All the speeds tested were completely MemTest stable. Since these are not very overclockable, loosening timings would halt MemTest before it could do anything. Therefore, I never got to see an error ;)

Because of the extreme stability and great performance of these modules, we are awarding it a 9 out of a possible 10, along with an Editors Choice award. If you are a gamer who doesn’t want to overclock, these may be the modules for you. They offer great performance and stability out of the box, and leave some leeway if you do want to boost the performance a tad.

Thanks to OCZ for allowing us to review the modules! If you have anything you’d like to comment on about the review, please feel free to leave it in our related THREAD. You do not have to register to post, so what’s your excuse? :)