by Rob Williams on September 12, 2005 in Miscellaneous

Being the hardcore gamers that we are, the need for more than 1GB of memory is becoming evident. Last year, 512MB didn’t cut it, especially when playing top games like Half-Life 2 and Doom III. Now, current and upcoming top games are demanding more than 1GB, like BF2 and FEAR. Today, we are taking a look at a 2GB kit that is designed specifically for gamers.

Last month, we took a look at similar modules, except in a 1GB kit and PC-3500 speeds. We were very impressed with those, because they delivered amazing stock performance and didn’t require much voltage to do so. The only thing I had to complain about, was the lack of overclockability. I must mention again, that all the modules in the Gold series are designed for gamers who want awesome performance out of the box. They are not meant to be overclocked.

Tony Leech of OCZ had this to say over in the BleedinEdge forums about this kit: “Please remember the 4000Gold 2gig is from our gamer range, its not for huge overclocking or high voltages, we have tried to make it very plug and play.3-4-4-8 is the rated timings at 250fsb ,anymore is a bonus and your results will vary.”

With this in mind, let’s get a quick OCZ bio out of the way, then into the heart of the review. 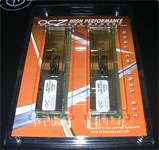 Entering the memory market in August 2000, OCZ Technology was built around the determination to manufacture the best high speed DDR and RDRAM. OCZ was founded by enthusiasts, for enthusiasts, and our commitment to the end-user has not digressed. OCZ Technology has been an innovator in many areas. We were the first manufacturer to make Dual Channel optimized memory available to the public, which originally took advantage of nVidia’s Twinbank or Dual DDR architecture, found in their nForce chipset. We have now taken that technology and tailored it for the Canterwood, and Granite Bay chipset’s. OCZ developed and was the first to implement ULN technology, which has been a critical element in our manufacturing process for some time. We at OCZ diligently work to improve communication with CPU and motherboard chipset manufacturers prior to the release of their products. Only in this manner can we fine-tune our memory’s SPD settings, ensuring a synergistic relationship between the memory module, memory controller, and microprocessor. In todayâ€™s rapidly evolving semiconductor industry, such communication is not simply research, but a necessary component of our manufacturing process.

The new OCZ PC-4000 1GB Gold Edition was developed with gamersâ€™ distinctive needs in mind. The latest generation of PC games, such as Battlefield 2, Half Life 2 and Doom 3, requires large capacity memory to deliver the most powerful, stable system performance. The PC-4000 Gold Edition 2GB dual channel optimized kit is the ultimate memory solution for contemporary graphic-intensive PC titles and provides unsurpassed reliability and performance to unleash every graphic possibility.