The first USB 3.0 storage device to cross out path came last month, in the form of Super Talent’s 32GB SuperCrypt. As the drive was built with the super-fast 3.0 bus in mind, it was easy to expect some good performance, but considering it had internal hardware on par with what we’ve been seeing in 2.5″ solid-state drives, what we ended up seeing was performance that put our mechanical hard drives to shame.

An interesting thing about that drive though, is just how non-interesting it actually was. It didn’t look bad, but it didn’t look all too attractive, either. Instead, it was designed to look like a simple thumb drive, except bloated to support the SSD and USB controllers, and an undoubtedly different PCB design compared to most 2.0 drives. All-in-all, though, even though Super Talent’s drive didn’t wow us on the design, its performance was superb.

Though, there’s nothing wrong with having the best of both worlds. Thanks to OCZ, that looks to be a real possibility. Its Enyo portable SSD was specifically designed not only to offer outstanding performance, but to also become the most stylish USB device you’ve ever owned. It’s a good thing, too, because I’m still having a hard time getting past its strange name.

It’s hard to say why OCZ chose a name like “Enyo” for an SSD, but in Greek mythology (yes, I know… it’s rare to have products named after Greek God’s), Enyo was a war goddess responsible for destructions of cities, usually while accompanying the war god Ares. How this all correlates to an SSD, I’m unsure, but if anything gets destroyed in our testing, I hope it will be the performance numbers from previous drives.

OCZ calls the Enyo a “portable SSD” because that’s exactly what it is. The heart of this beast (or goddess, depending) is equipped with an Indilinx controller for the SSD, and a Symwave controller for the USB 3.0 support. Super Talent’s drive we mentioned at the outset also featured Symwave’s controller, but the company was never able to tell me what SSD controller it used.

Currently, the Enyo comes in three densities: 64GB, 128GB and 256GB. The 64GB model, as you’d expect, is the least-expensive of the bunch, but in addition, it also offers much “slower” speeds. The drive is still ultra-fast, though, featuring an even faster write speed than Super Talent’s drive. The top two Enyo models offer ridiculous speeds, up to 260 MB/s read and 200 MB/s write. Don’t you love USB 3.0?

Anyone seeking an SSD today generally looks for TRIM support, but there’s none of that here. That’s not the fault of OCZ, however. As far as I’m aware, and thanks to an hour worth of searching around the Web, it became clear that unless TRIM happens to come to the USB spec (it likely won’t), then it won’t be a possibility. To make up for this loss, OCZ and others implement “Garbage Collection” algorithms which help keep the drives in tip-top shape – at least, to the best of their ability. I’ll discuss this in more detail later.

I already mentioned that OCZ had a specific goal of producing a stylish drive, and it seems to have done a great job, as I’ve seen words like “sexy” and “ultra-stylish” floating around to describe it. Alright, yes, to be fair, those came from my mouth, but quick searches around the Web will bring up similar sentiments from others! It’s not just the drive that saw some special treatment in the design department, either, as even the box got some attention: 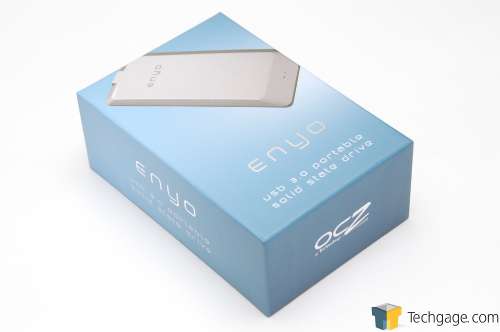 Like a box of chocolates, the Enyo box is comprised of two sections which must be separated from each other to reveal the drive and other goodies. As simple as it looks, the box is actually a little complicated to open, thanks to the power of air working against me. Once opened, though, you’ll be greeted to an Enyo in a protective anti-static bag. Given the overall style and “luxury” appeal of the Enyo, a nice touch would have been to have the bag made of a cotton-like material instead, since that would have added to the style even further. For a device with no components exposed, aside from the USB port, an anti-static bag isn’t really necessary.

Stylish and sleek are two good ways to describe this drive, and hopefully the pictures below explain it better than I can. It might be an external drive, but it’s slimmer than any 2.5″ external hard drive you’ve seen, both width and height-wise. The surface feels like a hard matte plastic to the touch, but it’s actually anodized aluminium. The fact that it doesn’t actually feel like metal is a good thing, and it’s nice to know that if you happen to drop it, it should still come out looking quite decent. It’s a very sturdy drive for only weighing 88g. 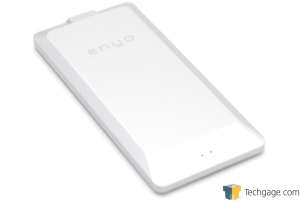 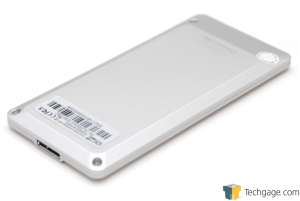 There are no real accessories included with the drive, unless you count a “My SSD is Faster than Your HDD” sticker. Aside from that, there’s an included USB 3.0 cable and a quick-start guide. 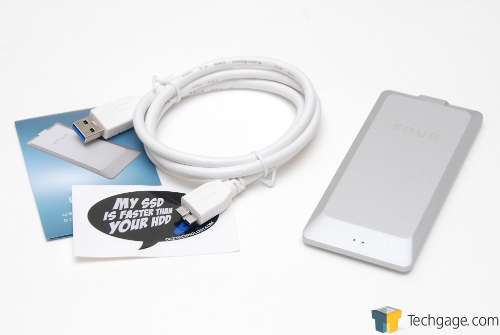 Sometimes it’s hard to gain an appreciation or understanding of the scale of a product without an actual comparison to another, so that’s what we have below. As you can see, the Enyo is clearly much larger than the two other drives, but that’s to be expected. The drive is about 1mm thicker than OCZ’s own Rally 2, but much thinner than Super Talent’s SuperCrypt. Actually, the Enyo almost looks like the result of someone taking Super Talent’s drive and crushing it with 1,000lbs of pressure. Hmm. 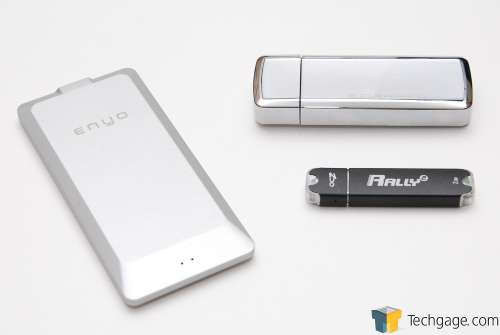 Overall, I’m impressed with both the aesthetics of the Enyo and the package as a whole… as simple as it may be. The drive itself is one of the best-looking models I’ve ever seen, but that of course means little if the performance doesn’t live up to our expectations. So, let’s hook this modest-looking drive up and see just what it’s made of.