It’s no secret that OCZ produces some of the best SSD’s on the planet, if not the best in many cases, and it’s devices like the Enyo that helps keep the company’s name at the forefront of related technologies. This drive is not a typical desktop SSD, no, but it has all of the characteristics of one, aside from the physical and aesthetic design. Let’s face it, no desktop SSD is attractive. But the Enyo is, and when people call an SSD “sexy”, it must be.

Performance aside, the Enyo could almost sell itself based on its looks alone. The unit as a whole is clean, sleek and feels good to hold. It might be light, but it still feels like it has some substance to it, and wouldn’t break after a fall. And thanks to its aluminium chassis, it shouldn’t even have the ability to crack, which is a nice plus when dealing with a portable drive like this.

We’ve covered the fact that the Enyo looks good multiple times, but what about its performance? Well, our results should speak for themselves. Compared to Super Talent’s SuperCrypt drive, the Enyo is far superior. The SuperCrypt did manage to out-pace it in a few select tests, but in 90% of them, including the most important real-world ones, the Enyo came out the undisputed champion. 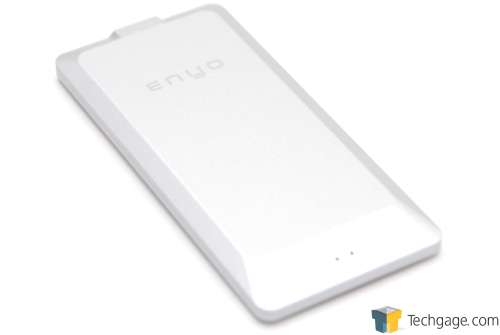 Out of the box, the Enyo can deliver read speeds of over 200MB/s, and write speeds on average of 190MB/s. Our absolutely first transfer (4GB) gave us 185MB/s speeds, while the second, a much larger file (16GB), delivered 195MB/s. We’re not quite reaching the top-limit that OCZ specs the Enyo for, but the performance we did see is simply incredible, and as far as competition goes, there is none.

That might seem like a line straight out of marketing material, but it’s the literal truth. I spent time searching around the Web for comparable devices, and the only models I found aren’t available yet. One example is Kingston’s HyperX, which from performance we saw last month, could provide OCZ its first bit of real competition, and consumers a price war. At least we could hope.

Speaking of price, the Enyo isn’t exactly inexpensive, but that’s to be expected given that it’s an SSD. Compared to other desktop SSD’s, it’s priced competitively, which is nice to see since I had assumed the portable nature of it would result in much higher pricing. For the 64GB drive, one current e-tailer is selling it for $200, the 128GB for $350 and the 256GB for $700. For comparison, the ultra-fast 120GB Vertex 2 we reviewed last month is selling for $330 at the same e-tailer. At Amazon.com, which is the only e-tailer I could find selling Super Talent’s drives, the SuperCrypt 128GB is selling for $473.

For even further comparison, just have a look at 128GB USB 2.0 drives from your favorite e-tailer. You might be surprised to see them selling for almost the exact same price as the Enyo, and of course, you sure don’t get near the same speeds. To be fair, the Enyo is much larger than a regular thumb drive, so it’s not quite as portable, but it’s far from large, and given that most people chuck a thumb drive in a bag, not a pocket, the larger size might not even be a big deal.

The Enyo doesn’t offer any fancy security software like the SuperCrypt, which is unfortunate, but that’s never been a focus of OCZ’s, and I’m not sure it will become one soon (I hope it will). If that lacking feature doesn’t bother you, there currently exists only one USB 3.0 portable option for those looking for the ultimate in performance, and that’s not surprisingly, the Enyo.