by Rob Williams on February 1, 2006 in Miscellaneous

If you are in the market for a 1GB DDR2 kit, then this kit proves to be a great choice. Despite being value memory, it overclocks quite well with the ability to keep stock timings.


Since the EVEREST scores were good, I expected the same from SANDRA. These scores were acquired with version 2005.10.10.69. 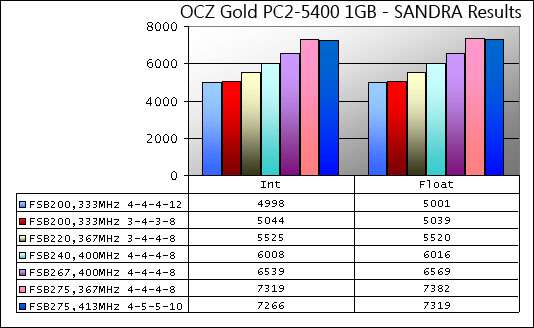 SANDRA results seem to scale quite well with the overclocks. At stock speeds, tightening the CAS and TRP helped improve the score a bit. At FSB 275, the scores were very, very impressive. At DDR2-825 speeds, MemTest brought on no errors but end up scoring less than the same FSB with DDR2-733 speeds. This could be due to lack of cooling on the modules, and I will be testing the modules at those speeds more once I have better cooling in place. Overall though, those are very nice scores. 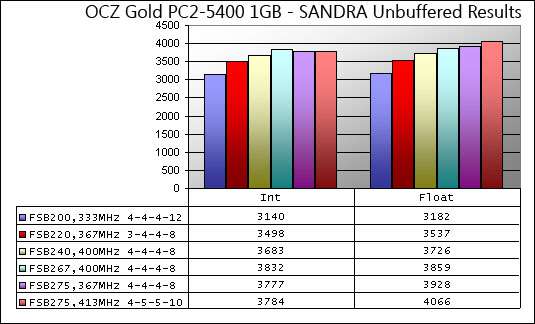 The unbuffered results are just as impressive. If cooling was more efficient, I’m sure that the top two Int results would be closer to 4K if I had efficient cooling in place. Once I add good cooling to the modules, I’m sure that DDR2-825 could keep on with 4-4-4-8 timings with more voltage. I will update the chart if that proves true. Overall, these are great scores; they definitely surprised me.

Not much game benchmarking went on because my CPU was being air cooled and the CPU speed was too overdone to handle games at anything higher than 240FSB. I did perform tests with Half-Life 2, using the d1_canals_07 level, and the results are below. With the next DDR2 review, the system will be water cooled, so you can expect more game related benchmarks.

If you are in the market for a 1GB kit, then you cannot go wrong with this one. The overclocking ability was very good, especially since OCZ consider the Gold series to be ‘value’ modules. Once I get proper cooling in there, I will pump some more voltage into them and see if I can take them even further. A stable overclock of DDR2-825 at 4-5-5 is still quite impressive, either way.

Obviously 1GB is going the way of the dodo, so the only reason why a gamer should really pick up a kit is if they have 2*512MB that they don’t want to get rid of. Of course that will force 2T and slow things down more than needed. If you are interested in a 2GB kit of the similar memory, you can expect a review of another kit in a few weeks.

One downside of this kit is that it’s not currently available on any e-tailer that I can see. I am also unsure of what the cost will be, but I will assume it will be in the $119.99US area. It’s slightly higher than the competition, but I am unable to report of performance differences since this is the first DDR2 kit we have evaluated. If you are going to pick up a 1GB kit though, this is a great choice and you will not regret your choice. Due to the great stability, speed and overclock ability of the modules, I am awarding them a 9/10 and our Editors Choice award.

Feel free to discuss this review in our forums! You do not need to register in order to reply to our content threads. Inputting a nickname would be welcomed though.