by Rob Williams on October 13, 2006 in Miscellaneous

2006 has been quite an exciting year for OCZ thus far. In the early summer, we saw the launch of some fancy new heatspreaders, the Special Ops Edition. Though the public had mixed reactions, it was not too long before we seen a silver version of the same spreader, and also the Ti Alpha. In addition, they launched their Mini-Kart and other useful flash media, in addition to a low profile CPU cooler and even two great new power supplies. The year started off a little slow, but they gained momentum quick.

Company specifics aside, the memory market is fierce and that was well evidenced this year. One company would release -the- killer module, and only days later another company would one-up it. Days after Corsair announced their behemoth PC2-8888 kit, OCZ topped it by announcing their Ti Alpha PC2-9000 DFI special. Sadly, both of these kits are hard to come by, but pack a serious punch.

The kit we are taking a look at today is indeed the DFI Special I just mentioned. It’s called the DFI Special because it was thoroughly tested and tweaked using the latest DFI M2R/G AM2 motherboard. I just so happens to own one of these motherboards, so testing should prove a sinch. Note that this memory does not require that specific motherboard to run, obviously. It’s simply “designed” for it because that was the sole board used during creation. So… they were effectively made for each other.

Before we jump into overclocking and that jazz, lets take a quick look at the modules themselves.

The modules come in the usual orange-backed blister pack that we’ve come to expect from OCZ. It showcases the modules well, and keeps them secure. Since earlier this year, most of OCZ’s modules use the XTC spreader which were first unveiled late last year. These are no exception, and are equipped with the Titanium Alpha flavor. They look like an oil spill, but in a good way. Yes, that is indeed possible. 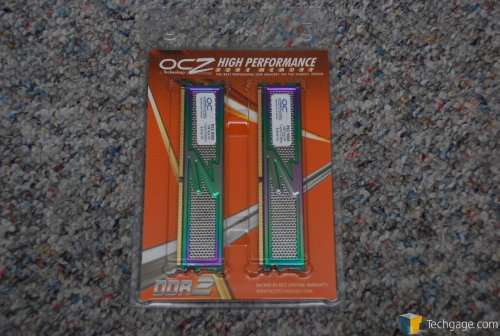 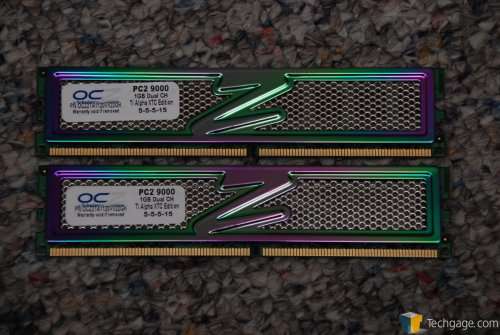 I can say one thing though… these babies are hard to photograph. I believe I took near 100 shots, and I walk away not liking any of them. If any of the batch could be considered the “best”, that’s what I used for this review. Trying to capture the color scheme is difficult!

Though these are the “DFI Special”, the sticker does not reflect this. The speeds are however, at PC2-9000. Timings are an expected 5-5-5-15, and are designed to work with 2.4v. Overvoltage protection on these modules are to 2.45v±5. Essentially, this means your modules will remain under warranty as long as you do not go above 2.57vdimm. This should prove fine, as the VX2’s and 7200 EPP have done PC2-8800 speeds with 4-4-3 timings with only 2.5v.

Ok, what am I doing getting into technical aspects already? Behold a few more pictures: 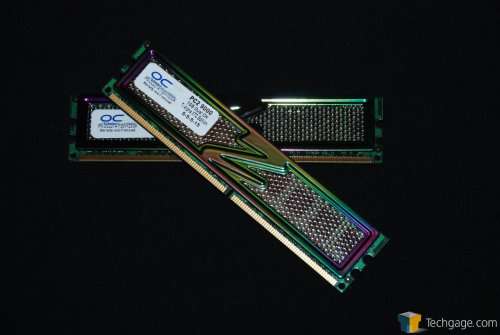 As I blurted out already, these modules are rated for DDR2-1125 speeds, or effective 563MHz. This equates to PC2-9000, or there abouts. For modules of this speed, 5-5-5-15 timings are nothing unexpected. Actually, it’s quite good depending on how you look at things. The Corsair PC2-6400 XMS2PRO modules for instance are rated for 400MHz, a full 163MHz lower than the DFI Special, and have the same stock timings. However, Corsairs more recent Dominator keeps well up to the DFI Specials speeds but retain 4-4-4-12 timings. Impressive, but so will your empty wallet be.

I haven’t the foggiest clue what chips these modules use, but I probably wouldn’t be absurd to jump in and shout Micron D9GMH. These chips, are everywhere. For good reason though. They are relatively cheap (although hard to purchase now) and are rated for 333MHz 2.5ns. They have been used in everything from G. Skills PHU2-6400 kit up to Corsairs Dominator PC2-8888. So, they are apparently quite versatile. Alongside D9GKX, they prove to be an overclockers dream, usually capable of hitting speeds of 600MHz with 5-5-5 timings, whilst remaining nearly stable.

That said, I expected nearly identical results from this memory as I have from other recent top-end modules. Sadly, my AM2 CPU maxes out at 2.85GHz, which in itself is still not 100% stable. So effectively, stock speeds on these modules are near the maximum overclock that my machine can handle. The max tested setting was stock speed of DDR2-1125. DDR2-1140 also proved stable, however there was no sense of re-benchmarking using this setting as it would have proved uneventful in the graphs.

Here are the list of underclocks, and the stock speed that proved 100% stable through MemTest and also 3D Mark 01.

The actual speeds are odd due to the options the DFI gives in the BIOS. They will all be rounded off in the graphs. Before we jump into those though, here is the hardware that the ram will be tested with.

On to our testing methodology and some benchmarking action.