Large capacity hard drives with PMR tend to be surprisingly fast compared to drives as recent as five years ago, but as any enthusiast can attest, a 10,000RPM VelociRaptor hard drive is faster still. And even many non-enthusiasts have taken notice that SSDs are faster than them all, in both throughput and latency. So then that begs the question… what is faster than a SSD? Why two of them in RAID 0 of course!

It didn’t take long for hardcore enthusiasts to capitalize on the SSD phenomenon, and even less time to go one step further. Some keen consumers noted that by combining two small 30-40GB SSDs together in a RAID 0 array they could fix two of the largest issues with small SSDs and mitigate a third. Namely, that doing so would almost double the lower-than-typical SSD performance experienced on these cut-down solid-state drives, while doubling the minuscule capacity they offered.

Yet most of all, with a keen eye a consumer could pick up two 30-40GB boot drives for the same as or even less than the cost of a single SSD with the same total capacity, and end up with better performance at the same time.

SSD manufacturers also were quick to take notice and over the past couple of years have introduced a small variety of solid-state drives that were in effect two (or more) SSDs combined into one package. The obvious caveats crept back in though, with the resulting dual or quad SSD designs fetching a price premium over two stand-alone SSDs of equal capacity. 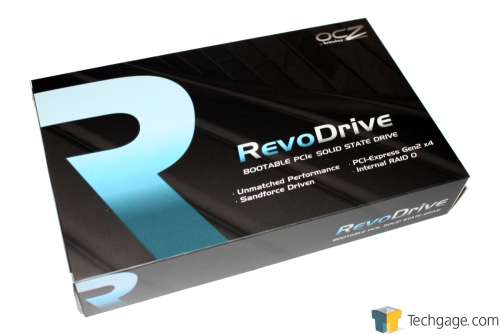 This is what sets the OCZ RevoDrive apart. OCZ Technology is no stranger to combination SSD devices; look no further than the PCIe based Z-Drive or the SATA-based Colossus, for example. With the RevoDrive, OCZ aims to rectify this issue, and states that models will cost marginally more than two discrete OCZ solid-state drives of equal capacity.

There are quite a few benefits for buying a single RevoDrive in place of two SSDs, particularly that the RAID array remains self-contained onboard the PCIe card. This has the dual effect of making the RAID setup transparent to the user. No drivers, software, or BIOS settings need to be configured to enable RAID… it all happens behind the scenes.

Additionally, while admittedly a minor issue for some chipsets, the SATA bus will not have to deal with overhead or data saturation, and finally, users won’t have to shell out more money for a decent performance RAID controller card, or settle for putting their data at unnecessary risk by using Intel’s software RAID controller. 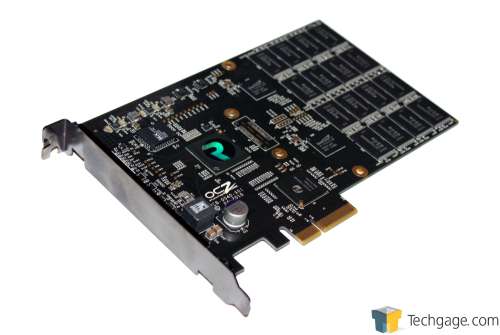 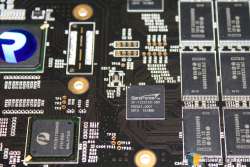 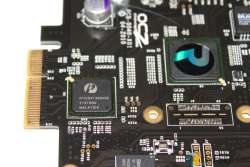 The RevoDrive itself is fairly innocuous looking, at least until peering closer. The slot bracket is a classy black chrome that matches the nearly black PCB. Upon closer inspection we can see the two SandForce SF-1200 controllers, and the PI7C9X130 PCI to PCI Express switch. Although the RAID controller is unmarked save for a holographic R, the Windows 7 installation driver files indicate that it is a Silicon Image SiI 3124.

OCZ Revo drives will range as small as 50GB to as large as 480GB ensuring there should be a model for every price range. Again it is worth mentioning this is a PCI Express x4 drive and can be installed into any x4 or larger slot, therefore completely avoiding the issue of SATA 3Gbit/s versus SATA 6Gbit/s slots and bottlenecks.

The RevoDrive remains bootable, although during the Windows installation process users will need to copy a few RAID drivers to a USB drive and load them before the Windows 7 setup can detect the drive for installation. MLC NAND flash is utilized, and although this is a RAID 0 device, the RevoDrive retains a full three-year warranty.