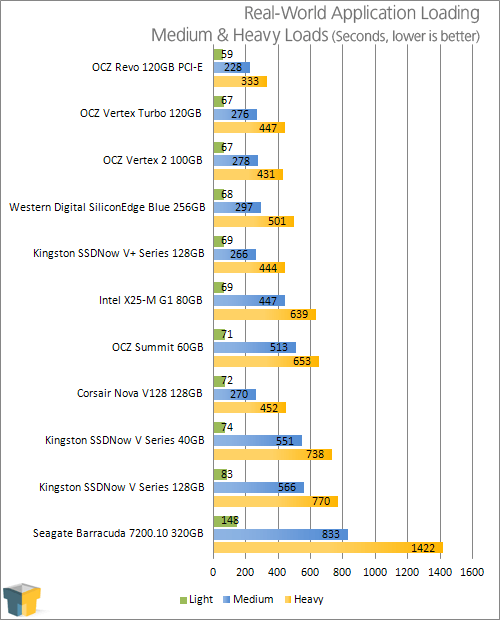 In the time required for a regular hard disk drive computer to boot, it is possible for an SSD to boot and have fully loaded a multitude of programs and files that you regularly use, as the nearly two and a half minutes for the HDD clearly illustrates. For the test platform base level boot time is typically a rather sedate 55 seconds. Loading several Microsoft Office documents in addition to Photoshop only adds an average of 12-15 seconds, in contrast to the mechanical drive which sees its load time more than double by comparison.

Then we have a drive such as the Revo, which one-ups the average SSD and manages to complete the Light load scenario in less than one minute. The average computer user is lucky to have a responsive desktop by one minute, let alone all of their regular programs already loaded and running!

Moving on to the Medium workload scenario the Revo has no trouble shaving a bit over 40 seconds from the best times, which is more impressive considering the test platform is contributing to the bottleneck here. Just as with the Iometer results, it is apparent the Revo’s dual-controller advantage makes it the best choice for intensive I/O workloads.

To add a little perspective, in a little over four minutes the RevoDrive is able to almost halve the time required by the X25-M G1 SSD, partly due to the X25-M G1’s 80MB/s write limitation and lack of TRIM support , yet the competition fairs even worse. The discontinued 40GB V series drive only has half of the normal 10 flash channels and this, as well as the small drive capacity, limit it to a time more than double that (9:11) of the V+ series 128GB SSD. For those like me that are too lazy to do the math, the outclassed mechanical hard disk drive completes the identical scenario in not quite 14 minutes. That’s nearly 10 minutes of time saved just by upgrading to a good quality SSD right there.

As mentioned above the heavy test uses the exact same scenario as the medium test, but includes a concurrent anti-virus scan of a static test folder. Predictable or not, in a five minutes and thirty-two seconds the OCZ RevoDrive sets a new record here as well, knocking 99 seconds off the previous best result. Five and a half minutes is far more palatable than the platter-based drive time which on average required an eye-watering 23 minutes and 42 seconds to complete the same workload.

One thing not shown by our graphs that we like to address is both result consistency and system responsiveness. With the medium scenario the Revo performed all five runs with results that were consistent, although due to the inability for TRIM to pass through the RAID array results did vary a bit more than seen by either the Vertex, Vertex 2, or Nova drives which all support TRIM. As one might expect the Revo never suffered a loss in system responsiveness. Weaker controllers such as the “V” drive’s JMicron controller by comparison had some results differing by as much as several minutes between ones in addition to the system becoming unresponsive, which was clear evidence the controller was becoming overwhelmed from the workload.

Primarily what to take away from these results are which SSD controllers are best suited for high drive I/O workloads. Even with the most brutal of scenarios where several gigabytes of data are simultaneously accessed and written to the drive, SSDs have little to no trouble juggling the loads while maintaining a responsive system. The 120GB OCZ RevoDrive has no trouble stomping over all other single-controller drives in our graphs, and even after reaching a thoroughly “dirty” state results still easily outpaced the competition.