Solid-state drives are the hottest thing in desktop and laptop computers, but affordability is generally considered to be the single largest reason preventing mass adoption. Reliability is always a concern, but actual return rates across the industry tend to be very low, typically ranging from 0.1% to 5% at the high-end of the scale. Instead, price is the main issue with adoption because the NAND flash cost alone usually comprises over three quarters of an SSD’s cost. Given this limitation there are only so many tricks that can be done to mitigate the SSD’s cost.

Buying smaller capacity SSDs is one option, but that only goes so far before it becomes self-defeating. Small SSD caching drives are another, but they are either dependent on chipset technologies (Intel’s SRT) or still require a moderate investment in a discrete SSD with an advanced caching software suite.

OCZ Technology has chosen a relatively unique approach to this problem by combining the longstanding RevoDrive platform with a traditional, 1TB hard disk drive in order to create the RevoDrive Hybrid. The Hybrid comprises a standard pair of SandForce SF-2281 controllers that work in tandem (not RAID); while they can work like an ordinary SSD, they will instead serve as a cache for the hard disk drive. 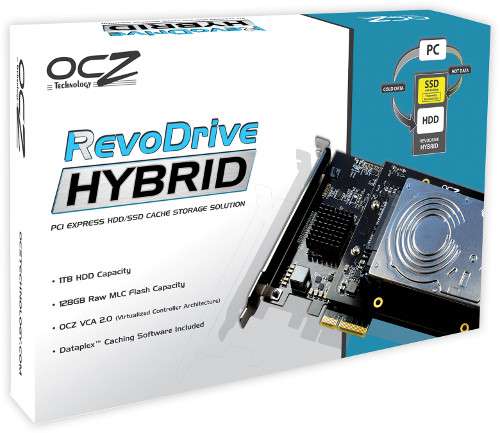 There are a few advantages here. For one, the entire setup is self-contained in a 2-slot wide PCIe card. Second, OCZ doesn’t have to concern itself with possible combinations of SATA controllers, SSD controllers, or the type or speed of hard drive that might be combined. The company can instead specifically tune not only the Dataplex caching software, but also the RevoDrive’s firmware for the Toshiba drive not just to give the best performance, but to more importantly ensure that everything is guaranteed to work together.

Finally, the entire “drive” appears and functions like a 1TB in Windows and will offer SSD levels of performance, but would only have the price of a 120GB SSD and the 1TB disk drive. Needless to say, the RevoDrive Hybrid’s final price is less than even a fourth of a 1TB or two 512GB SSDs!

As mentioned above, the RevoDrive Hybrid is a 2-slot wide PCIe 4x card. PCI Express 2.0 is recommended, but not required. While this necessitates the use of pre-install drivers, it does completely bypass any SATA controller issues. The lack of any full speed SATA III or non-Marvell SATA III ports simply wouldn’t be an issue. The SSD portion is a full 128GB divided between two SandForce SF-2281 controllers, while the 2.5″ laptop drive is a 1TB Toshiba 5,400RPM offering. Unfortunately, for those tinkerers out there already contemplating it, the hard disk drive is not swappable, likely due to firmware optimizations specific to the drive. 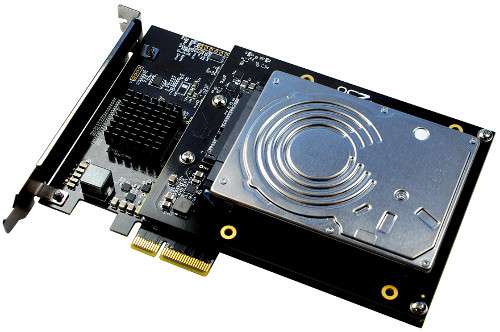 The Hybrid is ready to go and simply needs to be installed, although we strongly suggest users copy down or photograph the Dataplex serial key sticker on the drive first, as it will be needed later! Next, the latest pre-install driver for Windows should be downloaded from the OCZ website to a USB key in order to begin the Windows install process. Yes, due to the Dataplex software itself only, Windows is all that’s supported at the present time. During the install users must be sure to select the largest capacity drive for the caching to properly work. If this is starting to sound rather complicated, OCZ Technology rather conveniently created a step-by-step video guide on YouTube that I would suggest watching in full!

After the install is complete, you need to be sure that the Toshiba drive is selected within the BIOS as the boot drive. Once within Windows itself, users need to register the key on the Hybrid’s product page in order to download the Dataplex software, and will need to input the key a second time during the Dataplex installation. It should be noted that once installed, nobody else can use this key. Should you need to reinstall the OS on the Hybrid or switch it to another computer, you must first uninstall the Dataplex software with an active Internet connection present – otherwise you will find the key locked out and will need to query OCZ support to reset it before it may be used again.