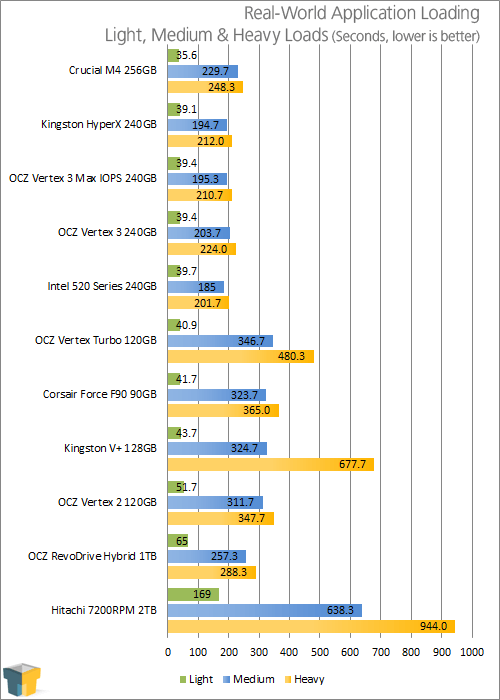 In our light batch test the Hybrid doesn’t fare that well, but let’s look at why. In our cold boot test results averaged to out to 67 seconds, yet the same cold boot with multiple programs and files being loaded turns in an almost identical time of 65 seconds. Even with the margin of error to explain this, basically it means the Hybrid is loading all the programs and files nearly instantly after loading into Windows.

What is actually going on here (and not shown in the graphs) is that the Hybrid is spending a smidge over 20 seconds in its pre-boot state before the system POSTs. Only once the system fully POSTs then things happen at breakneck speeds. However, we test boot times as from the moment the power button is depressed to the point where the OS has finished loading all applications and files, so this long pre-post state hurts the Hybrid’s results here. We aren’t sure why the Hybrid needs such a long initialization process given the first model RevoDrive only took around five seconds, but we can expect the additional synchronization and failsafe protections in place to ensure data integrity between the cache SSD and the HDD will require some additional time as compared to a standard RevoDrive 3 card.

In our medium and heavy batch tests where boot times are not a factor, results are more in line with other high performance solid-state drives, and in fact once again slot into place behind the m4 SSD. Overall the results are a favorable showing for a cache drive given the tens of GBs of data being generated, read, and/or transferred during each single batch test. The stressing, demanding loads even with a concurrent anti-virus scan don’t pose an issue for the RevoDrive Hybrid. If one wants to appreciate just how much of an advantage the Hybrid offers over a recent model yet basic, mechanical disk drive, just keep in mind that the Hybrid finished the medium batch test in almost a third of the time, or finished the heavy test in close to a fourth the overall time!

The batch tests were interesting to watch. At first the results were atrocious, but immediately performance improved by the second run, and continued to improve by the third. In our batch tests where a myriad of programs, files, and tasks are randomly loaded and executed, the Dataplex software has its programming truly put to the test and it certainly held up well. Users can actually expect better performance than that seen here once the Dataplex software learns your typical system usage and builds its data cache accordingly.