by Matthew Harris on November 3, 2006 in Storage

OCZ has got small in a big way. A while back we looked at one of the thinnest thumbdrives on the market from OCZ and today we take a look at another diminutive thumbdrive from OCZ.

If you remember back a couple of months I took a look at the OCZ Mini-Kart which is a thumbdrive that is about as thick as a few credit cards stacked up and just a bit larger than an SD card. Today I’m looking at the OCZ Roadster which is unique in that it folds up into a package that’s barely bigger than the USB connector. Yes, that’s right…the body folds into itself into a footprint that’s roughly an inch long and three quarters of an inch wide.

Let’s take a look at what OCZ says about the Roadster:

The ultra-portable “Top-Down” design of the OCZ Roadster makes data storage and transferring easier and more portable than ever. Best of all, there is no cap to lose with the OCZ Roadster’s modern design. Unlike other convertible drives the Roadster remains ultra portable thanks to a very compact profile that manages to put all the memory components into the connector alone.

The OCZ Roadster is the ideal solution for anyone seeking ultimate portability with their personal USB flash drive; In addition, the Roadster’s small footprint means you’ll never have to unplug surrounding USB ports to make room, a common problem with many oversized competitor drives. Users can access files stored on the Roadster from the convenience of any USB port thanks to True “Plug and Play” functionality. Instantaneously play music, view images, or open files as if the Roadster was an onboard hard drive.

OCZ is committed to providing superior products and service to our customers.The OCZ Roadster is designed to be the most portable convertible USB flash memory drive on the market and comes backed with a 3 year warranty for the ultimate peace of mind. 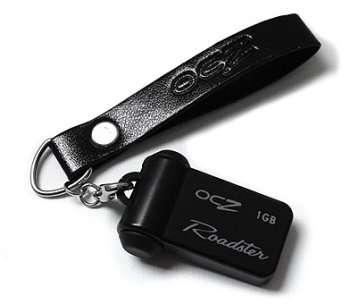 Tiny isn’t it? The roadster comes packed in a blister pack that requires the obligatory chainsaw to get open, I understand the reasoning behind these packages as they prevent theft but it doesn’t mean I like them. Trying to open one can lead to accidental dismemberment if one has anything but the sharpest knife at hand. 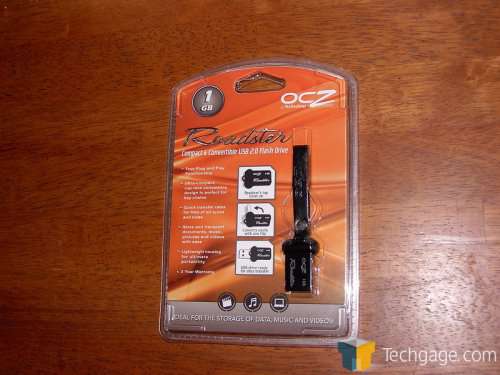 The package shows the highlights of the Roadster on the front and displays it quite nicely. Note that this time I did get the lanyard :-) Thanks OCZ! Sadly I STILL haven’t recieved the lanyard for the Mini-Kart, what’s up with that guys? 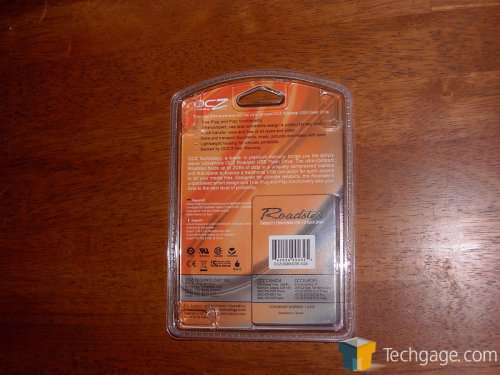 The back of the package features a bit more verbiage paying tribute the the Roadster and a rather odd bulge. 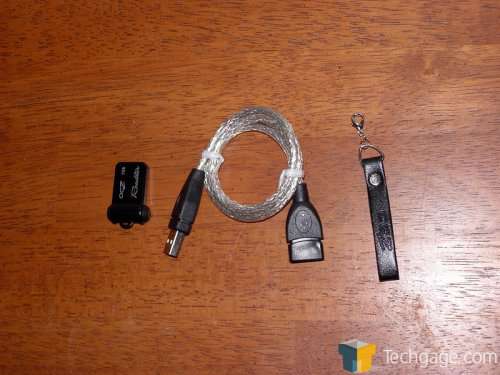 Hidden inside the bulge in the blister pack is an USB extension cable about eighteen inches long. This is great if you don’t have free front USB ports, this means that you only have to muck about at the back of the PC once. Nice touch. You also see that the Roadster is roughly half it’s overall length when folded up. 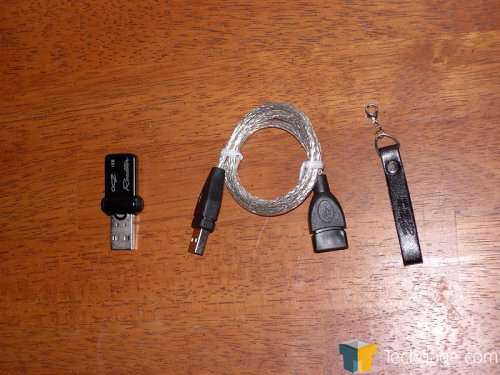 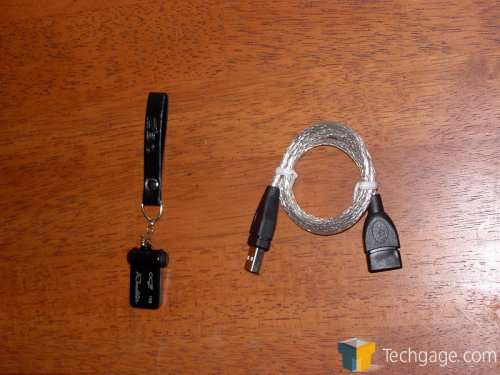 With the lanyard attached the Roadster is the epitome of portability, just grab it and pop it in your pocket and go. The connector is folded safely away where it won’t be in harms way unlike the Mini-Kart. That was my one complaint with that thumbdrive, it just seemed so exposed to danger. 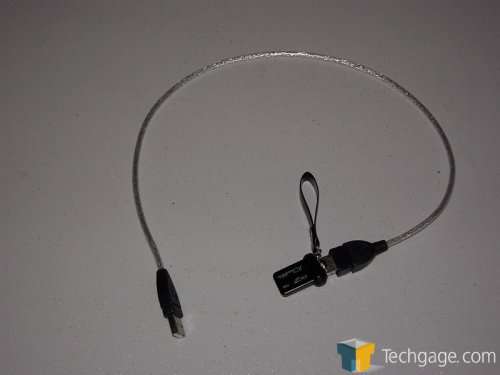 Yep, that’s the cable and the Roadster plugged into each other. You can’t see it here but the lanyard stops the roadster from swinging a full 180* so the shell stays cocked at less that a stright line when open. 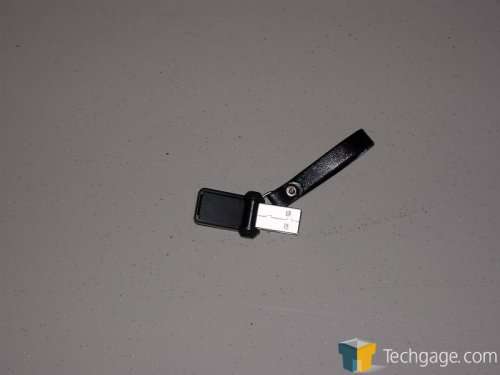 Here’s a look at the backside of the Roadster, as you can see the shell is devoid of any circuitry. 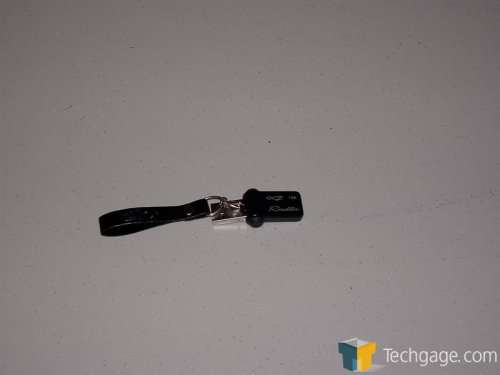 Here’s a better look at how the shell doesn’t open fully with the lanyard attached, not a big deal but wouldn’t it have made sense to put the mount for the lanyard at and angle to allow the lid to flip fully? 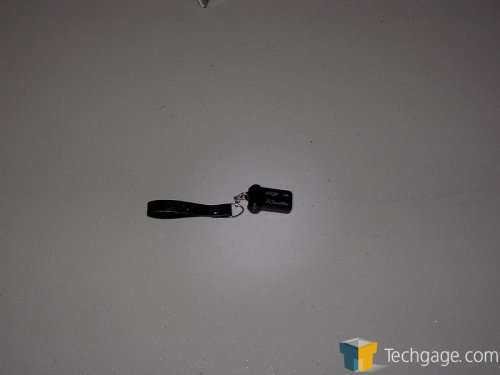 And a final parting shot of the Roadster folded up and ready to haul. Quite the tidy package isn’t it? I’ve been using it for a few weeks now and I don’t have any complaints. It’s great for storing songs and photos. The transfer rates are identical to the Mini-Kart so I’m not going to waste your time with them, just a tad under 9Mb/s in HD Tach and right around 7Mb/s in HD Tune. The random access times are the same as are the burst rates so it makes me wonder if the Roadster is essentially the same animal in different clothes.

Overall I’m impressed with the Roadster. It’s not as thin as the Mini-Kart but it’s very portable and the folding design makes for a more secure portable storage device that won’t make you sweat having it bouncing around in your pocket. Add to that the handy cable provided for those of us that are strapped for front USB ports and you’ve got a very flexible package that won’t put the hurt on your pocketbook at around $25.00. I’m awarding the OCZ Roadster a 9/10 and our Editor’s Choice award for being and outstanding product with ease of use. It loses a point since it’s limited to one gig and only one gig. If you’re wanting a larger drive you’ll have to look elsewhere.