Solid-state drives have always held a bit of a fascination with me, at least ever since 2008 when Intel brought them to the attention of the consumer market. SSDs have progressed a long ways in the three years since, a feat I find particularly underscored by the SSD in today’s review.

The simple fact is, there isn’t another part of the computer industry where leaps of 50% let alone 100% or more are still occurring with every successive generation of hardware. The change from the SandForce-based SF-1200 to the SF-2281 controller that powers the OCZ Vertex 3 solid-state drive is one of those leaps.

Granted, the new SATA 6Gb/s interface featured on the Vertex 3 has a significant role in the new levels of performance, but it is only due to the SandForce controller that the Vertex 3 is able to set new levels of performance previously only seen from dual and even quad-controllers in RAID 0 before now. It should therefore go without saying that consumers wishing to get the full performance out of a Vertex 3 or Agility 3 SSD will need a system or laptop with an available SATA 6Gb/s port. 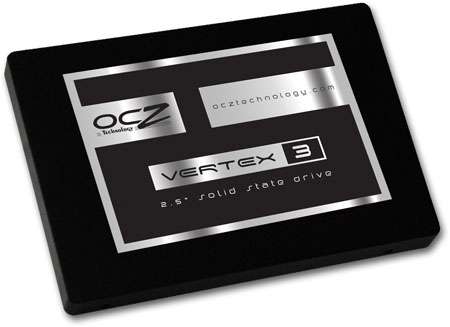 The Vertex is OCZ’s premier model of solid-state drive. Like the Agility 3, the Vertex 3 is powered by a SF-2281 controller and features a SATA 6Gb/s interface, but after that things begin to differ slightly. The Vertex 3 makes use of Intel’s 25nm MLC NAND and uses a custom PCB of OCZ’s own design.

The Vertex 3 series is offered in capacities of 120GB, 240GB, and 480GB, all of which feature slightly over 12% of the given capacity as spare area. This “over-provisioning” of the SSD allows it to better maintain performance when full and provides a scratch area to replace any NAND sectors as they wear out, but is why the capacity seen within the OS is lower than what is listed on the box. Curiously the Vertex 3 datasheet shows an un-mentioned 60GB model, so it is possible a more affordable 60GB model Vertex 3 may show up within the near future.

As with past OCZ drives the Vertex 3 comes in a small package which includes the mounting screws and a solid metal 3.5″ bay adapter, which serves double-duty as a layer of armor plating during shipment. The plastic top drive housing leaves a little something to be desired, but that’s purely a cosmetic quibble.

For those curious, it is worth mentioning that OCZ also offers Agility 3 and Solid 3 solid-state drives. The Agility 3 uses less expensive NAND and will offer a few percentage points lower performance because of it, but otherwise remains identical to the Vertex series. The Solid 3 is the value offering, and although it still uses a SF-2281 controller it appears to halve the NAND chips on the PCB, which would explain why its listed performance drops so much. In any event the Solid 3 doesn’t appear to be available yet, but we would easily recommend the Agility 3 as the price/performance sweet spot to the Vertex 3.